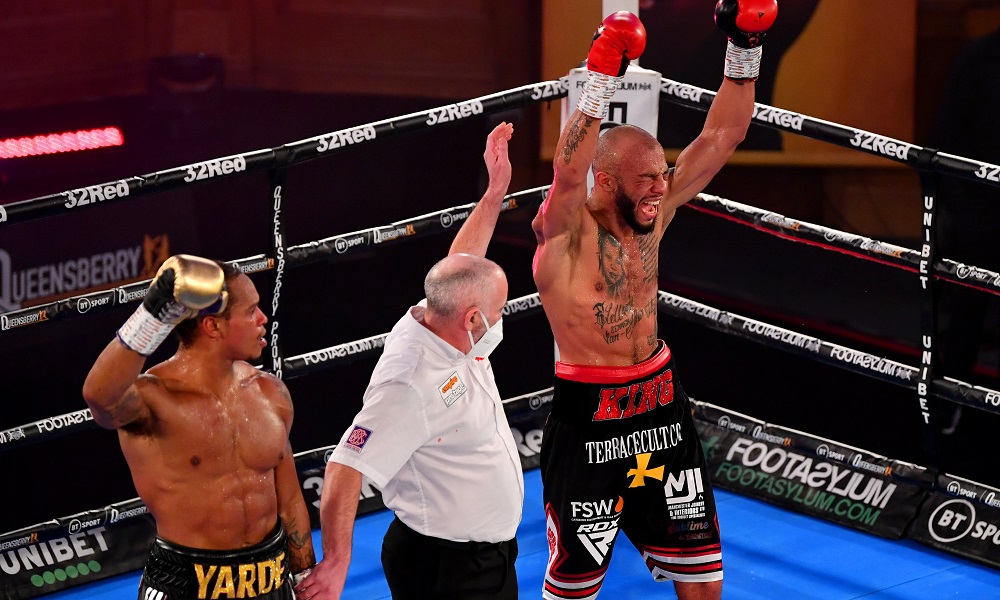 No sport divides opinion like boxing. One man’s G.O.A.T is another man’s donkey. Opinions vary wildly and far too often, ‘politricks’ – as Lennox Lewis famously described the obstacles that prevent the best from fighting the best – stop the arguments from being settled.

Britain has a whole host of top light heavyweights and with Lyndon Arthur, Anthony Yarde and Callum Johnson all competing on BT Sport, fight fans should get to find out who the top dog truly is over the next year. For all the latest fight odds, visit our sportsbook.

Arthur returns to action this weekend for the first time since beating Yarde in a tense meeting last December whilst the exciting Johnson also lurks menacingly, waiting for his next opportunity.

Arthur is the only one of the trio to still have his unbeaten record but Yarde and Johnson have both tested their credentials at the highest level, each finding themselves a punch or two from world title glory. Yarde hurt Sergei Kovalev before fading and being stopped and Johnson floored Artur Beterbiev before losing a wild shoot out.

As the three fighters find themselves on an almost inevitable collision course, 32Red decided to canvas a few opinions. We caught up with Carl Greaves – who has faced both Yarde and Arthur with his fighter, Dec Spelman – British boxing legend Billy Graham, journalist Steve Lillis and comedian, Travis Jay – host of the Undefeated Podcast – to find out what they like about the fighters and who they feel will go the furthest. 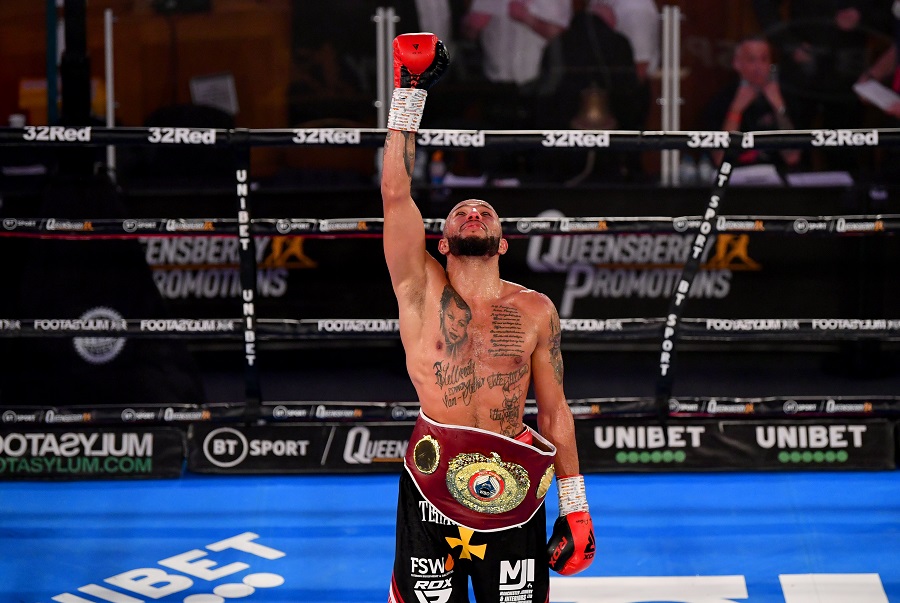 There are no right or wrong answers. As we said, boxing is a sport of opinions. What do you think?

32Red: Lyndon uses a laser-like jab to set up his attacks, Anthony is patient and explodes into action while Callum is an aggressive seek and destroy merchant. Whose style of offence do you prefer?

Carl Greaves: I like Callum’s aggression. He just takes chances doesn’t he? He’s just ferocious and takes risks which makes him really exciting to watch. He’s very, very heavy-handed and when you’re heavy handed you can take more risks.

Billy Graham: I like all of them to be honest. Wow, f***ing hell. I can’t choose. Callum had Beterbiev down and he’s a monster. I like how Yarde can be patient and then explode like lightning. I love Lyndon’s style of fighting, he’s really relaxed and he has more than just a great jab. He has a bit of power too. I like Johnson and he’ll fight absolutely anybody. I like them all. When I think about it, I probably prefer to watch Callum. It’s kill or be killed with him.

Steve Lillis: Callum Johnson. He knows he’s at the tail end of his career and he’s going out to have wars and that’s what people want to watch. Longevity wise, Lyndon and Anthony are the ones but, right now, if you put the three of them on TV screens in competitive fights and I had to choose one to watch it’d be Callum. Look at the Beterbiev fight. Could you imagine the other two having a burn up like that? Yarde goes for the knockout and had the exciting fight with Kovalev but is he a warmonger?

Travis Jay: I’d have to say I like Yarde’s patience, especially when combined with the type of power he has. It makes for a very deceptive aggressor because he comes forward and forces his opponent to react without exerting much energy. I do like Lyndon’s jab, I think it’s effective but outside of that I’m not blown away by the rest of his arsenal. I enjoy watching Callum blast through guys but as an offensive package I prefer Anthony Yarde. 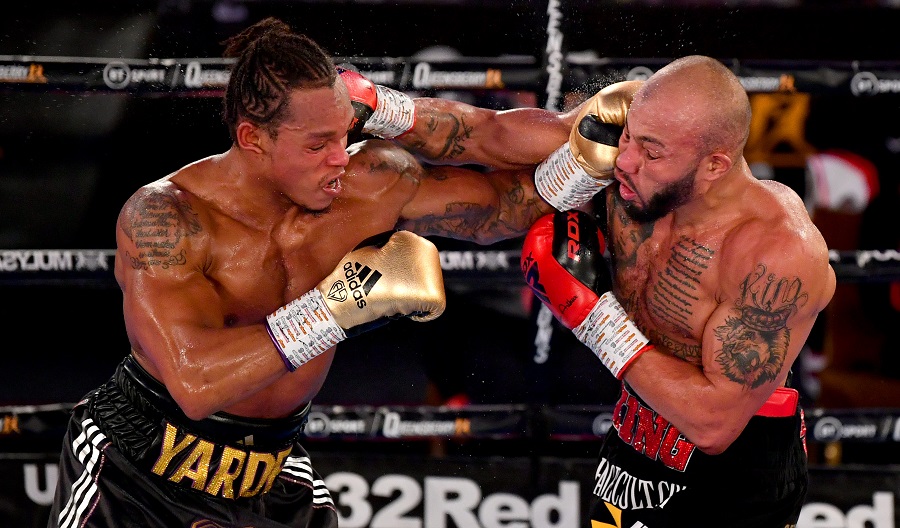 32Red: When it comes to avoiding punches, again the fighters all employ different styles. Lyndon has the most ‘traditional’ defence of the three, Anthony relies on his reactions and a shoulder roll whilst Callum seems to consider attack the best form of defence. Whose style do you like?

CG: I think Lyndon has the best defence. He can box quite negatively but when he is boxing that way he still manages to be effective with the jab and its difficult to land clean on him. I do like the way he boxes. From what I can gather, [his trainer] Pat Barrett works on defence a lot in the gym and Lyndon does have a really good defence.

BG: This is hard. I like them all! Right, for my taste, I like aggressive fighters and I love aggressive counter punchers and that’s what Anthony Yarde is. Athletically the most gifted of the group is Yarde. That’s not saying he’ll beat the other two if and when they fight each other but that’s the style I like.

SL: You love attack to be the best form of defence. It’s like watching a football match when both teams go at it but Lyndon showed in the Yarde fight that his defences are in the highest echelon of the game. If you think how he neutralised what Yarde had until the twelfth round, it might not have the excitement of Yarde or Callum but you have to appreciate that. Forget people having a go at Yarde’s performance that night. It was down to Lyndon and his defensive qualities. Not getting hit until the twelfth round by an aggressive puncher like that is some achievement and I don’t think enough credit is given to Lyndon’s defensive abilities.

TJ: Defensively I’d say Yarde again. Because he is so patient it usually means he is defensively aware. He manages the range very well and you rarely see Yarde take a big shot clean, even then he rolls punches really well. It’s usually those instances when Yarde is resting on the ropes when he slips and lands a counter that can turn the tide of a fight. 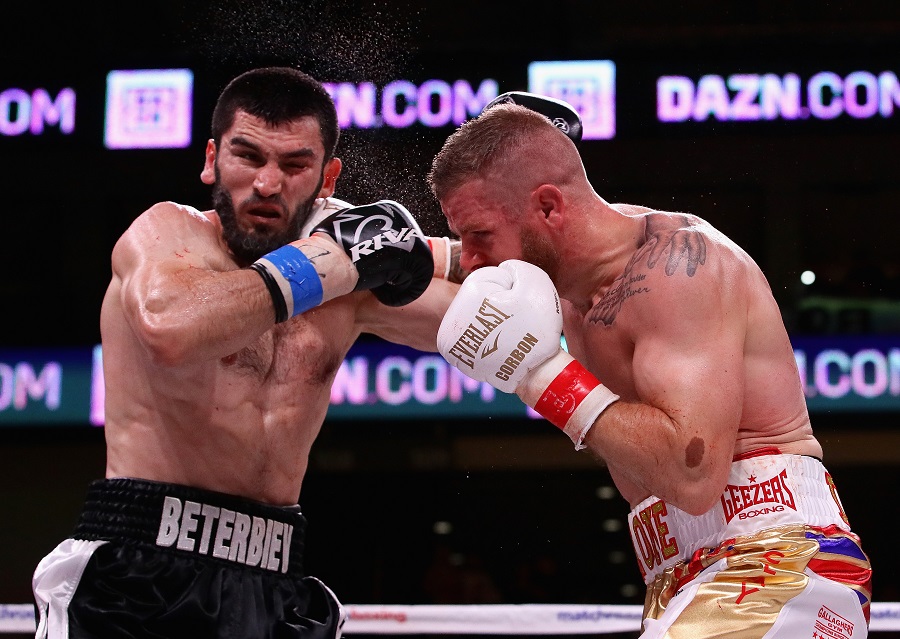 32Red: When all is said and done, which of the three do you see going the furthest and achieving the most?

CG: I think at this moment in time, Lyndon is the up and coming one who hasn’t been beaten. Callum is probably going to get the opportunity now because he’s already fought at a high level and Yarde is still rebuilding after losing to Lyndon. I think Callum will get the next opportunity. It’s hard to say who will go furthest. Callum has heavy hands and takes risks so he’ll always have a shout. Lyndon has fantastic boxing ability and Yarde, I don’t know. He’s a bit hit and miss. I would say Callum Johnson at the moment.

BG: I think out of the three of them, Anthony Yarde has the most raw materials. He’s got the natural ability, reflexes and athleticism to go the furthest of them. Any of the three could beat each other though. Without a doubt, Callum can knock anybody out but I do think Anthony fought terribly when he boxed Arthur.

SL: This is really tricky. Two have already had world title fights and been heroic losers. This is so hard. Do you know what? I guess it all depends on whether Callum loses before he gets to that world title fight. That’s a real tough question. I can say straight away that Callum is the one I’d want to watch and that Lyndon has the best defence but that question is really tricky. I don’t like sitting on the fence so I’ll say Johnson.

TJ: I believe Yarde will achieve the most, although he fell short to Arthur. It was a very close fight (many had him winning) and I believe the outcome of that fight shifts considerably with a change of gameplan from Yarde as we saw in the 11th and 12th, when he put the foot down he almost got the stoppage. I believe Yarde has the higher ceiling out of the three, I’ve got respect for both Callum and Lyndon and wouldn’t be surprised to see them all hold a world title before they hang ‘em up. I just think Yarde has the attributes and as soon as it comes together, I think he’ll take things to the next level.