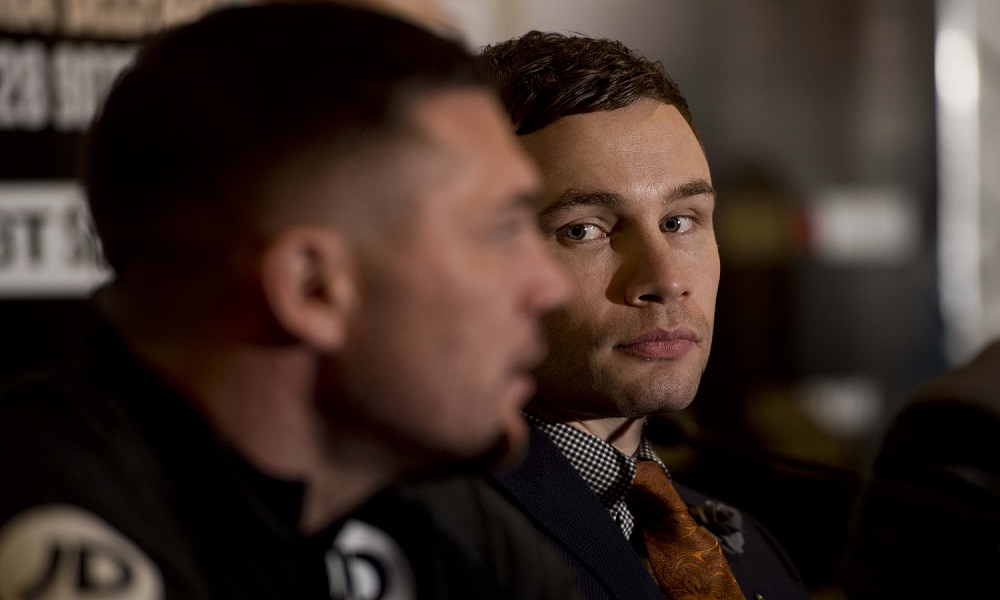 One of the most talent-laden divisions in boxing, the featherweight picture is set to shake itself out over the coming months with a whole host of top tier match ups scheduled. Former two weight world champion and 32Red ambassador, Carl Frampton, kicks things off when he faces Nonito Donaire for the interim WBO world title at a sold out SSE Arena in Belfast this Saturday night.  Find the latest odds for Saturday’s fight here.

Donaire (38-4, 24 KO’s) is one of the most highly decorated fighters of recent times. A four-weight world champion, the 35-year-old was a staple of pound for pound lists for the best part of a decade but is nearing the end of an illustrious career. Frampton’s scalp would catapult him right back onto centre stage and the Northern Irish hero is fully aware of the threat that a desperate Donaire will pose on Saturday night.

“I’ve been watching Nonito for a lot of years. I’ve been speaking about him as a potential rival for a long time but I was watching him as a fan before that,” Frampton (24-1, 14 KO’s) told 32Red. “I know a lot about him but obviously when the fight is agreed you do study him a bit more but I think I know enough about him not to have to study him too much. To be honest, it’d put my head away constantly watching a fighter, especially one like Donaire who has one of the best KO ratings going. You don’t want to be watching that all the time. I let Jamie do it.”

The fight will be the most high profile test yet of Jamie Moore’s training credentials. The Salford-born trainer had been considering retirement until a sudden influx of talent filled his gym and altered his way of thinking. The former British and European junior middleweight champion is a fight aficionado and has spent hours watching Donaire’s rise through the weight classes as a fan.

Now, rather than admiring the Filipino’s work, he is charged with plotting his downfall and Moore is fully aware that he can’t allow images of ‘The Filipino Flash’ starching opponents like Fernando Montiel and Vic Darchinyan to colour his judgement of what this version of Donaire is capable of.

“I think every fight is like that,” Moore said. “As Carl says, we know Donaire’s strengths so when we watch him now it’s more about looking at his weaknesses and the things he doesn’t do so well and maybe manoeuvring him into positions where he might make mistakes.

“The fighters you might be forgiven for taking your eye off the ball with, you have to give them more respect to make sure you don’t make mistakes. When you have somebody like Donaire who you have massive amounts of respect for, you have to bring yourself back down to earth a bit. Don’t get caught up in the hype. Let’s set out what he does well, what he maybe doesn’t do as well and set out two or three different gameplans to deal with that. It’s all about having the right fighter in your corner, and I’ve got a phenomenal fighter.”

A successful training camp in Tenerife earned Frampton, Conrad Cummings and Steven Ward the collective nickname ‘The Irish Kenyans’ due to their running prowess and since their return, the day-to-day work in the gym has been supplemented by hi-tech sessions at the Manchester Institute of Health and Performance. Yet maybe the most important aspect of this training camp has been the camaraderie Framptom has struck up with his new gym mates in Manchester.

Rubbing shoulders with the likes of Martin Murray, Rocky Fielding, Jack Catterall and Tommy Coyle on a daily basis has reinvigorated Frampton at a crucial stage of his career and he is now fully into his groove with Moore after a hurried first outing last November.

“There was a lot going on before the Horacio Garcia fight,” Frampton said of the unanimous ten-round decision victory.“I had a shorter than usual camp of eight weeks. I usually like twelve weeks so it was shorter than I’d had for a long time. There was a lot going on behind the scenes as well. In fairness, I was a bit critical of myself immediately after and in the weeks following the fight.

“When I look back, at stages it was the best I’ve boxed in a long time. I was doing things that were brilliant. I got a bit tired and got dragged into a fight. I think a lot of it was to do with the so-called knockdown. I understood why it was called a knockdown. He touched me while I was on the way down but it was definitely a slip. After that, I tried to get a bit macho.

“I trust Jamie and I listen to everything he says and try to replicate it in the ring. Against Garcia there were rounds that I was almost giving away because I was trying new things out. You can’t really do that against somebody like Nonito Donaire. Things need to go perfectly on the night.

“I don’t want to speak for all the other lads but I think it definitely helps training alongside each other. We’re all training for big fights and we’re pushing each other on. Every day you’re watching what the next man is doing on the bag and trying to make sure he isn’t doing more than you. We’re all pushing each other on and physically and mentally I’m in a good place. Everything is going to plan.

“I’m 31 and I’m enjoying it more than I’ve ever done. People talk about me coming to the last couple of years of my career but I don’t know how long I’ve got left. As long as I’m feeling like this, I want to continue to keep doing it.”

David Price – Full Video on the build up to tonight’s fight!
Carl Frampton spills the beans on his gym mates