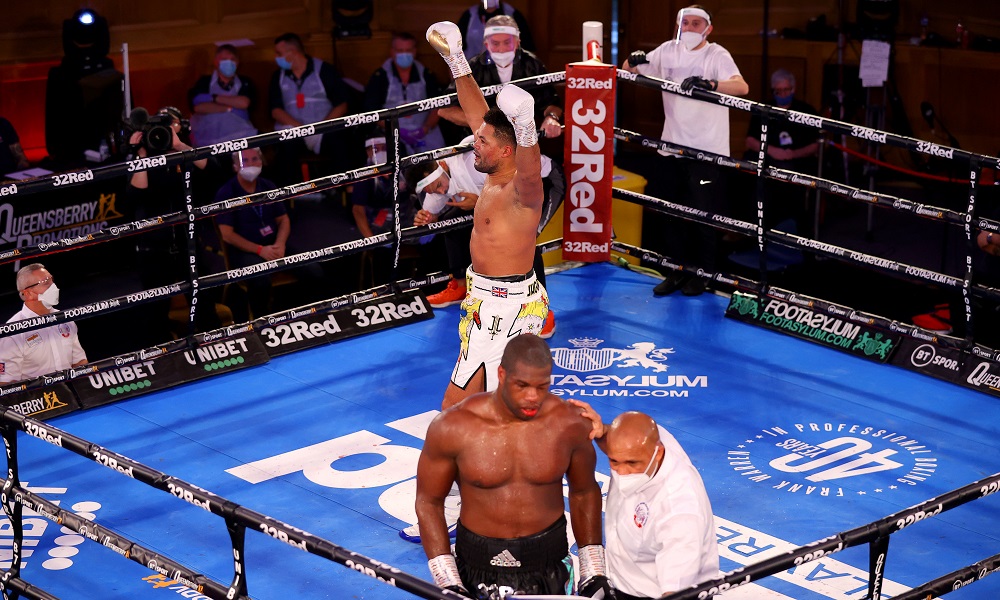 The dust hasn’t been allowed to settle on Joe Joyce’s victory over Daniel Dubois yet. The dramatic ending to the fight has kept theories and opinions swirling around. For our latest odds on forthcoming fights, visit our sportsbook.

Beaten boxers are quickly consigned to the scrap heap these days but those who have betrayed the unwritten ‘code’ of the sport and waved the white flag of surrender are tossed beyond the scrapheap to some God forsaken corner of the sport. Forget the seven rounds that Dubois boxed with severe facial damage, the 15 or so seconds between him taking the sickening final jab and the fight being waved off in the 10th round are the scenes that will remain burned into fight fans’ memories.

A promoter has to make careful and timely moves to rebuild any beaten fighter. When a fighter has been so imposing and dominant and is then widely perceived as having quit, it makes the job much tougher.

“It does but that’s what we have to deal with and we’ve brought fighters back before,” Frank Warren told 32Red. “It’s the same thing as when Vitali Klitschko fought Chris Byrd and everybody said he swallowed it. He said he was in excruciating pain and couldn’t continue. Look, if you’ve got a damaged nerve and a broken eye socket what are you gonna do? End up with a metal plate in your face?

“There was nothing in the fight. The harder shots were coming from Daniel but Joe had the volume. It was a keenly fought fight and Joe did what he had to do. His advantage was the eye and he worked on it. Daniel was complaining in the corner after about the sixth that something wasn’t right and he was getting a searing pain but it is what it is.”

Dubois wasn’t at his commanding best last weekend. He lost the battle of the jabs and Joyce’s movement prevented him from landing his right hand regularly. There will be a lot of negativity flying at him in coming months so keeping the positives in mind will be important. It won’t be much comfort now but despite his injury, he played a full part in a nip and tuck fight.

“Daniel never took a hiding in the fight,” Warren said. “People were saying it was his lack of experience but he was matching Joe and he was in front [on the scorecards]. What did come into it was the fact that Joe caught him with a good shot early and broke his eye socket. Daniel dealt with the experience. He couldn’t deal with the fact that his eye was knackered. The tempo in the fight and the amount of punches thrown were staggering. 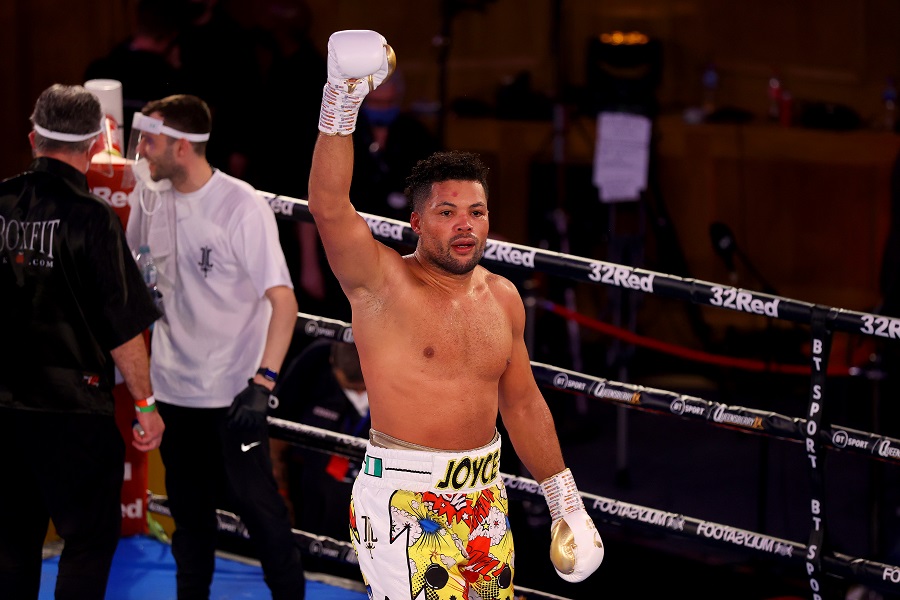 “People are entitled to their opinion about quitting. That’s up to them to say. It does put Daniel under pressure when he comes back to show he can deal with it. If he can’t, he’s wasting his time in the sport.“

We’ve done it again. Poor Joe Joyce has had a tremendous victory overshadowed. Joyce was outstanding last weekend, mixing his usual toughness with an outstanding jab and punch perfect fight plan. Joyce is in perfect position to fight for a world title in 2021. Depending on what Anthony Joshua [or Kubrat Pulev] decides to do with the WBO belt, Joyce v Oleksandr Usyk may be a go for next year.

“People forget we paid hundreds of thousands of dollars to buy his contract from Richard Scaheffer and invested in him and the fight,” said Warren. “I’m sure down the road I think people would buy into a rematch but in the meantime Joe’s got to just focus on doing what’s good for him and that is going to involve him being in some big fights. We have to deliver them.

“Joe’s not the fastest but he’s got his work rate. Who would you back out of Chisora and Joe? I’d back Joe every time. Usyk was an outstanding cruiserweight. He hasn’t impressed me as a heavyweight yet. How old is he? 33 or 34? You’re not going to grow into a heavyweight at that age. When he’s got in the ring at heavyweight, he’s probably had all the breakfasts and dinners he’s wanted to eat and didn’t have to worry about making cruiserweight and he was still a light guy. I don’t think at the top level he’s gonna be big enough.”

Boxing fans get another treat this weekend when Anthony Yarde takes on Lyndon Arthur. The manner of Dubois’ defeat seems likely to pose him some extra problems but Yarde didn’t allow last year’s loss to Sergei Kovalev to dampen his natural enthusiasm and confidence. Yarde proved to himself that he had the beating of the great Russian and believes that on a different night, in a different place, he could have taken Kovalev’s scalp. Dubois is a self contained character and when he is ready to get back amongst the muck and bullets, his team will need to press exactly the right buttons to get him back on track. Warren accepts that as well as rebuilding Dubois mentally there are a couple of technical improvements to be made.

“With Daniel, he’s got to improve his head movement,” Warren said. “He’s basically gotta go back and look at the fight and see what he can do to improve but the bottom line is that he’s a young kid. Even after the fight, if he’d have come through it I’d have still been saying that he has to keep working on his head movement, even Martin [Bowers, his trainer] knows it. 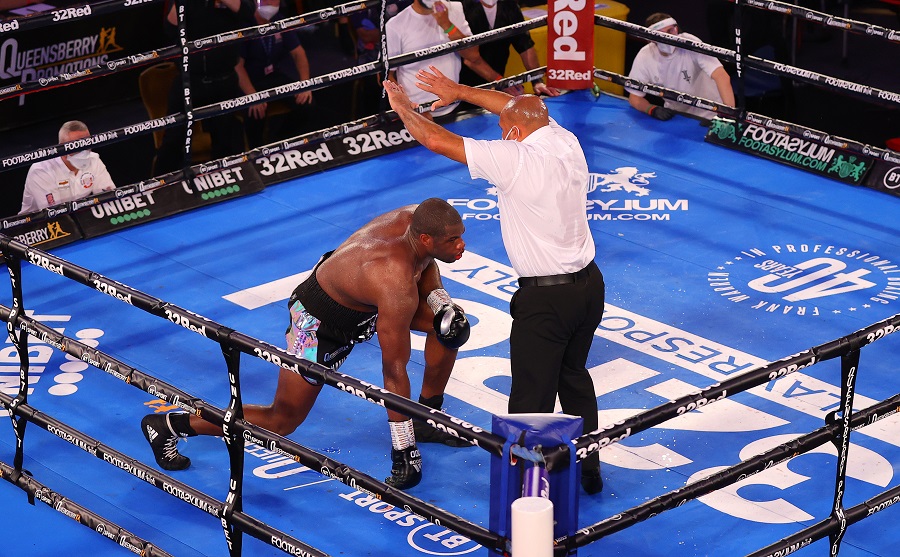 “I think he’s capable. I was very disappointed but I do think he can do it. At the end of the day, we’re going to find out aren’t we?”

Back to Yarde and a victory on Saturday night will complete the Londoner’s rehabilitation. Arthur is very talented, has the confidence of an unbeaten fighter and possesses what might be the sharpest jab in British boxing. The clash of styles and personalities has everything.

“This weekend we’ve got another one. A guy who’s had a tremendous amateur background in Lyndon – had a lot of amateur fights and he’s 16-0 – fighting a guy who had 11 amateur fights but is a natural athlete and has took to boxing really well. It’s got all the hallmarks of a great fight again,” Warren said.

“I look at the mutual opponent they’ve had in Spelman and I thought Anthony did a much better job on him but we’ll see. If Yarde is what we think he is then he should be able to deal with it but Lyndon is no schmuck is he? He’s no slouch.

“I think we’re gonna see both guys at their best. They’ve both been training hard, they’ve both had a fight to get the rust out of their system and the stage is set for another great fight for the fans. We’re delivering for the fans again.”

Dubois vs Joyce: Zelfa Barrett, Jamie Moore & other insiders predict the winner
Lyndon Arthur exclusive: I enjoy being in the ring, putting in a class performance