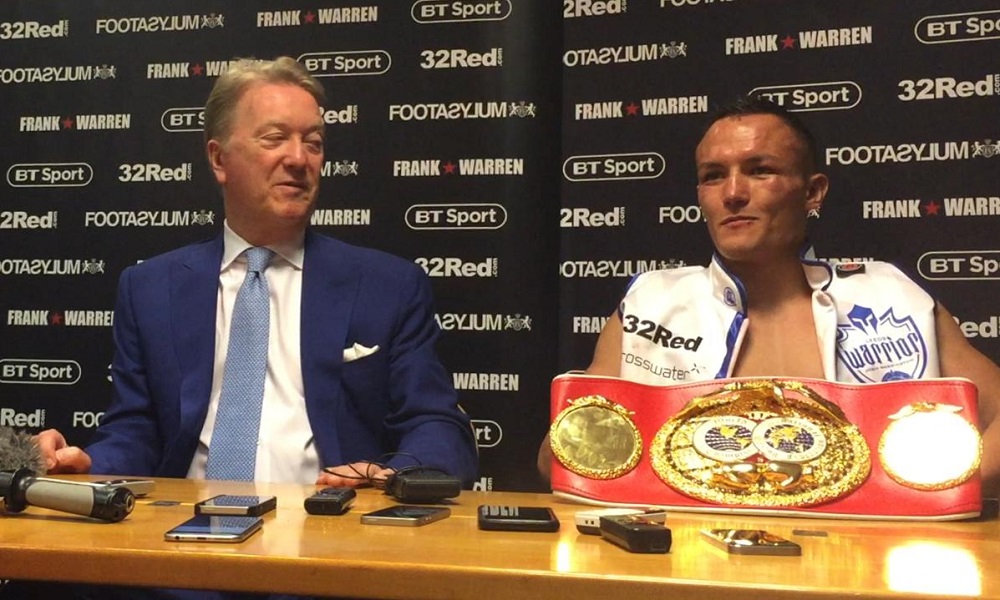 When IBF featherweight world champion Josh Warrington ground past Kid Galahad and fulfilled his mandatory obligation in June, the way seemed clear for an assault on the featherweight division’s other belt holders.

It quickly became apparent that the division’s top names were unwilling to engage with the unbeaten ‘Leeds Warrior,’ so although it is fair to say that Sofiane Takoucht’s name wasn’t high on the list of preferred opponents for this weekend, the Frenchman’s position as the IBF’s highest ranked available contender provided him with the perfect opportunity to capitalise on others reluctance. For all the latest fight odds, visit our sportsbook.

Saturday’s fight will be Warrington’s third defence of his title and his loyal army of fans will once again throw their weight behind their hometown hero and fill the First Direct Arena in Leeds. Although disappointed at being unable to nail down a unification fight show, promoter Frank Warren is happy that Warrington is staying busy rather than sitting and waiting for others to move.

“We delivered the world title opportunity for Josh. That was a hard process going through eliminators and the other things we decided to participate in to get him into the ideal position and now he’s fighting the highest available contender so I’m pleased about that,” Warren told 32Red.

“I’m not taking this fella for granted, don’t you worry about that. Look at Tyson Fury a few weeks ago. I knew Otto Wallin was going to show some balls but everybody took that for granted. When it came to the weigh in he wasn’t fazed at all. He knew it was a big moment and he was ready for it. I just hope that Josh won’t overlook it but he’s too experienced and professional for that.”

Should Warrington do the expected and get past Takoucht, pressure will mount from the fans and television – not to mention Warrington himself – for Warren to deliver a big fight for the summer of 2020. The promoter is just as keen as everybody else for the ‘The Leeds Warrior’ to have the opportunity to prove himself the best featherweight on the planet and has already offered one of the division’s biggest names the chance to take on Warrington only to be given a firm, ‘Thanks, but no thanks.’

“We’re gonna just carry on looking to make the big fights,” Warren said. “We have been working hard but for one reason and another we haven’t been able to get one. It will happen for him though. Leo Santa Cruz just did not want to know. I believe that that’s because of Josh’s fight with Carl Frampton. Carl did say that Josh was a better fighter than Santa Cruz after that fight and Carl has been in the ring twice with him. He just didn’t want to know and we offered him a lot of money to make that fight.”

Unless Santa Cruz undergoes a change of heart, Warren’s targets will need to shift. The featherweight division is changing and with Shakur Stevenson and Joet Gonzalez set to contest Oscar Valdez’s old WBO belt and Jhack Tepora and Michael Conlan making up ground, there will be a new group of fighters eager for a shot at a title.

The target for Warren and Warrington remains a unification, however, and the Leeds man might even make the trip across the Atlantic to drum up interest and attempt to smoke one of the other champions out.

“It’s a funny thing but they’re talking about Josh Warrington out in America. I sat down with Bob Arum while I was out in Vegas for Tyson’s fight and we spoke about a couple of his guys. They all know about him out there. Once he gets this one out of the way we might get Josh out there for a few of the other fellas fights to get his face seen about there even more. That might just shame them into it.”

Zelfa Barrett will provide the main support to Warrington. The two 32Red ambassadors are becoming a potent double act and after Barrett produced an eye catching performance to outpoint Lyon Woodstock on the undercard of Warrington’s decision victory over Kid Galahad in June, he gets another chance to impress the BT audience when he defends his Commonwealth title against Jordan McCorry. Should Barrett get past the Scotsman, he will have cleared another obstacle on the road to some massive showdowns with his domestic rivals Sam Bowen and Archie Sharp.

“This is where Zelfa’s at now. He has to be involved in the big fights from now on,” Warren said. “[His uncle and trainer] Pat has done a good job with him. We’ll provide the opportunities for Zelfa and it’s going to be up to him to show the world exactly what he’s got.

“I want all these guys to fight each other and I want to find out who the best in Britain is. It isn’t the end of the day for the losers either. If you lose, you lose and you can come back stronger from it. All the super featherweights we’ve got, I want them to fight each other. They’re all crowd pleasers and they will all be good fights for the fans.”