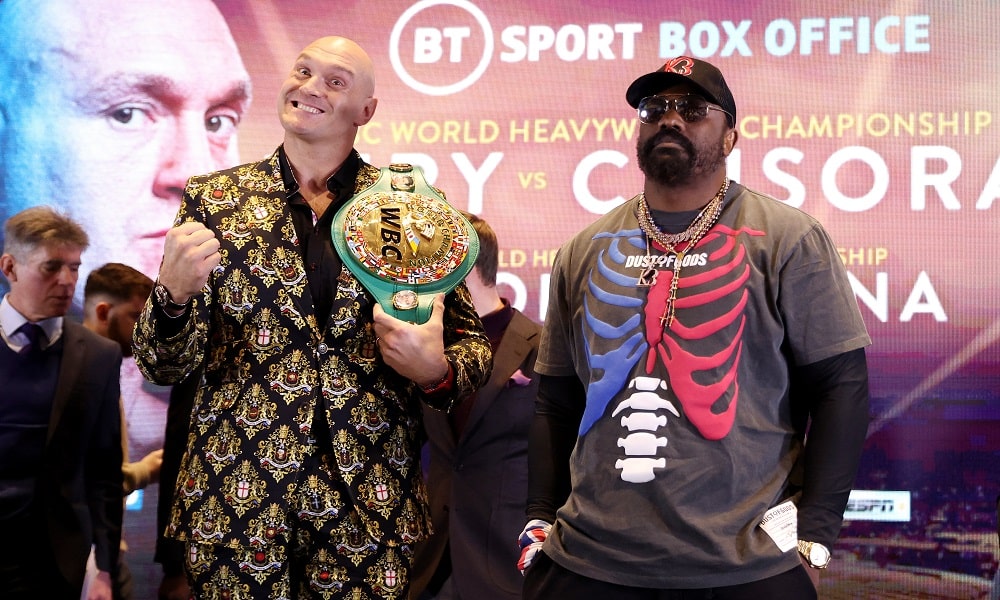 Fury vs Chisora: Boxing insiders’ predictions for the big fight

You will be hard pressed to find a single boxing fan who doesn’t expect Tyson Fury to have his way with Derek Chisora in their heavyweight title fight on Saturday night. For all the latest fight odds, visit our sportsbook.

‘The Gypsy King’ has already beaten Chisora twice and is a massive favourite to retain his WBC belt and march onwards to a massive unification showdown with Oleksandr Usyk early next year but we are always only one punch away from a monumental shock and the heavyweight division in particular is renowned for providing jaw dropping moments.

With two of the sports most combustible characters completing their trilogy in the centre of a football stadium on a cold December night, maybe the most predictable outcome is destined to be the least likely.

Will Fury do as expected and coast to a routine victory or will Chisora spring one of the biggest surprises in boxing history? Can Chisora provide some of his trademark mayhem? Will Fury decide to box and move or take the fight to his old rival? Will the crisp winter air have any bearing on either fighter’s performance or the big fight atmosphere?

32Red asked some boxing insiders how they feel Saturday evening will play out. 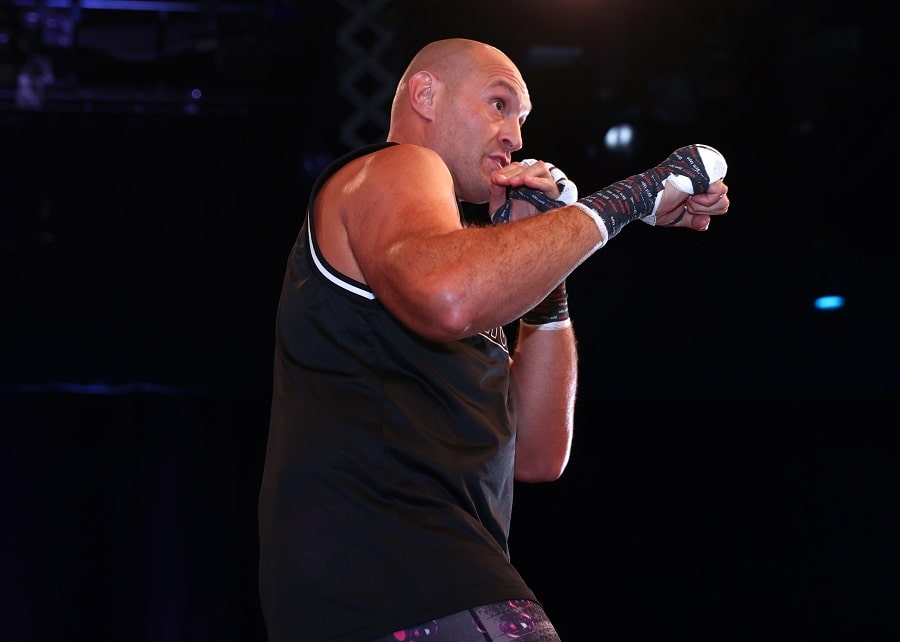 Fury – Chisora 3 on Saturday. How do I feel it’s going to go? Well, after looking at the first two fights it’s hard to see a different result but I do actually think that Chisora will have his moments during the first three rounds before Tyson takes over the fight, takes control and starts landing big shots. I think he’ll stop Derek in around six rounds.

It’s difficult to see anything other than a Tyson Fury win. I think most people are agreed on that. As for how it will come, I have a feeling that he’ll stop Derek Chisora on his feet. It could be a case of as we get to the later rounds, Tyson begins to really sink them in and the referee might come to Chisora’s aid. Derek will keep coming forward, we all know that. He’ll give it everything he’s got and I wouldn’t say that he’ll get knocked out by Fury but we might get to a point where we don’t need to see any more.

Spurs have a fantastic stadium. I was there for the Joshua against Usyk fight. All reports are that tickets have gone well and I hope that’s the case because it’s not going to be warm there on Saturday but it was amazing back in April at Wembley for his fight with Dillian Whyte so we’re hoping for more of the same.

My prediction for the Fury and Chisora fight is for a very explosive start from Chisora and for Fury to land big shots and take him out in about four rounds. I just believe that Fury is the greatest heavyweight of all time and that he’ll show that on Saturday. I expect a good fight for the fours rounds it’ll last with Chisora having a good go but Fury just being too much on the night. 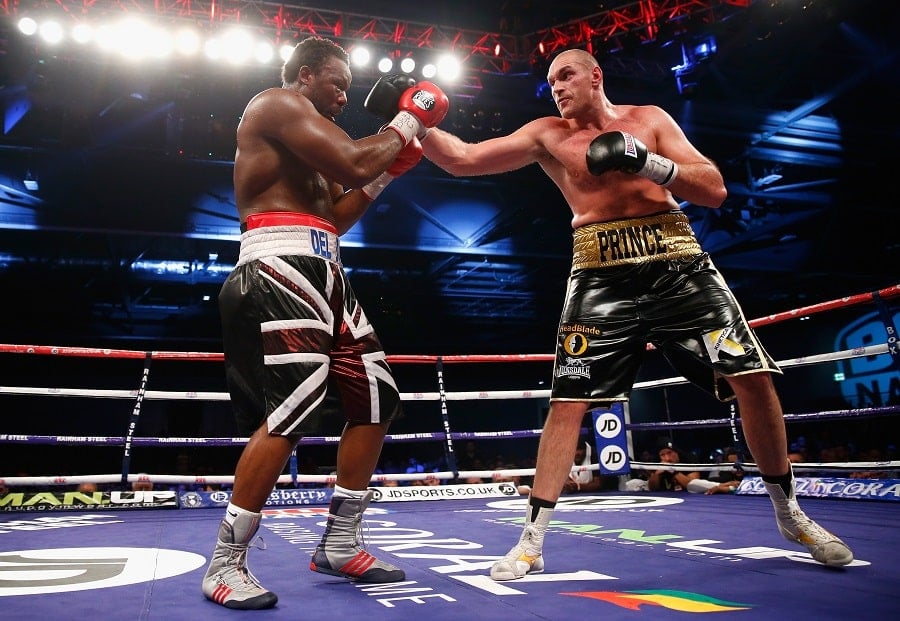 Fury versus Chisora. I’m expecting a show. I think Fury will play around for the first part. He’ll showboat, dance and do what he does and Chisora will bring what he always brings. There will be a few looping right hands but I don’t think any of them will hit the target. I think Tyson will take him out somewhere between six and eight.

I don’t think you need a prediction really. It’s gonna be Fury all day long. I mean, I wouldn’t say it’ll go beyond four rounds and if it does go beyond four it’s because Fury is gonna play with him and toy with him before he actually does it. 100% it’s gonna be a Fury knockout.

100% Fury is gonna win the fight. I think he’ll have a little look at Chisora early on with good movement and good head movement, nothing too hasty. He’ll do a bit of showmanship early on and play to the crowd a bit. Chisora will come and have a go like he always does but I just think that with Fury’s movement and ring generalship, he won’t land anything clean on him.

From the fifth onwards I think Fury will start upping the pace and force a stoppage. He’ll just be too much for him. I don’t think Chisora will quit or anything. I think the ref will wave it off eventually. Chisora’s style is there to be hit all night long isn’t it? High guard, not much head movement. He just comes marching forward. I think as Fury has done in loads of fights, he’ll let his flurries go and spin off. He’ll dance around him, go again and I just think Chisora will take too much punishment.

I see a total outboxing session by Tyson. A 120-108 unanimous decision. I see the fight literally going exactly like the previous two fights with Tyson totally outboxing him. Total domination. That’s all really. I think Tyson could stop him but they’re very friendly and things like that so I kind of see a mutual understanding. I don’t see a war. Tyson Fury to outbox him. 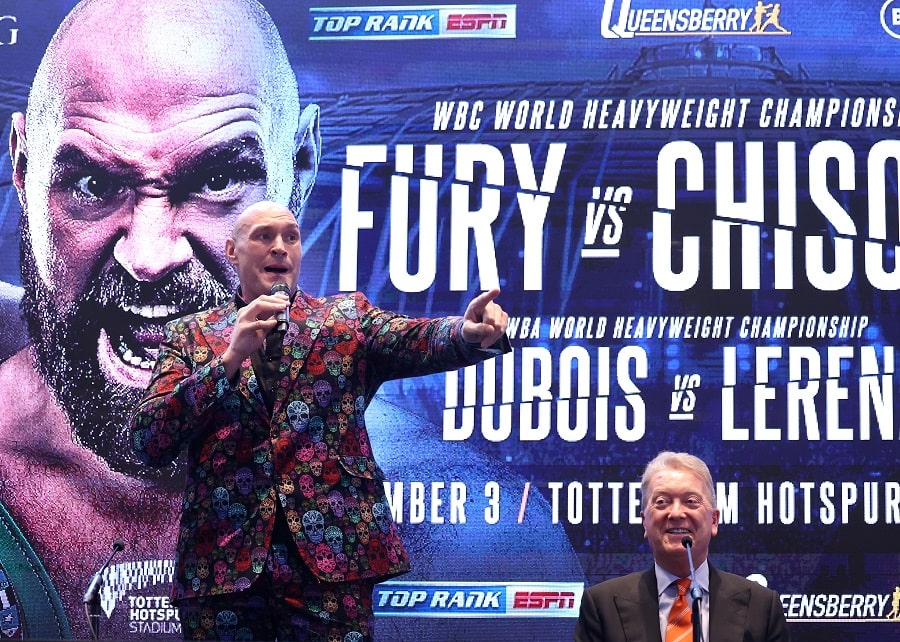 It’ll probably be a cold wet night at Spurs and it could be just that in the ring too. I don’t think anybody has bought into this fight and what can you expect? Well, you can expect the unexpected with Tyson. It could be a quick shootout and he goes for him like he’s saying or it could be a boring, long drawn out easy win. Either way, Fury wins.

Like most people, I think Fury wins in six rounds. In fact, if Fury’s on it I think he wins the fight any second, any minute he wants to be honest. He’s faced him twice before and Del Boy has posed very little threat at all. The one problem could come if his mindset’s slightly off because he knows how easy it could be but I don’t think he’ll allow that to happen given that the Usyk fight is there.

I think Derek will come out as he does. Staying low, throwing shots and hoping for the best. Almost going for broke from the start because he knows that he can’t outbox Fury.

As for the atmosphere, it could be one of those nights where it could be flat while the undercard is on. Not because they aren’t into it but because it’s cold. At Tottenham’s ground, there are a lot of places where you can stand in the concourses eating and drinking. Once the Fury fight begins and the ring entrances they’ll have I think it’ll generate a really good atmosphere. I guess Tyson’s gonna come out to his own song, Sweet Caroline. It can’t fail can it?

Continue Reading
You may also like...
Related Topics:featured, Fury vs Chisora