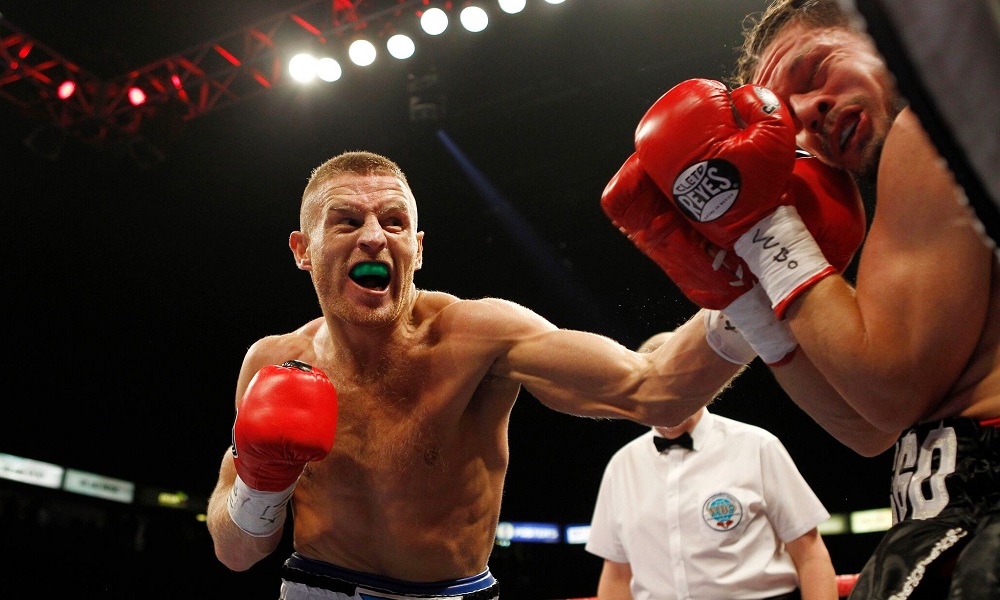 Terry Flanagan: “I’ve gotta be on it from the start.”

On Saturday night, Manchester’s Terry Flanagan (32-0, 13 KO’s) makes the fifth defence of his WBO lightweight world title (for the latest odds, see here) against the dangerous Russian Petr Petrov (38-4-2, 19 KO’s). Don’t expect Flanagan to engage in pointless trash talk as the fight draws near but rest assured, there is a monster waiting to burst out of the Mancunian. Don’t let Flanagan relax. You won’t like him when he relaxes.

Happiest amongst his own people and in his element when training, the tense Terry Flanagan that is forced to talk himself up in front of the cameras during fight week is a totally different individual to the laid back, self-deprecating figure you find in the gym. Those who see the real ‘Tez’ when he is relaxed and comfortable also yearn for the day that he loosens up on the big stage, places a little more trust in his natural ability and talent and shows exactly what he is capable of.

“Yeah, I think that’s right you know,” Flanagan told 32Red. “I box much better when I’m in a rhythm. Everything flows better when you can find your rhythm. I reckon that as soon as I settle down into this fight, that’s when you’ll see the best of me. I’ve done it all before and I know what to expect [from the whole build up] now though. I know there will be people going on about the fight but it’s really just about getting myself right. If I do that then I know it’ll be okay. This last week is all about concentrating and focusing and making sure I know exactly what I’ve gotta do on the night.”

The one time Flanagan was able to cut loose on the world stage and let his instincts take over, he found his rhythm and range instantly and decimated the aggressive – and favoured – Diego Magdaleno in two rounds. Flanagan comprehensively outboxed the ultra negative Mzonke Fana and Orlando Cruz but fought well within himself on both occasions, choosing substance over style. The thought of tangling with Magdaleno and Jose Zepeda kept Flanagan on a razor’s edge throughout training. Both provided potentially dangerous assignments but the 27 year old southpaw could prepare for each safe in the knowledge that his natural counterpunching style was his clearest route to victory.

Flanagan is from Ancoats, a tough but close community which lies in the shadows of the city centre’s ever changing modern skyline. For a low key, hard working fighter who shuns the bright lights that shine just half a mile from his front door, Flanagan’s actions have had to speak louder than his words. A conclusive victory against Petrov will be his loudest statement yet.

“Petrov is definitely going to throw punches back at me. He’s going to be right there and he’s coming to win, unlike Fana and Cruz who give me nothing back and decided that they were going to survive after a round or two. Petrov will be in the fight for as long as it lasts. It won’t matter if I’m ten rounds up, Petrov is still going to be in the fight trying to push me. He’s a very tough guy who throws a lot of shots and he can punch. I’ve gotta be on it from the start.

“Petrov isn’t the hardest to hit, though. If he starts getting desperate it might end up being a very difficult night for him.”

The Petrov fight will be Flanagan’s sixth world title fight within 20 months. The non stop nature of his career means that he hasn’t been able to sit back and reflect on what he has achieved and grow into the role of world champion. There has always been criticism of opponents to deal with for or questions about higher profile rivals to answer. Flanagan has been the lightweight division’s other guy so far. Should he beat Petrov, fighters like WBA champion Jorge Linares and WBC boss Mikey Garcia might just have to start answering questions about Manchester’s ‘Turbo’.

“You always get people criticising. That’s just how it is. I’ve never had chance to really enjoy being a world champion because I fight back to back. This is my fifth defence and I’ve only had the title for about a year and a half. Unlike a lot of fighters who win a title and then like to sit on it and go about enjoying being a world champion, I’m never happier than when I’m in the gym and fighting.

“I think I’ll sit back in a few years when I retire and look back at what I’ve achieved but at the moment, I just want bigger and better things. I don’t tend to think about who I am or what I’ve achieved. I just keep looking forward to the next thing.

“I need to get this fight won and then bigger fights are automatically gonna come. I’m not looking past Petrov though. That’s why I’m still unbeaten and 32-0. I never look past anybody. The fact is that although this is a tough fight, if I come through it fights with people like Mikey Garcia, Jorge Linares or even Vasyl Lomachenko if he decides to move up will be there. I’ve got options and I’m in a good position.”

Liam Williams: Smith is definitely underestimating me and what I can do
Boxing Preview: A New Era