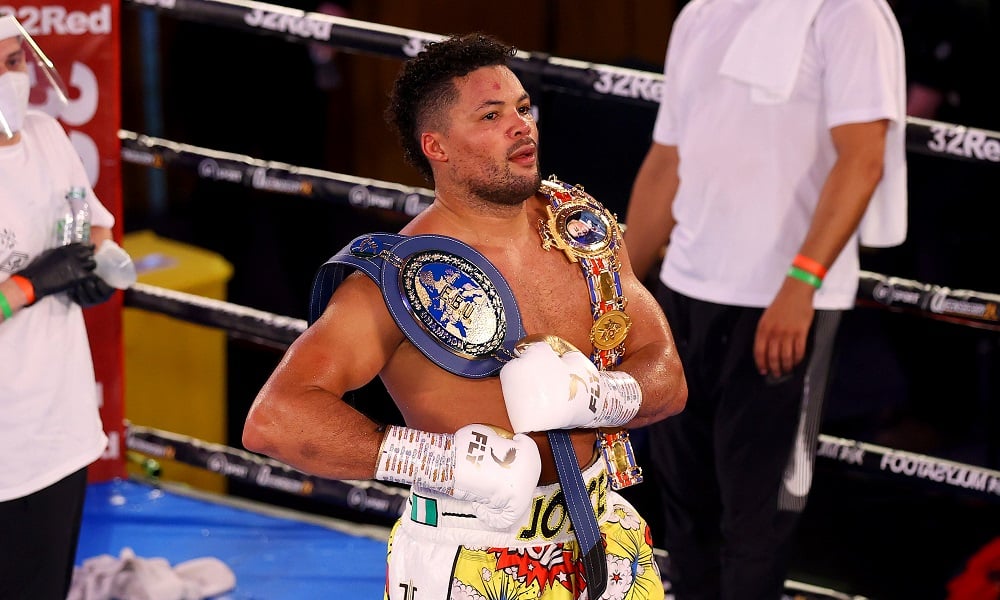 The experts weigh in – Joe Joyce

If you have been frustrated by the lack of action in the heavyweight division, put yourself in Joe Joyce’s shoes. Since producing a brilliant display to beat Daniel Dubois last November Joyce has been forced onto the sidelines, watching, waiting, and wondering if his opportunity will ever come.

Joyce has been officially named as the mandatory challenger for the WBO belt currently held by Anthony Joshua and the winner of the eagerly awaited clash between Joshua and Oleksandr Usyk will be ordered to defend their title against Joyce. Whether that actually happens remains to be seen.

Will the money generated by an undisputed clash between Joshua and the winner of the third fight between Tyson Fury and Deontay Wilder cause Joyce’s title tilt to be delayed further? Will Joyce end up fighting T.B.A for a vacant title? Will Usyk upset Joshua and dance straight into his mandated defence? Who knows.

Whatever happens, Joyce needs to keep busy. Never one to seek out an easy challenge, this weekend he comes up against the quality Carlos Takam. The Frenchman arrives in London knowing that a shock victory over Joyce will propel him right into the middle of the title muddle. Takam has built his reputation on giving the world’s top heavyweights plenty of problems and if Joyce isn’t on his game, it could turn into a tricky night. For all the latest fight odds, visit our sportsbook.

Andy Clarke will be commentating on this weekend’s fight for TalkSport, former pro Gary Logan is one of the sharpest analysts in the sport and Tom Gray is the Managing Editor of Ring magazine. What do they think of Joyce? 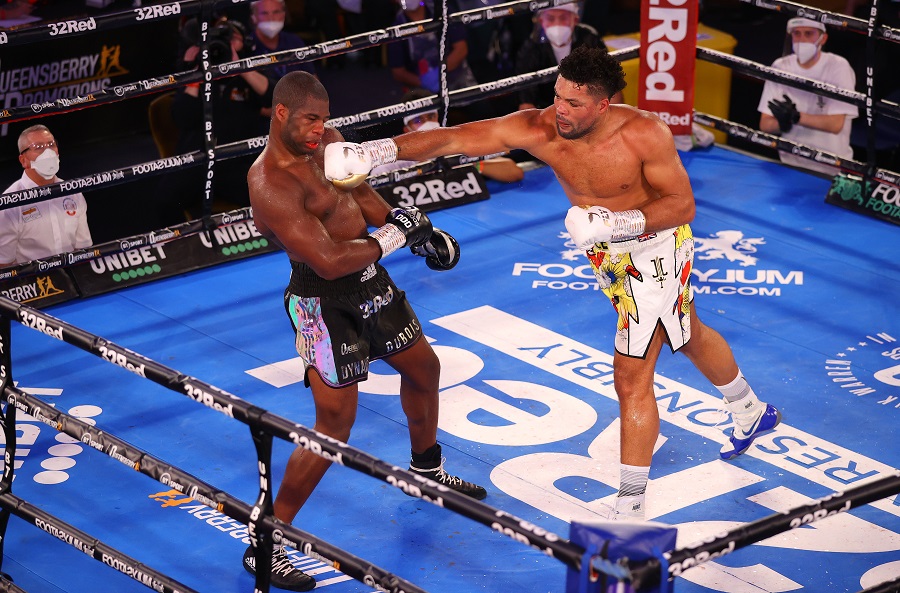 32Red: It is sometimes overshadowed by his relentless, grinding style of fighting but Joyce has Olympic pedigree. Still, has he surprised you with the smooth manner of his progress as a professional so far?

Tom Gray: I thought Joyce could have taken Olympic gold in Rio and had the same thoughts on him then as I do now. There’s nothing fancy or eye-popping in his arsenal, but he’s amazingly effective because of his size, timing, world-class jab and ring craft. Age was the only thing that worried me about him, but he has been moved perfectly and the really big fights are just around the corner.

Gary Logan: Yes, frankly, he has! Fighters like JJ teach us all that just because a style doesn’t suit your eye as fan or coach doesn’t mean that it’s not effective. He doesn’t hit the hardest (Wilder), punch in rapid staccato type combinations (AJ) box the smoothest or move lithely around the ring (Fury/Usyk) but DAMN he’s effective. Yep, he’s surprised me by putting it together and dismantling Dubois in such an efficient manner

Andy Clarke: Not really. People seem to forget about his amateur background. The perception of him as a pro has been the ‘Juggernaut’ thing. You know, ‘He’s relentless, he rolls forward and he’s got a granite chin’ but he is a really good boxer. You can’t not be a good boxer and win a World Championship bronze, an Olympic silver and a Commonwealth gold. He had a brilliant record in the WSB and you can’t do that unless you’ve got good technique and a high boxing I.Q.

32Red: How do you see his fight with Carlos Takam going this weekend? Does Takam have either the firepower or ring smarts to cause Joyce problems?

TG: Carlos Takam is a solid and experienced operator. Even the fights in which he’s fallen short – against the likes of Alexander Povetkin, Joseph Parker, Anthony Joshua and Derek Chisora – the veteran Frenchman has always acquitted himself very well. But at 40 years old, I think he’s out of time and I expect Joyce to beat him decisively.

GL: Adam Booth – when training Joe – told me, “If you can’t hurt Joe then you’d better be in super condition because he is relentless in his steady pressure… he just keeps coming!” Takam will try and box Joe long and to be successful doing that but I just don’t see how he sustains because I think Joe just won’t let him. Joe’s relentless when he thinks he’s stronger than you. Takam needs to pressure Joe but Joe is that big, that strong, he won’t let him. I think Joyce’s camp will be working on steady ‘break him down’ pressure.

AC: I do expect Joyce to beat him but I think Takam might have enough left to give him a good tussle. I think his defeat to Chisora was quite damaging though. I remember thinking after Joyce beat Stiverne in 2019 that Takam would be a great next fight for him because he is tough. People do like to compare results and he lasted into the 10th against Joshua but I would be very surprised if Joyce didn’t beat him. 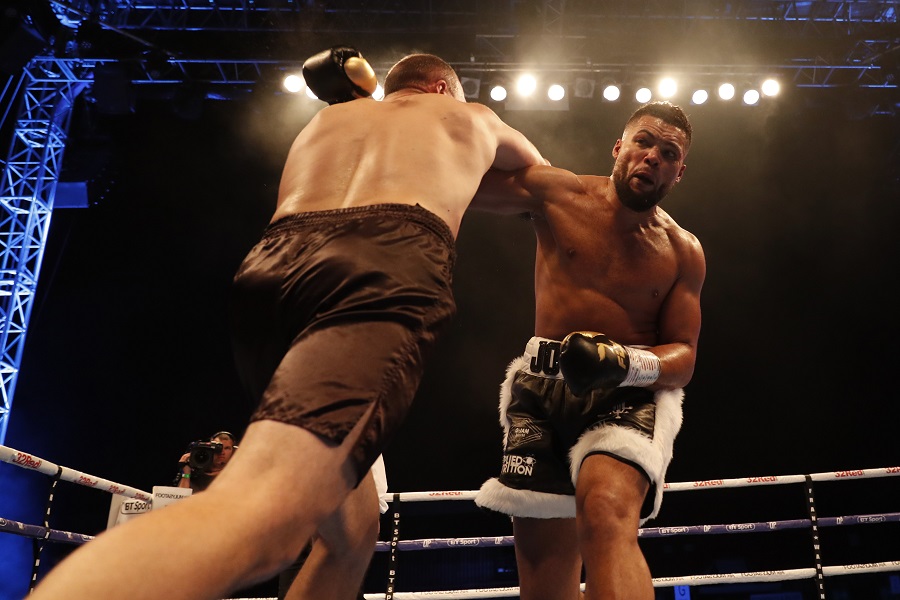 32Red: Should Joyce come through this weekend’s fight with Takam he is likely to fight for the WBO world title within the next year. If we look at the men in the heavyweight title picture (Fury, Joshua, Wilder and Usyk) who do you think Joyce fares best against and who gives him the most trouble?

TG: Stylistically, I believe that Joyce will give any heavyweight out there a run for their money. He lost to Joshua in the ABAs and has sparred 100s of rounds with him, so both of those guys know each other very well. Oleksandr Usyk beat Joyce in the WSB, but the “Juggernaut” has done a lot of improving since then. If you’re Deontay Wilder’s brain trust, you don’t go anywhere near a 260-pound heavyweight with Joyce’s boxing ability unless you have a very good reason. Tyson Fury is probably the only heavyweight I’d confidently pick to beat him, but I doubt that fight will ever be on the table.

GL: I’d have Joe having least technical trouble with Wilder obviously. Usyk presents both mobility and hand speed problems to a certain degree but I haven’t been wholly impressed with the heavyweight Usyk. The big two – Fury/AJ – are the problems! Fury’s mobility, hand speed and underrated punch power and AJ’s improved punch variation, power and speed are massive problems for Joe.

AC: He’s one of these people who will always be underestimated. I don’t think any of them would underestimate him to the level of thinking it will be easy but they would probably get in there on the night and find it harder than they expected it to be. I think Wilder’s cloak of invincibility has gone now and I’d fancy Joe for that reason. I’d quite fancy him against Usyk too, I know a lot of people won’t. I was watching Usyk against Chisora up close and Usyk had to work hard. His feet were really moving to stay away and Chisora isn’t the quickest. I think the one he has most problems with is probably Fury and I’ve always thought that Joshua is better than he’s given credit for.