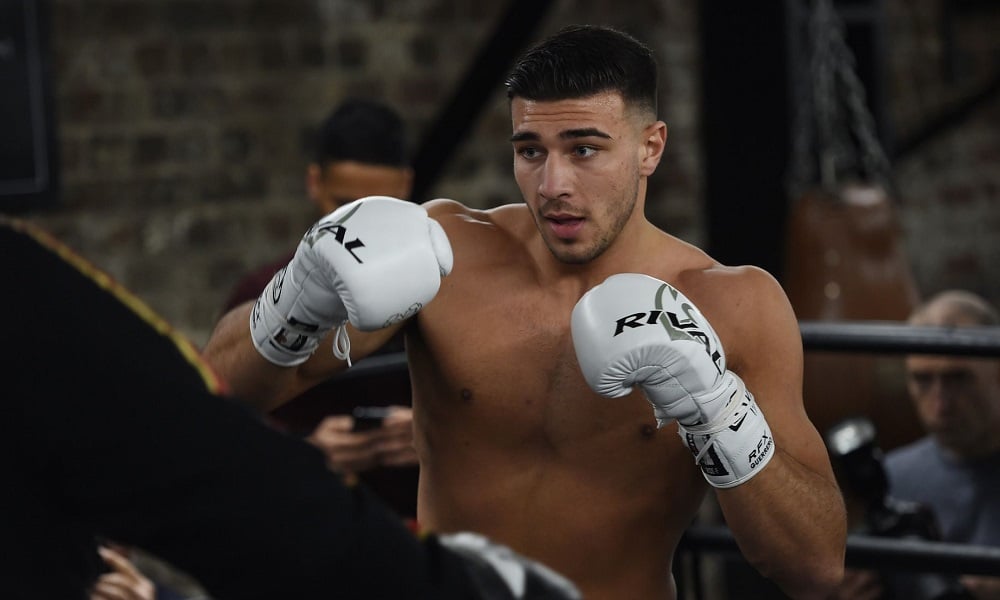 The clearest sign yet that Tommy Fury is still deadly serious about his boxing career came last week when a video of the 20 year old body sparring with his brother – lineal heavyweight champion Tyson Fury – appeared on social media. With steam rising from their bodies and their breath hanging in the air of the cold gym, the summer he spent lounging around a pool in the Love Island villa must have felt like a lifetime ago.

Fury (2-0, 1 KO) and his partner Molly-Mae eventually came second in the popular TV show but after spending months plastered over the pages of celebrity magazines, he will make his third professional appearance at the Copper Box Arena this weekend. Reality has hit home. For all the latest fight odds, visit our sportsbook.

“It’s very nice to be honest. It’s a lot better than answering questions about Love Island,” Fury laughed when talking to 32Red.

“It’s better now. I’ve got a routine and a structure to my life. This Love Island and reality TV stuff is all a bit weird. It’s all last minute and you’re all over the country. I’m just happy that I can be back in a routine without having too many distractions. I’m back to my old self.

“Love Island was a great stint in my life and it was a good choice to do it. I made my own name there but I never for one minute changed. I always knew in my own head that I was going to go back to boxing. This is what I do. It’s what I did before Love Island came along and it’s what I’ve done all of my life.”

The Fury family have had first hand experience of exactly what can happen when the temptations of life outside the gym become too much to resist. Lineal heavyweight champion, Tyson, won his own well publicised battle with drink, drugs, and depression after falling from the summit of the sport. More recently, Andy Ruiz surrendered his three heavyweight title belts to the taco shops and cantinas of Southern California and arrived in Saudi Arabia for last weekend’s mega fight with Anthony Joshua in no shape to compete.

It doesn’t matter what level you are competing at, boxing will find out those who don’t give their all to the sport. Fury has been pushed and pulled in all kinds of directions since his spell in Majorca and Ruiz’s capitulation provided him with a timely reminder of the importance of remaining focused.

“It just shows what can happen by not staying on the ball and missing training sessions because you think you’re better than you are,” he said. “Andy Ruiz won the world titles which was a massive achievement and great for him and his country but he took his eye off the ball. He was out partying and believing that he was this big time celebrity. He wasn’t. He needed to keep that same hunger and that’s where it went wrong for him.

“I understand there are a lot of distractions around me but you can ask anybody in my team, every single minute of the day I’ve had, I’ve trained. I’m in very good shape and I’m ready to go. There’s no messing around. I’ve been around boxing my entire life and I know exactly what it takes.”

Some distractions can actually benefit a fighter. Thinking about a job 24 hours a day, 7 days a week isn’t good for anybody, let alone somebody competing in the most demanding sport there is. The key – and skill – comes in finding a balance. Fury’s father, John, has taken over training responsibilities whilst his son looks to capitalise on the opportunities he has earned outside the ring; his job has been to maximise the time they have had available.

“It’s about finding a balance. A lot of people make boxing out to be more than it is. It’s a boxing match at the end of the day. You’re either going to win or you’re going to lose. No matter what happens the sun’s going to come up the next morning and you’re still going to have the same family around you. Anything you try too hard at always goes wrong anyway. You just have to try hard, do your best and that’s all you can ask for,” Fury reasoned.

“We’ve had a lot of things going on but my dad’s been there for me and he’s worked around my schedule. I’m thankful to him because I wouldn’t be in the shape I am now without my dad. Going forward, after Christmas we’re really going to nail it down. I’m in good shape now but we’ll have proper 12 week camps and get back into it.”

Fury has only fought professionally twice but his newfound fame will inevitably put pressure on him to deviate from the well trodden road prospects usually travel. A lot of the fans migrating to the sport from reality television initially won’t care whether he is fighting Anthony Yarde or Anthony Worral Thompson but boxing is a sport of short honeymoons and pretty quickly even the most ardent Love Island fan will want to see him in a test. His promoter, Frank Warren, told 32Red that he won’t be forced into rushing Fury and will instead keep him busy.

“It’s music to my ears. I’d love to fight every week or every month if I could. We’re fighters and practice makes perfect. The more times you get out, the better you get. That’s just how it is. If Frank can keep getting me out, that would be a dream come true.

“I’m not really interested in what other people think. I don’t really get drawn into the praise. At the end of the day the public have been very, very good to me and shown me plenty of support but I have to go in there and box to my own gameplan and what my trainer tells me too. I’m not going to go in there and be stupid. I want to box the best I can and put on a good show for everybody.

“I’m fighting for myself. I’m not fighting to be better than anybody or to emulate anybody. I just want to be the best that Tommy Fury can be. Whatever level that ends up being, I’ll be happy because I’ll know that I’ve tried my best and whatever happens was just meant to be.”

Daniel Dubois diary exclusive: I don’t want to lose. Ever
Liam Williams exclusive: I’m going to tear a hole in this fella