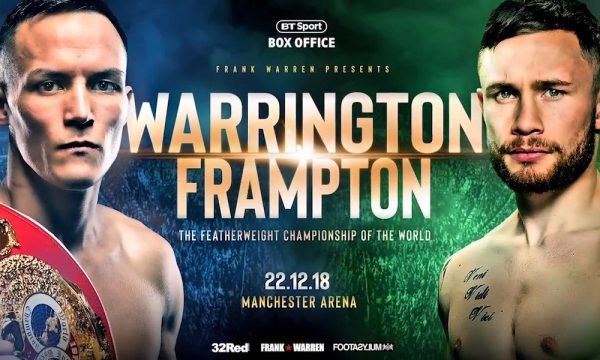 The fight will be Warrington’s first defence of the title he sensationally snatched away from Lee Selby in May and rather than seeking out a comfortable first defence, he has plunged straight back in to world class by electing to take on former two weight world champion, Frampton.

The clash of 32Red ambassadors has got the boxing world talking and after Belfast’s Frampton opened up as a sizeable favourite, the defending champion from Leeds has attracted plenty of support as the fight draws nearer.

Will Frampton’s punch picking prove too much for ‘The Leeds Warrior’? Will Warrington’s work rate and desire be too much for ‘The Jackal’ to contain? 32Red decided to ask six experts for their opinion on what promises to be British boxing’s fight of the year.

To be honest, I’m sitting on the fence. I’m finding it difficult to pick a winner. I’m sure most people are thinking the same way in that Frampton is a couple of levels above in terms of skill and natural ability but you can never write Warrington off. He has such a will to win and he’s so fit and determined. I don’t even want to sit on the fence but I can’t figure out a way to split them. I think potentially Carl wins the first half of the fight with cleaner shots but then Josh’s relentlessness will come into it in the second half. It’s going to be really close on points.

My prediction is very simple but firstly, both fighters are very good and they both have the heart for boxing. I’ve always been a fan of Carl Frampton and I believe that he will become a world champion again. I’m not taking anything away from Josh – I believe he’s a strong fighter too – I just think that Frampton has got the experience and the heart to take the IBF title with him. I wish both fighters a good fight and I believe Carl Frampton will win.

Warrington on points. You’ve got a guy who is on the up and is one of the most improved British boxers of the past couple of years. He’s got a team behind him that I massively rate. I think Steve Wood and the team behind Warrington has been one of the best in recent years. It probably suits Warrington it being in Manchester and I think everything is just in his favour. He just beat a guy who I rate more highly than Frampton. I think Lee Selby’s style would have been harder. He’s got some good advantages in speed and youth. The one thing I would say is that Carl seems to have the game changer.

The momentum lies with Warrington. Carl has got the skills but I’m going with the seemingly fresher fighter on the up.

I got the last prediction right about Josh when I said he’d beat Lee Selby. I don’t like going against Josh. He started his career off sparring with Terry Flanagan and they came up together and brought each other on. I’m going to go with Frampton on points though. I changed my mind based on Frampton’s last performance. People don’t think Luke Jackson was that good but I liked the way Frampton stuck to his boxing. His footwork seemed like it was back to where it was a few years ago. I thought he looked back to his best really. I think it’ll be a close-ish fight but I’m going to go with Frampton this time even though I want Josh to win.

I’m gonna go for a big win for Josh Warrington because Carl Frampton is good friends with Paddy Barnes! No, I do hope that Josh does it, he’s a good lad. That’s nothing personal against Carl because I’ve never met him but after Josh’s last performance you just can’t really go against him. Obviously Frampton has performed at a higher level for longer but his last few performances have been below the best that he’s shown in the past. Maybe he’s a bit over the hill. I think Warrington doesn’t stop coming so always poses a threat. It’s going to be a great fight regardless.

I’m gonna go with Frampton. It’s a mad one isn’t it though? Josh performed so well against Selby. Ok, I’m gonna stick with Frampton. He’s the more experienced. He’s been in these big, massive fights before and at the moment he’s in a brilliant stable. The atmosphere in the camp is going really well for him with all the other lads he has with him in the gym. No disrespect to Josh, he’s a tremendous fighter. I just think that Carl has been there and done it before and he’s going to do it again.

To see all our latest boxing markets, check out 32Red Sport here. If you’re up for a flutter on table games or the slots, be sure to check out our award-winning casino too!
Continue Reading
You may also like...
Related Topics:Carl Frampton, featured, Josh Warrington, Liam Williams, Ryan Walsh, Steve Maylett, Sunny Edwards, Zolani tete