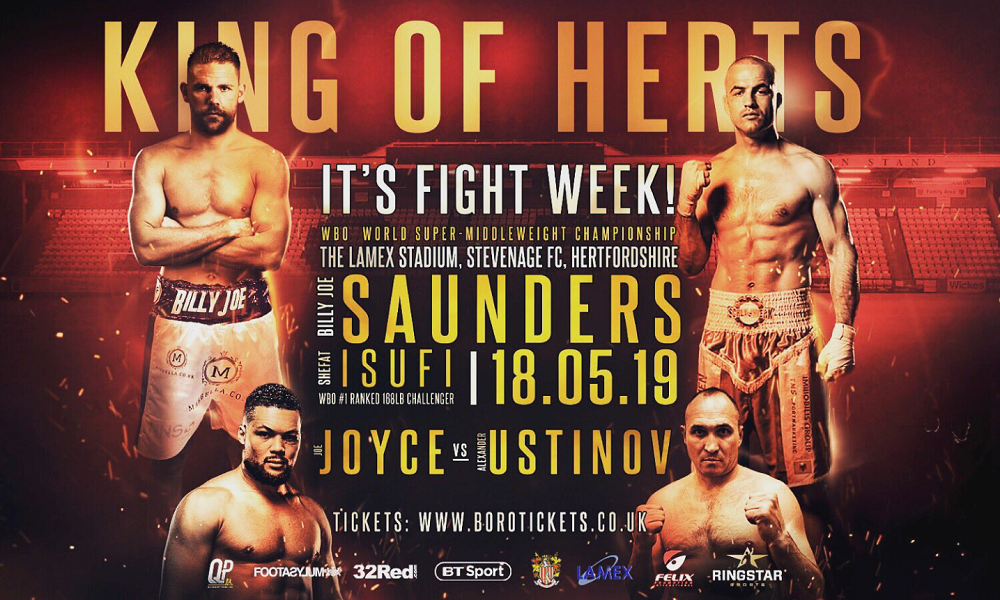 Billy Joe Saunders exclusive: I have to put a performance on

It is almost two and a half years since an unfit and desperate Billy Joe Saunders called upon an unknown trainer called Ben Davison to get him through an imminent world title fight against Artur Akavov.

Davison accepted the challenge and worked with what he had, to ensure that Saunders heard the words ‘and still’ after twelve grim rounds. The friends received a truck load of criticism for the performance and went their separate ways, written off as an undedicated champion and an inexperienced trainer. Times have changed. A rededicated Saunders went on to outclass David Lemieux and Davison performed wonders to help turn Tyson Fury’s life and career around.

Hindsight is a wonderful thing but the Akavov fight provided the first sign that Davison is a man to be trusted in a crisis. After being unable to capitalise on the Lemieux performance due to a string of outside the ring issues, Saunders has once again turned to Davison ahead of this weekend’s make or break world title clash with Shefat Isufi. For all the latest fight odds, visit our sportsbook.

“Ben gained a lot from that. I believe he’s still the youngest man to ever be in the corner of a world title fight. I think he learned a lot from that situation and a lot from dealing with Tyson Fury’s situation,” Saunders told 32Red. “He knows his boxing and he’s continuing to learn about the business and he’s good to work with. We’ve had a good working relationship for a few years now. After that bad performance I shopped around and was with Adam Booth and Dominic Ingle and now I’m back with Ben. I feel I owe it to him after that bad performance. It wasn’t down to him – it was mainly down to myself – but, nevertheless, we’re here now and we’ve got to get it right. There’s pressure on us both.”

Rather than picking up scraps and doing his best, this time Davison has had weeks to work with the unbeaten 29 year old. Given his rapid rise and Saunders’ undoubted ability, the pair go into this weekend’s vacant WBO super middleweight title fight as heavy favourites but just scraping by won’t be enough. There is an expectation that Saunders will get the job done in impressive fashion and remind people that he is still a force to be reckoned with.

“Ben’s always been the same character you see now. He’s always been like that, there’s been no change [since his Fury success]. He’s obviously doing a great job and you’ve got to respect that. He’s a fantastic trainer,” Saunders said. “I’ve been in Manchester for eight weeks. I’ve really been putting the effort in and it’s starting to pay off. I’m starting to feel good. I’m sharp and fit and ready to do the business. Things are all in hand and I’m feeling fit and fresh. That’s the most important thing for me. I really can’t wait to get the show back on the road.

“I believe that I am one of Britain’s most skilled fighters and I’m going to show that. It’s all about getting the timing and tactics right and going in there enjoying myself and putting myself back on the map. After that, I can ask where these big fights are. There’s no point scraping past him. I have to put a performance on. I know that.”

The announcement of Isufi as Saunders’ opponent sent boxing fans scurrying to BoxRec to learn more about the Serbian, who is unbeaten in ten fights and initially competed as a cruiserweight. Isufi can’t match Saunders for ability but is heavy handed and will know that this is likely to be his only shot at a world title. Sometimes in situations like this, the unknown can cause either fear or complacency but Saunders knows enough about his rival to ensure that he is going into the fight armed with all the knowledge he needs.

“He’s one of these fighters who people won’t give credit to because they haven’t seen him in a big ‘Saunders v Eubank’ or ‘Froch v Groves’ type of fight but I’ve seen a few bits of bobs of him and I know a few of his sparring partners,” said Saunders. “He first rang a bell about 18 months ago. He’s lost three but he’s knocked out 20. He’s a very good, very stern puncher and this game is full of surprises. You’ve got to give everybody credibility and take everybody’s attributes seriously. One mistake and it could be a horrible night.

“He’s come down from cruiserweight. Let’s say he’s coming down from 13st 10lbs or 14st now, I know he’s going to be strong on the night but boiling down to super middleweight is a lot for a man like that to do. I know that he’s strong but I’ve seen strong men before. Strength doesn’t beat skill and will and determination.”

Fighters like Roy Jones Jnr and James Toney have enjoyed success at middleweight before stepping up to the 168lb division and utilising their speed, skill and reflexes to achieve even more success. Saunders won’t be the biggest super middleweight in the world but he may just be the most naturally gifted. After years spent searching for a major fight at middleweight, he is about to open an exciting new chapter to his career.

“Middleweight’s a slog for me. People say, ‘Oh he can make it easy’ well, that’s a load of rubbish. When I get down to 11st 6lbs, that brilliant best of me just goes. But this is my first fight at 168lbs so who knows? I have to make sure I feel good and energised and that I make it work for me. My promoter has done his job. My management have done their job. Ben is continuing to do his job and now I have to do mine.”