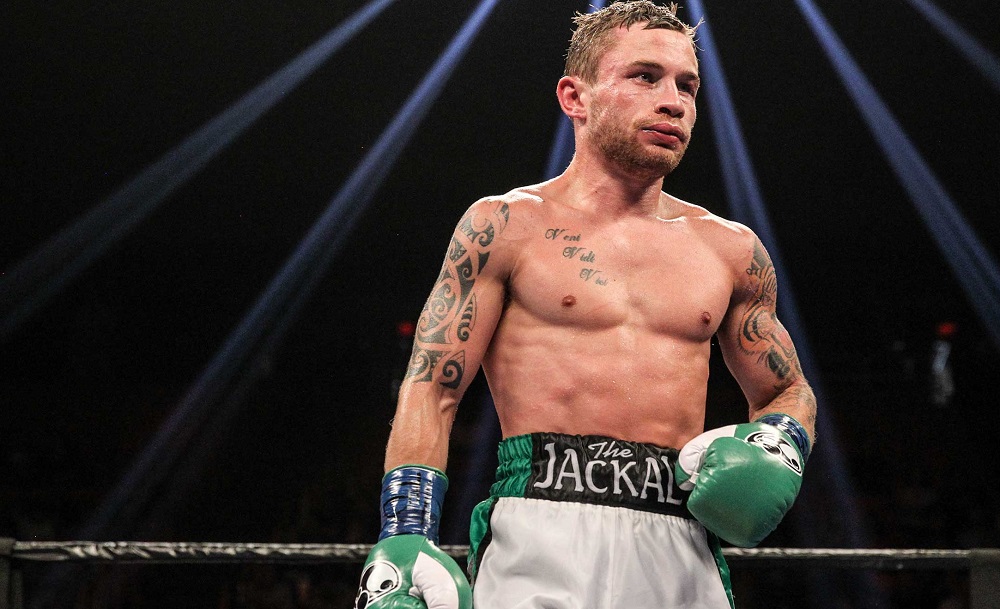 Carl Frampton v Santa Cruz: Will the Jackal finish the job in style?

Defeating domestic rival Scott Quigg on PPV to unify titles at bantamweight, becoming the first Northern Irish fighter to win a world title at two weights and now headlining a card at the MGM Grand in Las Vegas… it’s been a pretty good year for Belfast’s Carl Frampton! This weekend, ‘The Jackal’ aims to continue his impressive run when he meets Leo Santa Cruz for a second time in six months on a cracker of a card. The early hours of Sunday morning also hold plenty more British interest as IBF Featherweight belt holder Lee Selby and rising star Josh Taylor are also in action.

Frampton v Santa Cruz will hopefully pick up where they left off in July of last year, where Frampton picked up a narrow, but deserved points victory over Mexico’s Santa Cruz in what many had down as their fight of the year. On that night at the Brooklyn Centre in New York, Santa Cruz threw over 1000 punches and still couldn’t manage to persuade the judges that he deserved the decision, so it would be tough to argue a case where the challenger can simply ‘do a bit more’ and expect a positive outcome. For that reason, the 13/10 on offer for Frampton to win on points after 12 rounds would seem the safe, smart pick in the main event.

Despite being the smaller man with a seven-inch reach disadvantage, Frampton regularly managed to win the battle of the jabs in their first meeting and was also happy to meet Santa Cruz head on and land the more telling blows in up-close exchanges, most notably when almost having his opponent out in the second round.

The over-riding feeling on watching their first bout is that while the pair are well matched, Frampton just does everything marginally better. (Frampton landed 36% of his punches to Santa Cruz’s 25%) With the added confidence that the victory in their first bout will bring, the Northern Irishman to win by stoppage in rounds 7-12 at 13/2 could be interesting value for many.

In the chief supporting bout, Mikey Garcia takes on high risk, low reward, Dejan Zlaticanin for the WBC World Lightweight title. Garcia was once one of the hottest properties in world boxing before promotional disputes led to a 2-year ring absence. The American is undefeated, with 29 KO’s from 35 wins and had this bout taken place in 2014 you’d have had to search far and wide to find him available at anywhere close to 2/5 for the win.

The intrigue in 2017, however, comes from the fact that Garcia has only fought once since January 2014 and in that period, Zlaticanin has remained active and taken notable scalps in Ricky Burns and Ivan Redkach. If there’s any ring rust in Garcia, the come forward style of his Montenegrin opponent will make it a very tough night’s work. Zlaticanin is priced at 8/1 to catch up with Garcia between rounds 7-12 and while it wouldn’t be classed as a major shock if that transpired, the class of Garcia should tell after a couple of competitive early rounds and 13/10 for the favourite to win by stoppage looks a fair price.

Also on the packed card is the self-proclaimed ‘Welsh Mayweather’, Lee Selby, who defends his IBF Featherweight crown vs. Jonathan Victor Barros. Selby is being lined up as a future opponent for the Santa Cruz v Frampton winner, but since relocating to America to chase big money fights, the talented 29-year-old hasn’t exactly set the world on fire.

With Selby at 1/25, it won’t take a genius to work out which way this fight is anticipated to go, but given his struggles against a career flyweight in Montiel and getting dropped by the mediocre Eric Hunter in his last two outings, the 10/1 available on the Argentinean is tempting. Barros may have faced no-one of note in recent fights, but does hold a victory over Celestino Cabellero and went the distance with Yuriorkis Gamboa (then at his power-punching peak) so is likely to be more competitive than the price suggests.

Up-and-coming Scot, Josh Taylor is also in action and while his opponent is very much cherry-picked to showcase the novice to an American audience, he’s well worth a watch even if you don’t have a vested interest in the result. Taylor may not be at world level yet, but from what has been shown so far, particularly in dispatching of the tough Dave Ryan in only his seventh fight, he’s possibly the most exciting young British prospect in action today and will no doubt have his headline moments in the not too distant future.

For all the odds on this weekend’s fights, visit 32Red.com/sport. If you’re looking to have a different kind of flutter, be sure to check 32Red Casino for a fantastic range of slots and table games.

Continue Reading
You may also like...
Related Topics:Carl Frampton