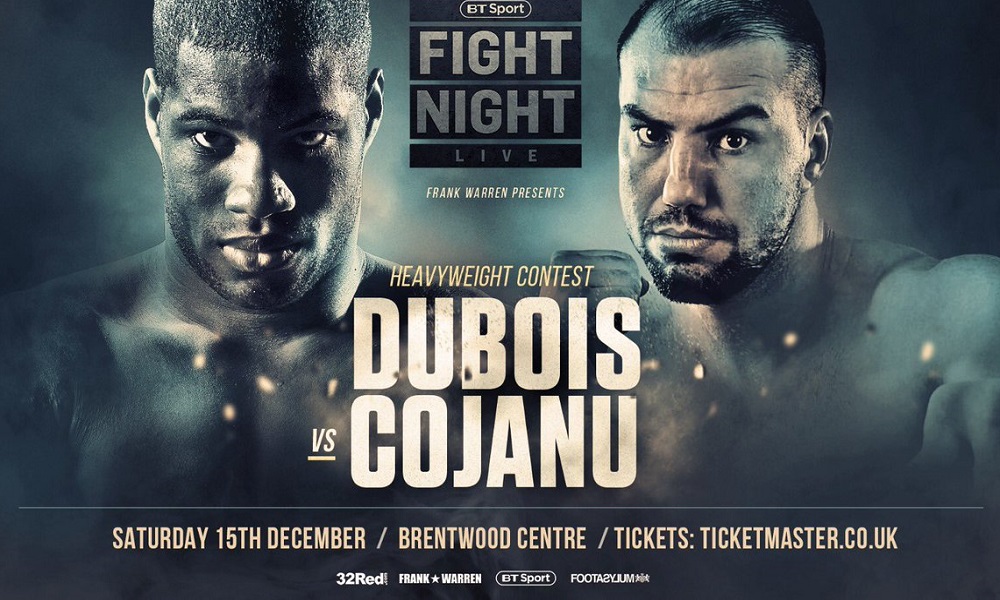 The heavyweight division has suddenly re-emerged as boxing’s land of milk and honey.

Should Daniel Dubois (9-0, 8 KO’s) fulfil the potential he undoubtedly possesses, he too will eventually walk amongst the sports giants but at the moment, fame, money and glamour are dreams for another day and plaudits are nothing more than background noise. The Londoner’s preferred soundtrack is the hustle and bustle of a busy gym.

“I’m just getting warmed up for what should be my final sparring session,” 32Red ambassador Dubois said before his fight with Razvan Cojanu in Brentwood this weekend. Find all the latest boxing odds here.

“Everything is going well. I’m settling down into the life of a professional fighter a bit now and I’m getting used to everything. The sport puts a lot of demands on you but I know there’s a big reward waiting at the end of the day so I have to keep plugging away.”

Dubois’ last outing couldn’t have been further removed from the type of thrill-a-minute, tension-filled battles which have made heavyweight boxing big news again. In October, world class survivor Kevin Johnson put up the barriers and walked Dubois through ten rounds for the first time in his career. Until that point, 21-year-old Dubois had always been able to find the punches to bring matters to an early conclusion but the time spent with former world title challenger Johnson proved much more useful than another short but sweet blowout.

“It was a really good experience for me and my whole career. It doesn’t really matter what people say. People will always talk and talk, that’s what people do so I don’t pay too much attention to it all. I just stay focused on myself,” Dubois said.

“All of the great fighters of the past have to go the distance at some stage so It was an experience that I knew I would have to go through eventually and it’ll definitely benefit me well as I go forward through my career. My work rate was good and I was fit and I was healthy. I got those ten rounds in and I know exactly what it feels like to go through that now. I’m going to be better prepared for it next time and I’ll be able to step things up in the later rounds even more than I did against Johnson.

“Johnson talks a lot but at the end of the day he was just another fighter. He had his game plan and he wanted to survive right the way to the end. He was very determined to accomplish that. That’s all it was really.”

On Saturday, Dubois will take part in just his tenth fight but he has already vacuumed up the Southern Area and English titles and Cojanu will be the second world title challenger he has faced. It has been steady, sensible progress and taking on Cojanu is the ideal way to end his first full year as a professional.

“I think it’s the perfect fight for him, I really do,” Dubois’ trainer Martin Bowers said. “I’m glad we’ve got such a good opponent. If I put my hand on my heart it’s probably one fight too early – I think the Johnson fight was probably two fights too early – but if you can’t get an opponent, you can’t get anybody to fight you, you have to move on. Dan’s ready. He’s nice and well.

“The fella is the next level up to anybody Daniel has faced and he’s going to have to do a bit of learning on the job. Dan will have some puzzles to solve. I’ve watched quite a bit of him and he’s going to do some things that Dan hasn’t had done to him before. He’s going to grab him, lean on him and try to make him miss and look awkward. He’s going to bring so much to the table and I just hope people appreciate it. Sometimes people just want to see a knockout but that’s not going to improve Daniel and bring him along is it?”

Cojanu arrives in Brentwood with a 16-4 record and took Joseph Parker the distance in a late notice WBO world title tilt back in May 2017. The exceptional Luis Ortiz disposed of him in just two rounds this past July but having competed at world level for the past 18 months, whichever version of Cojanu that Dubois faces, he’s certain to provide a much more ambitious test than Johnson.

“If he comes to the ring with that attitude it would be absolutely great. It’ll definitely be a more exciting fight than my last one with Johnson and I’ll definitely take him out,” Dubois said. “I’ve prepared for it to go the full distance but whether it goes the full ten rounds or not I’m just ready to fight now.

“I let Martin worry about my opponents and what not. I’ve trained very hard and if he has, we’re going to be in for a very good fight.

And with that, Dubois is gone. That potential won’t fulfil itself.

Sunny Edwards: I calculate the risks and then turn the screw
Warrington vs Frampton volley challenge: Sneak peek