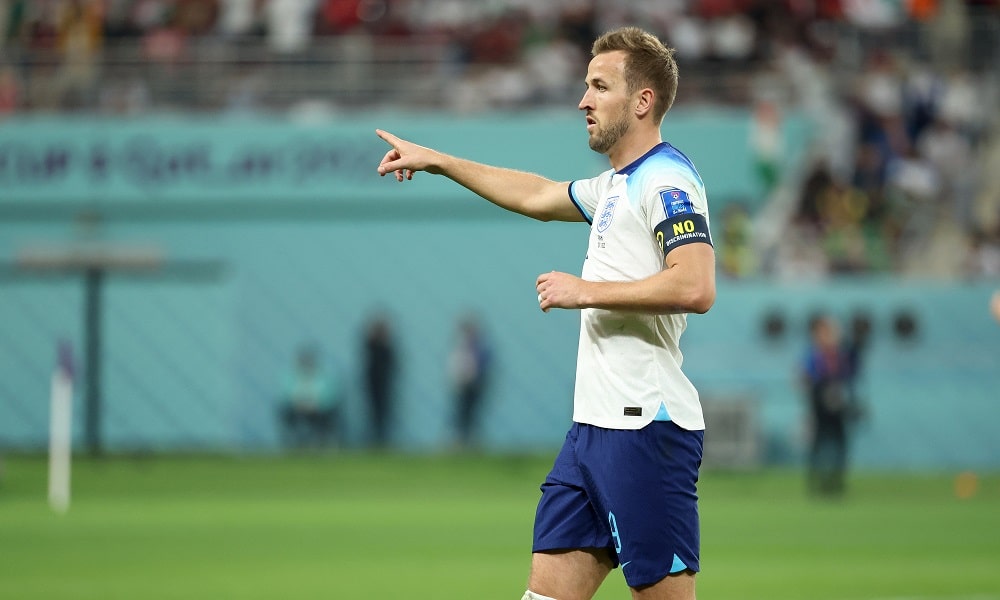 England vs USA: Kane to get off the mark

For Kane, thankfully there’s no need to refrain; according to Gareth Southgate, the England captain is fit to play against the USA.

Following concern around Harry Kane’s ankle in the run-up to Friday’s game, manager Southgate says Kane is “all good” for the encounter at the Al Bayt stadium.

Can England maintain the momentum against the USA?

He’s so often the man the Three Lions turn to in finding the net. But on Monday Kane couldn’t get on the scoresheet, despite a 6-2 demolition job on an outclassed Iran. Not that the Spurs striker should feel left out – Harry did contribute a couple of assists, after all.

Still, after winning the Golden Boot in Russia four years ago, it seems likely H will be hopeful that he can have another high scoring tournament in Qatar.

Earlier this week, England won in emphatic style in their opening game – so can they maintain that momentum as they face off against a decent USA side?

Gareth Southgate’s side weren’t necessarily expected to excel this week, given their performances back in the summer. The Three Lions suffered relegation in the Nations League following a six-match winless sequence – including a 4-0 defeat to Hungary at Wembley.

But confidence must be high in the England camp after starting this tournament in such rambunctious style.

The USA are unbeaten against England in the World Cup

Greg Berhalter’s USA team got their side under way in more muted fashion. The Yanks saw Timothy Weah (son of Ballon d’Or winner George) score a first half goal to take the lead against Wales – before Gareth Bale equalised for the Dragons from the penalty spot in the second half.

Last time these sides met at a World Cup, 12 years ago, the game ended in a 1-1 draw, Clint Dempsey levelling for the US after Steven Gerrard had scored in the fourth minute.

And in fact, in the USA’s only other World Cup meeting with England, it made for an upset that remains notable 70 years later, the Americans beating merry old England 1-0.

It’s not like the US really qualify as a bogey team, however; in the nine times the sides have met in friendlies, England have won eight of them, most recently in November 2018 when the score line was 3-0 in England’s favour. The side were slight favourites to beat the Welsh in their opener; that they were unable to do so should lend further confidence to a Southgate side seemingly brimming with assurance already.

With this current USA team, Berhalter has opted for younger players over experienced heads; the squad has an average age of 25. Still, 24-year-old Christian Pulisic at least brings some worldliness.

The Chelsea man is an undoubted talent – but just one goal for the Blues this season suggests Captain America’s goalscoring ability has entered a state of suspended animation.

That said, he was decent against Wales on Monday, setting up Weah for the goal, running from the halfway line before providing the through ball.

Brass tacks – if England can play with the fluidity and control they showed earlier this week, another (fairly straightforward?) win would seem probable.

Kane is 13/10 to score at any time on Friday; the England captain has a total of 51 goals for England, just two short of all-time England scorer Wayne Rooney. Combine England to win and Kane to score in a double at 15/8.

Continue Reading
You may also like...
Related Topics:England vs USA, featured