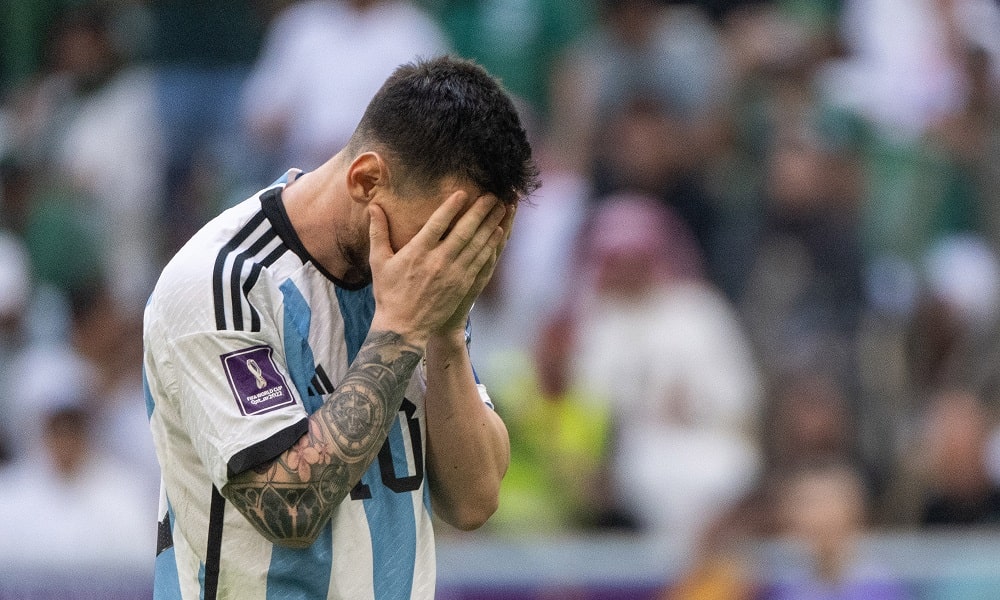 This World Cup might have its faults, but there’s no denying there’s been some enjoyable football. Even if Argentina’s support would vehemently disagree.

On Tuesday, the nation of Maradona and Messi were undone by a nation better known for its oil, than an ability to induce olés. At the Lusail Stadium, Argentina’s 36-match unbeaten run came to an end in almost incomprehensible style.

The Saudis were available at 90/1 in-play

Yup, a Saudi Arabian side with a very modest reputation beat the second favourites for this tournament 2-1. It was an incredible display from the uber-underdogs, inspired goals combining with similarly excellent defensive work.

In terms of sporting David vs Goliath stories, it’s up there with North Korea besting Italy, or Rocky Balboa battling Thunderlips to a standstill. After Argentina had taken a 1-0 lead through Lionel Messi’s 10th minute penalty, the Saudis were available to back at 90/1 in-play. And it’s fair to say that on paper, those odds looked reasonable.

After all, the Saudi’s games in the run-up to this one included a goalless draw with Honduras, and a 1-1 draw with Panama. Hardly the stuff that would mark this team out with the potential to cause an upset.

Yet while Argentina dominated the play, the Saudis made their opportunities count. Minutes into the second half, Saleh Al Shehri rifled home a fine finish into the corner to level the scores; five minutes later, Salem Al Dawsari would produce an even more outstanding goal to give his side the lead.

Controlling the ball with a fine touch following a defensive block, Al Dawsari darted left then right to elude the chasing defenders, creating the space to unleash a shot that Emi Martinez’s fingertip save couldn’t prevent from finding the net.

For Saudi Arabia, the result was enough to convince the kingdom to make Wednesday an impromptu bank holiday in celebration of this footballing triumph.

England have now overtaken Argentina in the betting

For Argentina, it will be a day of recrimination. Messi has admitted this is probably his last World Cup; surely, the legendary forward won’t allow this defeat to define what could be his final tournament on the international stage.

Earlier this week, coach Lionel Scaloni had observed phlegmatically that the best teams don’t always win. Perhaps he can take some comfort from the fact that his side’s play was not as awful as the result.

There’s hope, too, in the example of the 1990 World Cup, where an Argentina side featuring Maradona were beaten by Cameroon in the opening round – then going on to reach the final.

Nonetheless, this desperately disappointing start to the tournament has seen the Argentines overtaken by England in the betting; the current favourites for glory are Brazil at 3/1, France at 13/2, England at 15/2, and Argentina at 17/2.

Saudi Arabia’s hopes of building on the moment admittedly seem slim; the side are currently rated as 275/1 shots for glory. But whatever happens next, Tuesday’s shock result is undoubtedly a brilliant World Cup moment that will be remembered.

After impressive opener, are England a good shout for Qatar glory?
England vs USA: Kane to get off the mark