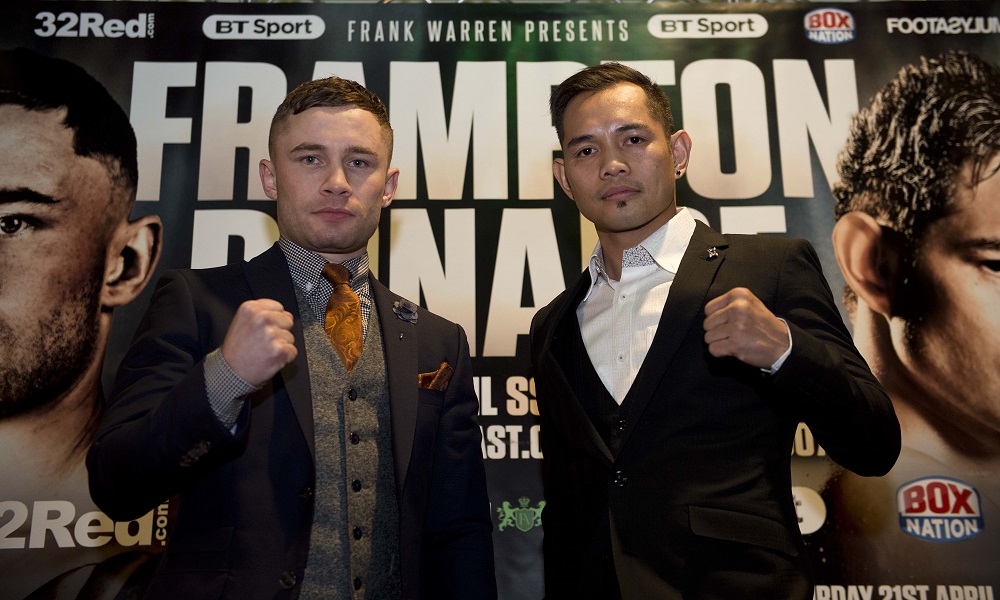 In the short space of time since arriving in Belfast, Nonito Donaire has won over a fair few of the local fight fans and enjoyed an unusually warm welcome for an away fighter on British soil. A song and a dance for the open workout crowd, an impromptu boxing lesson for local kids and plenty of respectful comments towards his local hero opponent, showed that the former four-weight title holder and future hall of fame fighter didn’t stop behaving like a champion once his belts had gone.

That hospitality will end around 10pm on Saturday night at the SSE Arena when Carl Frampton heads to the ring and looks to take one step closer to his dream. Find the latest odds for Saturday’s fight here. The prize for a successful night for Frampton is an August date at Windsor Park, where promoter Frank Warren has promised to deliver another big-name challenger and the opportunity to become a World Champion for the third time in the Belfast fighter’s career.

The odds suggest that the local lad should get the job done – Frampton is currently 1/7 to win on Saturday with Nonito Donaire 9/2 and the draw 25/1 – and The Jackal’s rhetoric in the build-up back those prices up. When speaking to 32Red earlier this week, Frampton was quick to highlight his new-found love for training brought about from only his second camp with new trainer Jamie Moore and the tight-knit team he’s brought together at the VIP gym in Astley.

Competition every day from fellow Irish fighters Steven Ward and Conrad Cummings as well as established British fight names like Martin Murray, Tommy Coyle, Rocky Fielding and Jack Catterall genuinely appear to be bringing out the best in Frampton, whilst making ‘going to work’ a pleasure.

Frampton has said that the 35-year-old Donaire is the best opponent he’s ever faced and if that statement is based on what the Filipino-American has achieved in his career, then it’s probably fair. Donaire first won a title back in 2007 and has picked them up at four different weights since, amassing a record of 38 wins and only 4 losses.

The current reality, however, is that most of the best work he has done came at least 6 years ago and at lower weights than the Featherweight limit they’ll meet at this weekend. As great a performer as Donaire once was, losses to the enigmatic Rigondeaux, the comparatively huge Nicholas Walters and the younger, fresher Jessie Magdaleno have all come since he was blitzing Jorge Arce and Fernando Montiel.

What you can’t deny is Donaire’s power – just check out his KO of Julio Arce! Anyone who takes him on without showing respect for the left-hook will likely regret that decision and this is something which won’t have gone unnoticed in Frampton’s camp. (Donaire by KO/TKO/DQ is 7/1) Couple that with Frampton’s natural tendency to ease himself into proceedings and I can see a fairly cagey opening few rounds.

He may have got off to a fast start against Garcia in his previous outing and raced to an early lead against Scott Quigg, but looking over a longer period of his career, even when faced with opponents he was clearly a level above like Parodi, Avalos, Martinez and Molitor he left it until the mid-to-late rounds before putting his foot down.

As Frampton is without a stoppage win since moving up to Featheweight, the most likely outcome would have to be a points win at 13/25 – but it’s fair to say that’s priced accordingly. Where I see some value however is Frampton getting the stoppage in the second half of the fight.

The potential upside for winning is greater for the Belfast man at this stage in his career than Donaire and with the home support behind him, he should be able to force a late stoppage and send the fans home happy. Frampton to win between rounds 7-12 is available at 11/2 and that’s where my money will be.

For anyone looking for a longer odds play on the night’s action I wouldn’t put anyone off this 43/1 treble. First up, Amir Khan to win on points vs. Phil Le Greco. Khan, horrendously inactive and coming off a horrible KO loss to Canelo will surely be looking to manage his way back into big-time boxing. Without a stoppage win of his own since 2012 and facing a man who’s only ever been stopped by the special talent of Errol Spence, I think 5/2 on offer for Khan to win on points is very attractive.

Secondly, Conrad Cummings to win via stoppage vs. Luke Keeler on the undercard of the Frampton bill, currently available at 11/4. Cummings is not a huge puncher, but should have too much for Keeler who’s coming off a very poor looking performance against Yorkshire journeyman Adam Jones in February. If Keeler performs to a similar level on Saturday, I just can’t see this one going the distance.

Finally, Zolani Tete to win via points vs. Omar Narvaez at 12/5. Tete shot to fame with his 11-second KO victory on the last Frampton show and with 21 KOs from 26 wins he can obviously get the job done inside the distance, but Narvaez has only ever been stopped by the hugely talented Naoya Inoue and I can see a full-distance fight here too.