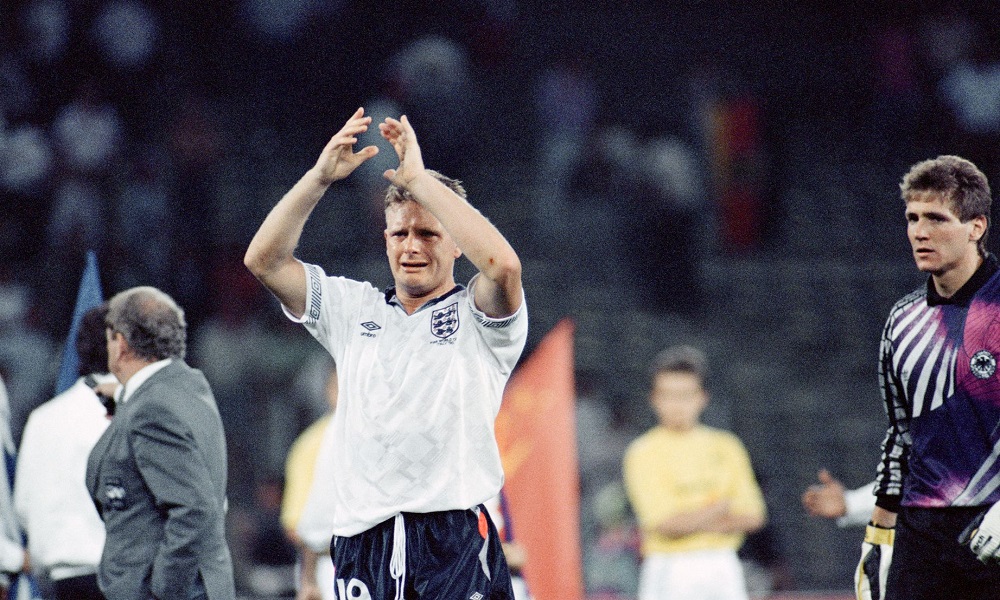 With Gareth Southgate getting the side back on track, we’ve decided to revisit some of England’s most outstanding performances of the last three decades. Bet on England here.

In truth, it’s pretty slim pickings – but let’s focus on the positives. Here’s Gazza and co at their finest… 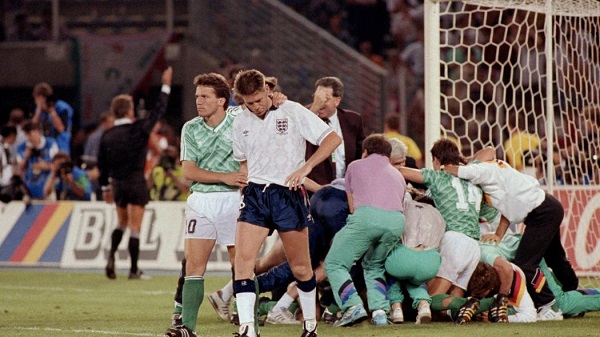 On the face of it, it’s a little disappointing that one of England’s most memorable performances of the last 30 years came in a game that, strictly speaking, they lost. Still, Bobby Robson’s team put in a fine showing at Turin’s Stadio delle Alpi – and in a World Cup semi-final, no less!

There had been some magical moments en route to this encounter, most notably an implausible 119th minute turn-and-volley from David Platt to break the deadlock against Belgium, though it was Gary Lineker’s run of goals (including two penalties in a quarter-final against Cameroon) that had propelled England this far.

And England began well here, the Three Lions having the best of it for most of the opening 45 minutes, even if Germany had Bobby Robson’s side under real pressure towards the end of the half. After the interval, Andreas Brehme would put Germany ahead in the 59th minute thanks to an unfortunate deflection off Paul Parker.

Yet the Englishmen reacted strongly, Paul Gascoigne creating a chance that Stuart Pearce put just wide, before Chris Waddle was fouled in the box, missing out on what looked to be a clear penalty.

In the 81st minute it would be Lineker who would provide the equaliser – his 10th goal of the competition – to take the game to extra time. It was during this period that Gazza lost his head, becoming tearful after receiving a yellow card for a daft tackle – had England made it to the final, the Geordie would have been ineligible to play.

Amidst Gazza struggling to keep a check on his disappointment, Chris Waddle hit the post, and David Platt had a goal disallowed for offside – while Germany were lively enough too, Guido Buchwald also being denied by the post in the dying minutes.

The score remained 1-1 – and a penalty shoot-out beckoned. Alas, the Germans proved hardier, Stuart Pearce and Chris Waddle each missing their kicks as England’s World Cup run stumbled to a bitter conclusion. Gutted. 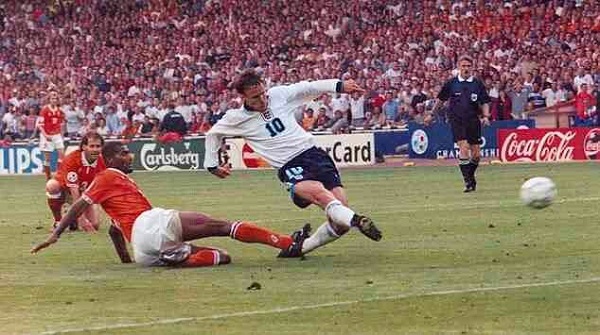 So, in 1990 England had put in a fine, battling performance against one of world football’s most dangerous sides – but ultimately they’d lost. Yet hosting the Euros in 1996, playing on the hallowed turf of Wembley, England actually played well and got the job done too. Yep, it really happened.

Okay, so the total football and Cruyff-turns of the 1970s Dutch masters weren’t on display here, but this was still a Netherlands side with plenty of talent, not least Dennis Bergkamp and Patrick Kluivert. Yet high on Britpop and home advantage, Terry Venables’ England side made short work of the Netherlands, the Three Lions looking like a real force, albeit fleetingly…

Alan Shearer opened the scoring with a penalty for England midway through the first half, Teddy Sheringham headed in a second from a corner five minutes after the restart – then six minutes later, Paul Gascoigne, Sheringham and Shearer linked up in style to make it three.

Sheringham would add a fourth minutes later, reacting quickly from a save to give England their most memorable score line on home soil since 1966, even if Kluivert scored a consolation in the 77th minute. England would edge out Spain on penalties in the quarter-finals, before going out to Germany on penalties (again) in the semis. 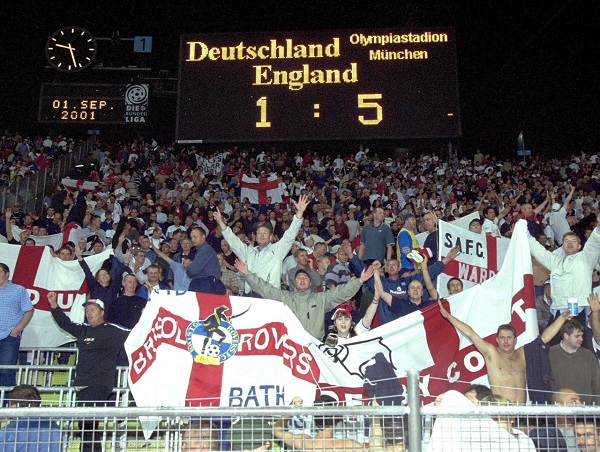 Okay, it doesn’t count for much in the grand scheme of things – and at the time this result was undoubtedly a bit of a false dawn, appearing to herald Sven Goran Erikson as England’s new saviour. It didn’t really work out like that in the long term, but at least we’ll always have that wonderful night at Munich’s Olympic stadium.

The game began in less than promising fashion, Carsten Jancker putting the home side up inside the first 10 minutes to begin what might have been a difficult night for the Three Lions and their oft-exasperated support. Yet England quickly struck back, Michael Owen quickly scoring the first of what would be a hat-trick.

Before Owen’s second and third, and with the interval looming, Steven Gerrard would put England into the lead with a 30-yard rocket. Just after the restart, Owen would make it 3-1, while he coolly dispatched his third in the 66th minute, at which point the Germans must have felt fairly bewildered. Emile Heskey would wrap up the scoring on the 74th minute to leave the hosts temporarily stunned.

Remarkably, this was the first competitive match England had ever won in Germany; prior to this game Germany had lost just one World Cup qualifier in their entire history. Still, a short-term setback for the Germans didn’t stop manager Rudi Voller from steering Germany to the 2002 World Cup final in Yokohama, Japan, where they lost to Brazil.

Indeed, in each of the last four World Cups, Germany’s worst finish has been third place; they are the current reigning champions. As for England, they’ve got progressively worst in the last three tournaments, failing even to make it out of the group stages in 2014. At least they did better than that this year…

For a wide range of football markets, check out 32Red Sport here. If you’re up for a flutter on table games or the slots, be sure to check out our award-winning casino too!