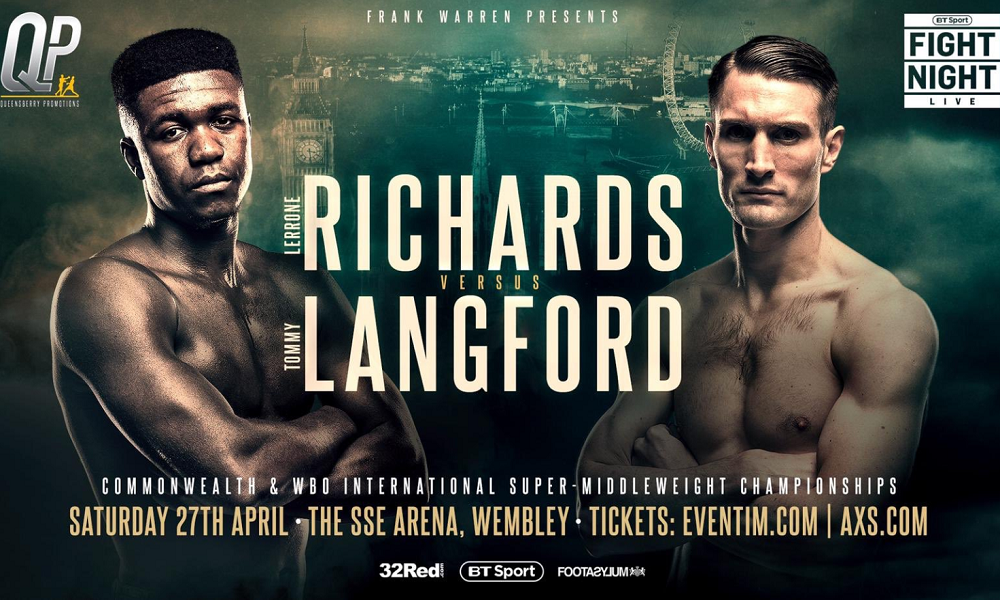 These days boxing fans watch shows with their thumbs hovering above the twitter app on their phone, waiting to pass judgement. It may not have the instant career affecting impact of a Roman Emperor’s thumb, but the worry of impressing the watching masses can clutter the mind and tighten the muscles of an inexperienced fighter.

So far Lerrone Richards has earned more plaudits for his exploits in the gym – where he once shared an infamous sparring session with Chris Eubank Jnr – than he has in the ring, but rather than piling pressure on himself by treating Saturday night’s fight with Tommy Langford as his lone opportunity to impress, Richards (11-0, 3 KO’s) is relishing being granted an hour of prime time television to show fans exactly what he is capable of. For all the latest fight odds, visit our sportsbook.

“I feel like it’s the sweet science and I just feel like if I keep pushing that and I can keep showing everybody what I’m about then people will start to fall in love with my style,” Richards told 32Red.

“I really do hope that people start appreciate my boxing. I hit and don’t get hit.

“I can’t wait. It’s my biggest fight to date and it’s on my biggest platform yet. It’s time to perform.

“I think that what I do is exciting. With the opponents that I’ve had I’ve done everything I could and I’ve beaten them as easily as I could have done. With boxing, it’s about making a fight as easy as you can. If you do that then you have longevity in the sport. Obviously I wanna perform and show people the type of explosive performance that I know I have in me. I know it’s a cliche but styles make fights and we’ll have to wait and see what Tommy Langford brings to the table.”

If you have never seen 26 year old Richards box, his choice of favourite fighters should give you a clue as to how he goes about his business. Pernell Whitaker and James Toney are two of his Youtube favourites but the man known as ‘Sniper The Boss’ is astute enough to realise that there are lessons to be learned from every fighter who reaches world level.

“I like to watch these slick guys fight boxers. I’m very good at boxing on the back foot but at the same time you need to know how to beat somebody who’s boxing you and not just pressuring you,” he said. “It varies and it depends on my mood. If I was in the mood to watch a war, I’d put on Arturo Gatti and Mickey Ward. You always have to be learning though. Even in that fight you can still see some skill. Look at the way they place the body shots.

“It’s weird. You have to mix things up because it’s an entertainment business. At the same time, when we get in the ring we’re putting our lives on the line and we need to try and win as safely and as clinically as we can. I’ve hurt most of my opponents and if I hurt Langford, I’m going in for the kill. He’d do the same if he hurt me.”

After giving up a part time job with Tesco, Richards is now living as a full time fighter. The spare time can be a blessing or a curse. Some fighters get bored, find eyebrow raising ways to occupy themselves and end up doing more harm than good. Others feel pangs of guilt about the alien long periods of down time and end up doing extra work and overtraining themselves.

“I feel very relaxed and excited. I’ve been training for such a long time now that I think we’ve got it down to a tee.

“Even when I was working I always overtrained. I always wanted to do extra. Nowadays I have all this extra time to relax and rest and I’m taking advantage of that. My trainers know when I’m tired or need a rest so it’s all been organised in the right way.”

Over the past decade, British boxing has ridden a wave of hype and trash talk. Richards joins a new group of silent but deadly operators which also includes 32Red ambassador Daniel Dubois and light heavyweight prospect Joshua Buatsi. Well-schooled and confident enough to let their actions create attention for them, the new breed are making waves.

Richards is a step behind his more high profile contemporaries at the moment but getting past Langford in impressive fashion this weekend will keep him hot on their heels.

“I’m trying to embrace everything now. I believe in earning your spots and putting yourself into position,” Richards said. “Why should I call out somebody who I know is well ahead of me? Let me earn my sport and put myself in that position and then I can mention their names.

“Everything I’ve got now I’ve earned the hard way. I believe everybody should have to do the same. For me, it’s about letting my boxing do the talking.

“At the same time if somehow pipes up and starts being rude, I’m not just going to let them disrespect me. At the end of the day, where it matters is in the ring. No matter what you say, if you can’t back it up in the ring all of the talking in the world can’t help you.”