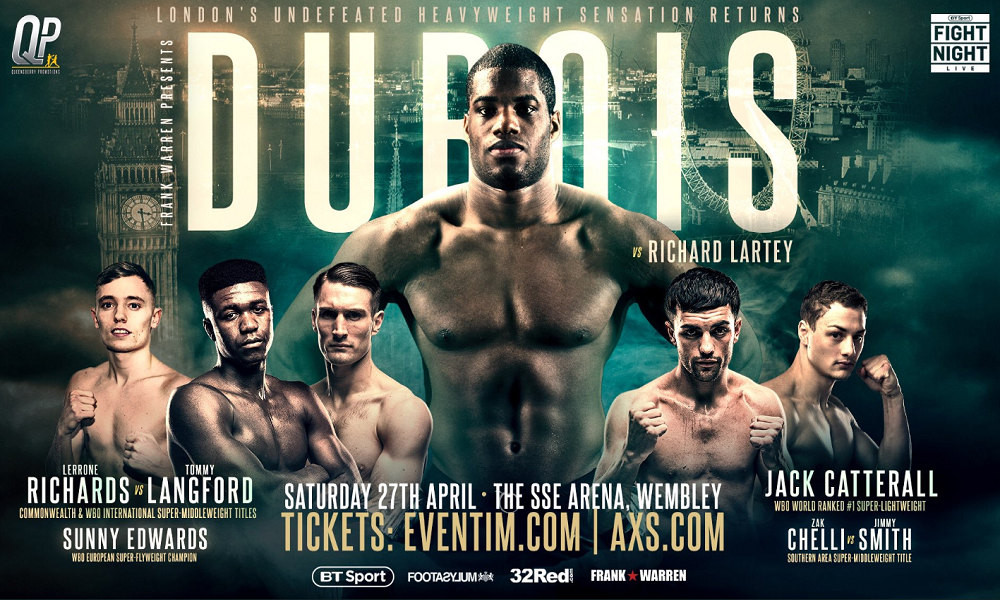 I was really happy with the knockout of Razvan Cojanu last month. I did a good job and it was a good night. It thought I performed well. A lot of great fighters have fought in the Royal Albert Hall before me so it was great to close the show in the way that I did. Daniel fights Richard Lartey on Saturday at Wembley’s SSE Arena – find all the latest betting here.

One fight can change everything. After months of being talked about in the same breath as Nathan Gorman and having our performances against Cojanu compared, now I’m being lined up to face Joe Joyce for the British heavyweight title. It’s a very exciting time.

The Lonsdale belt is a very important title for British heavyweights. It’s a very prestigious title and a lot comes with winning it. All of a sudden, everything steps up a level. As far as my career is concerned it’s a nice step up and winning that belt will just put a seal on it: I will be ready for those fights and that level of competition.

I’ve seen a Lonsdale belt up close before and I’d love one of my own. They’re beautiful looking belts and what a lovely reward to get for winning a fight. Being able to put one of those in the cabinet to cherish will be just brilliant.

All of our best heavyweights have held the title before going on to fight for world titles and I’m getting further and further along the road towards my number one goal of becoming the heavyweight world champion. I’m constantly doing everything I possibly can to be best that I can be. The fight with Joyce will be another good test along the way.

To be honest, I was as dumbfounded as everybody else when I heard that myself and Joyce had been ordered. The board make their decisions and match whatever fights they want to. Don’t get me wrong though, it’s very good news. It’s exciting. It’ll be a defining fight and a very important fight for me. Once everything is signed, sealed, and delivered, me and Joe can get it on.

Joe doesn’t seem to generate much power but his workload is pretty impressive for a heavyweight and amongst all of the other things which make and define a person,
it’s that workmate and determination which have got Joe to where he is.

Before this fight I was supposed to be going out to spar Kubrat Pulev but that didn’t happen and I was also due to go to America and spar Jarrell Miller before his cancelled fight with Anthony Joshua but the dates just didn’t work out. Like my trainer, Martin Bowers, says, ‘It isn’t how you get into trouble but how you get out of it’ and we arranged for some other good quality sparring to come in and help us out for Saturday night.

Professional boxing is so uncertain and nothing is written in stone. From my experience so far, anything can change in a split second and we’ll have to find a way around it. I’ll be more than ready for Richard Lartey on fight night.