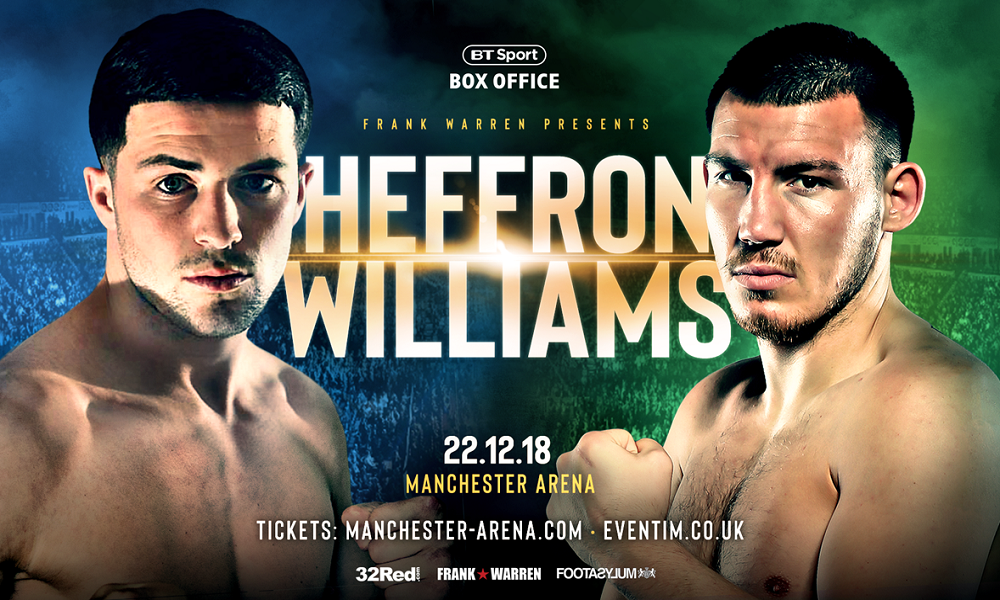 Liam Williams: I want the big fights again and I’ve got one now

In an era where the seemingly simple task of getting two men together to have a fight can involve hundreds of e-mails and months of back and forth demands, Liam Williams’ vacant British middleweight title fight with Mark Heffron this weekend was made in little over 140 characters. Find all the latest boxing odds here.

“They didn’t even offer me the fight. I told them to make the fight,” Williams told 32Red. “He was never ever in my plans. When Jay Metcalfe pulled out of the fight with me, I never even thought to myself about moving up [to middleweight] at first. I was flicking through Instagram or twitter or something and saw something on Frank Warren’s page about nobody being willing to fight Mark Heffron. I thought, ‘F****ng hell, that’s perfect.’ I was straight on the blower to my manager MTK and told them to just make it happen.”

Williams (18-2-1, 13 KO’s) has received plenty of credit for ‘stepping up’ to the challenge of taking on Heffron – an unbeaten puncher with genuine knockout power. Although the 26 year old Welshman volunteered himself for the fight and is making the move up to the middleweight division, it is the unbeaten Oldhamer who is taking a massive leap in terms of quality. With Heffron’s domestic rivals deeming the risk of facing him too great for the reward of a Lonsdale belt, it was left to former British champion Williams to answer the call. In doing so, he feels like he has pushed Heffron into a situation he isn’t fully prepared for.

“He’s been coming up slowly but now he’s jumping up levels. If I’m honest, I don’t think he’s going to deal with it well. He’s got used to bombing everybody out,” Williams said.

“I think all the other middleweights avoided him. It’s all well and good thinking that and believing you’re the man who everybody is scared of. It’s an achievement to make everybody avoid you and he’s obviously a good fighter but it’s going to take somebody like myself from a high level to ask what all the fuss is about. I think it’s going to backfire on him. I backed him into a corner didn’t I? He didn’t have a choice did he?

“I think he’s going to come out bombing and trying to take me out. If he doesn’t, he’ll make it an easier fight for me.”

Nowadays, many fighters choose to boil their bodies down in an attempt to be as big and as strong as possible in a lower weight class. Striking a balance between strength and stamina isn’t an easy task. After a certain point, every pound of muscle lost through dieting and every pint of water sweated out in training saps away vital energy. Rather than worrying about making weight, moving up to 160lbs has given Williams more time to grow comfortable working with Dominic Ingle in Sheffield and more energy to concentrate on the tactics he will need to employ to beat Heffron.

“I think this opportunity has come at a good time for me. The weight has been a struggle for a long time. I could still make the weight now and I could go back down after this fight for the right opportunity but it does make things easier for me, put it that way.

“To be honest, it’s crazy how it works. I’ve been offered the fight at 160lbs but I’m currently lighter than I would be at this stage if I were making light middle. I think I’ve just had that extra boost of motivation and the willingness to learn and train that bit harder. it’s made everything a little bit easier and depending on what gets offered to me after this fight whether it’s at 154lbs or 160lbs, I’ll see what the best deal is and take it.

“100%. It’s a bigger challenge for me. He’s a middleweight and a big puncher and everything else that goes with it. It’s got a bit more of a fire burning in my belly and it makes me want to prove people wrong even more.”

Williams is generally a no-nonsense quietly spoken man but his British title defence against Gary Corcoran and two world title clashes with Liam Smith were bad tempered affairs proceeded by endless trash talking. Back in 2014, Williams introduced himself to the boxing public when his fast hands and combination punching were just too much for Heffron’s brother, Ronnie. Heffron is certain to want to extract family revenge over the Welshman but, so far, he and his team have kept a respectful quiet. Williams believes the silence is due to the realisation that they have bitten off more than they can chew.

“I think that Mark is a fairly quiet guy but if he was fighting a lesser opponent with the same attitude as myself, I think he’d put it on them. He’s nervous though. Mark my words, he’s very nervous. He knows what he’s up against. That’s why he’s being quiet and respectful. I don’t think he believes in himself, that’s me being totally honest, I’m not being disrespectful.

“I had the loss to Smith – I don’t really feel I lost, it was very close and I could have nicked it – and I’ve been frustrated to be honest. I want the big fights again and I’ve got one now. You’re going to see why I’ve been frustrated on December 22nd and I’ll get my name back out there.”