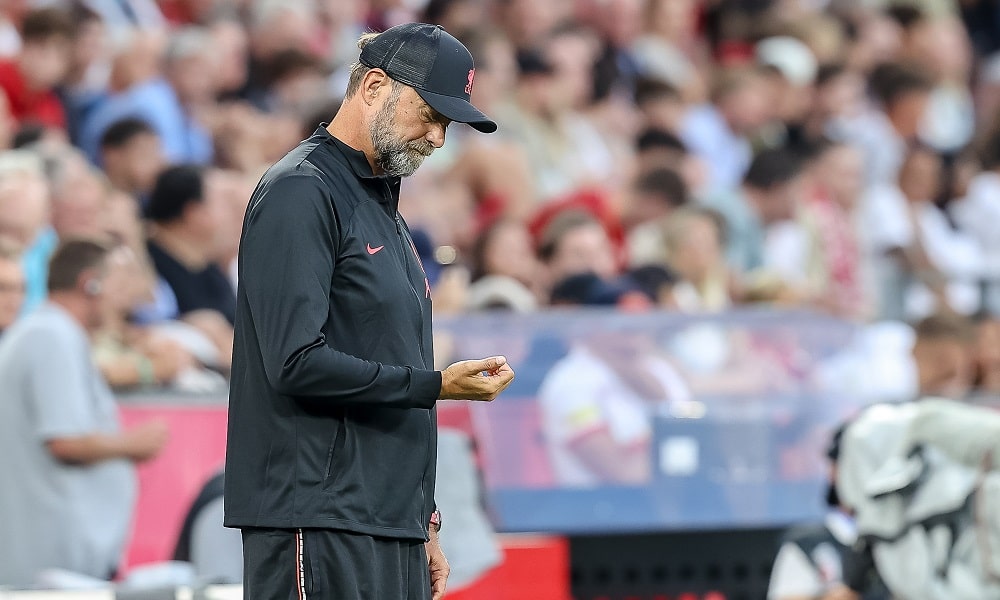 After an opening weekend that saw Jurgen Klopp’s side held to a draw against Fulham, Liverpool’s odds of winning the Premier League have drifted to 7/2.

The Merseyside team were 5/2 to win the title pre-season. And Klopp’s team had impressed against Manchester City in the Community Shield, winning 3-1 as new signing Darwin Nunez flourished with a goal.

Nunez didn’t start against the Cottagers on Saturday. But the Uruguayan came on from the bench in the second half to level the score, after Aleksandar Mitrovic had opened the scoring for the newly promoted side.

Mitrovic put the hosts in the lead again in the 72nd minute, with Mo Salah equalising for Liverpool to see the game end 2-2.

And with Man City having won their opener 2-0 against West Ham on Sunday, Liverpool are already playing catch-up with Pep Guardiola’s team.

City are just 11/20 to land the Premier League in this campaign, for what would be a third back-to-back title win. Guardiola has won the Prem four times since arriving in Manchester in the summer of 2016.

Those tempted to look past the two most obvious contenders will have been heartened by Tottenham, Chelsea and Arsenal, all of whom got off to winning starts this weekend.

Of that trio, Spurs are 12/1. Tottenham looked pretty convincing in their opening match, beating Southampton 4-1. And manager Antonio Conte has won the Premier League previously, leading Chelsea to the title in 2017.

Chelsea are 18/1 to win the Prem, with Arsenal 22/1. And after stumbling to defeat to Brighton at Old Trafford in Erik Ten Hag’s first game as manager, Manchester United are now out to 50/1 to win the title.

United started new signing Christian Eriksen as a striker, and brought Cristiano Ronaldo on in the second half, with neither man able to net for the hosts. And reports this weekend that United have been linked with a move for striker Marko Arnautovic – a move that the 33-year-old Bologna centre-forward has reportedly turned down – don’t exactly boost confidence that United are heading in the right direction. The Red Devils are currently 7/2 to finish in the top four, 17/20 for the top six.

Haaland scored a brace on his league debut

No such problems for Man City; Erling Haaland scored a brace on his league debut, and is currently the 5/4 favourite to finish the season as top goalscorer in the Prem; Mo Salah is 5/1, Harry Kane 7/1 and Darwin Nunez 9/1 in the same market.

If the contest for league glory is a straight fight between Liverpool and Man City though, this opening weekend is one to forget for the Reds.

In a statistical quirk, even though Liverpool ended up losing the title by just one point to City last season, Klopp’s side spent a total of just 11 days at the top of the Premier League. After having to pursue Pep for most of the previous campaign, now they’re right back in chase mode.

On the bright side, at least this isn’t the Bundesliga. Over in Germany, Bayern Munich started their campaign with a 6-1 away win, and are currently 1/6 to win the title…