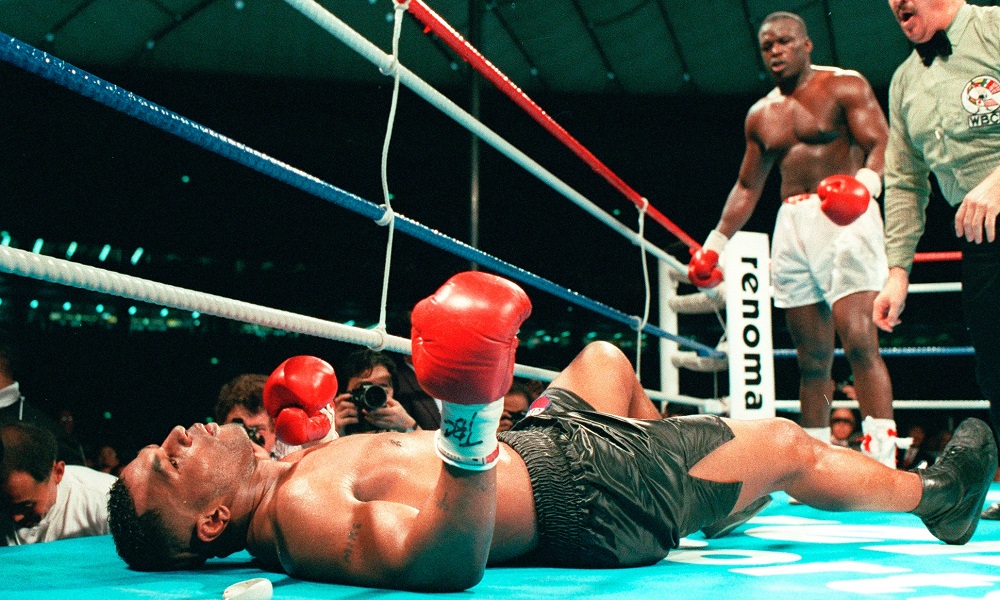 Upsets. Underdogs. Outsiders. The world loves an unexpected victory – so we thought we’d look at some of the most inspiring tales of boxers who beat the odds.

This was the apogee of modern-day upsets. Iron Mike’s well-deserved reputation as less a boxer, more an unstoppable engine of ferocity, meant no-one gave his opponent the faintest of chances.

Before this encounter, Tyson had won each of his 37 preceding fights. For his part, Douglas was a 42/1 shot in a two-horse race – and his preparation for the fight was hardly ideal, the Ohio fighter’s mother dying less than a month before the bout.

Perhaps Douglas used the pain of that loss to inspire him to achieve his greatest triumph. Certainly not at his best, Tyson still managed to put his opponent on the canvas in the eighth round. But the outsider would not stay down – and in the 10th round, Douglas caught the champion with a flurry of blows that sent Tyson to the deck, where he failed to beat the count.

Tyson’s aura of invincibility was destroyed forever. Buster lost his next fight against Evander Holyfield, but his place in history was already secure; he had beaten the baddest man on the planet.

The inspiration for the Russell Crowe film Cinderella Man, James Braddock was an American boxer who fought during the 1920s and 30s, the height of the Great Depression.

With his career on the wane, and having suffered injuries to his right hand, the New Yorker was forced to turn away from the fight game for a while, instead earning a living as a longshoreman on the New York docks (in the process, building the power in his left hand).

Braddock would make a remarkable comeback, eventually booking a fight with then world champion Max Baer. Braddock had won his three previous fights in the run-up to this bout, but was still thought to be some way below Baer’s level.

Baer approached the fight with complacency, failing to train seriously for the clash – while Braddock knew just how important this fight could prove. A 10-1 shot for victory, Braddock withstood the best that the brutal Baer could throw at him, eventually winning on points by unanimous decision.

These days, Bruno may be remembered more for his genial personality and ‘you know what I mean, ‘Arry’ catchphrase than his successes in the ring – but the British heavyweight deserves better than that.

At Wembley Stadium, Bruno launched his fourth attempt to win a world championship, finally winning the title that had eluded him so long as he beat the US fighter Oliver McCall on points. This despite the fact that a previously sluggish McCall had looked dangerously capable of forcing a knockout in the final round, belatedly coming to life as a bloodied Bruno hung on. But no matter the circumstances; Bruno had done it.

The victory meant Frank’s next bout would be with a past-his-best Mike Tyson – though the American still had too much for the British boxer, stopping him in the third round for what would turn out to be Bruno’s swansong.

In 1992 the US fighter known as Vinnie Pazienza (he would legally change his name to Paz in 2001) was involved in a car crash so serious, he was told he might never walk again.

Having broken his neck and finding himself forced to wear a metal cage screwed into his skull during his recovery, few could have believed that the fighter would ever enter the ring again.

Yet just over a year later, Paz would return to boxing – and win. The self-styled ‘Pazmanian Devil’ would defeat Luis Santana by a 10 round decision, putting his opponent on the canvas twice in the ninth round. “I was trying to put him down the third time!” the irrepressible fighter said afterwards.

It’s an amazing story that inspired the 2016 movie Bleed For This – and Paz’s post-crash success was no one-off, his fighting career continuing on over the nineties and early 2000s.

Continue Reading
You may also like...
Related Topics:32Red, Boxing, featured