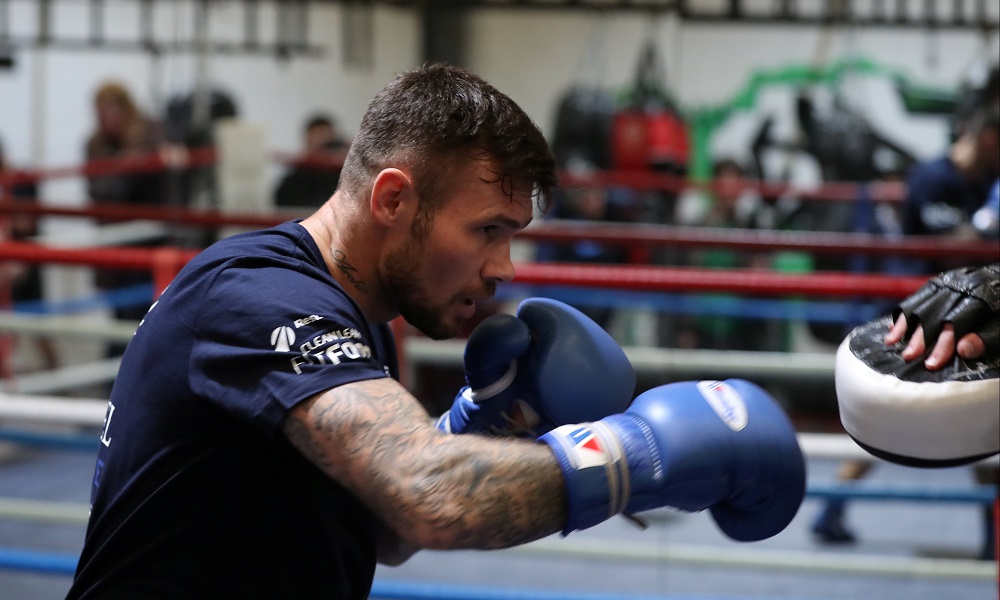 In part one of this exclusive interview with 32Red, Martin Murray told us about his Everest quest, becoming wiser as he grows older and his life outside the ring. Here’s part two:

Whether it’s the image of Kevin Keegan falling off his bike on to a cinder track, or Brian Jacks banging out a record number of dips in the gym, everybody of a certain age has their own favourite memory of the TV show ‘Superstars’. There is no footage available – believe me, I tried to find it – but years ago, Murray competed against a host of other local fighters in a boxing version of the sporting extravaganza.

The competition may have been a bit of lighthearted fun but for Murray and his then pregnant wife, Gemma, the prize on offer meant the world. Times have changed. Murray’s determination to improve his lot opened up avenues he once couldn’t have imagined. Boxing has provided a comfortable life for his family but Murray also runs a cafe in St Helens which specialises in healthy food and is about to start promoting an autobiography which will let readers into his colourful past.

“It’s funny. A couple of weeks before I won Prizefighter, Gemma was pregnant with our Archie. Steve Wood had a VIP Games at Robin Park sports centre in Wigan,” Murray told 32Red. “It was a little get together where all the VIP Promotions fighters went to compete. It was stuff like how many metres you could row in a minute and how many clean and presses you could do. How many penalties you could score. How many baskets you could score. That kind of thing. The winner got 500 quid. I remember coming second. I won 300 quid and me and Gemma were absolutely buzzing because we didn’t have much money and we knew we could get Archie’s pram.

“When I won Prizefighter I was over the moon to win but I was elated that I’d won £25,000. I was buzzing. Obviously it’s gone on from there. When I fought Felix Sturm I established myself on the world stage. I knew on the back of that I was gonna get another world title fight. I went on to fight Sergio Martinez and was hard done to but I knew I was there and I knew I’d get some big fights. All of the hard work had paid off.

“I’ve always gone under the radar because I haven’t had a steady promoter. I started off with Steve Wood on small hall shows fighting opponents three times bigger than me. Then I went to Hatton Promotions. I signed with Rodney Berman in South Africa and had some exciting times in Monte Carlo in the build up to fighting Golovkin. Then I went with Eddie Hearn. After I fought Arthur Abraham it went stale and I began to wonder what I was doing. All of that has brought me here, now.

“When I had all of those other chances I was looking forward to the future and that my career was just beginning. Now, I’m ready for the end. I’m confident that I win this fight but if I don’t win I’m gonna retire. If I do win I’ve only got two fights left. There will be a rematch with Billy Joe and another big one. That doesn’t stop me giving this fight my all.”

Promoters may have come and gone as Murray has sought out the highest profile challenges available but his trainer, Oliver Harrison, has been a constant calming presence. Harrison’s brave – and so far successful – battle with serious illness has resulted in Murray spending more time at Jamie Moore’s gym in Astley.

Murray has approached each of his four previous title shots in the same measured way that he has his career as a whole. The tactic has secured him a foothold in his fights with Felix Sturm, Sergio Martinez and Arthur Abraham but it has also allowed his opponent to stake their own claim. Gennady Golovkin apart, Murray has campaigned on equal terms with world class opposition but has never quite been able to put enough distance between himself and to convince the judges he deserved the nod.

The combination of an energetic and invigorating atmosphere in a bustling gym and the realisation that the end is close is pushing Murray on to attack what could be the final rounds of his career with the same ‘once in a lifetime’ attitude he is tackling his trek to Mount Everest base camp with.

“I’ve been with Oliver for a long time now. His tactics for Sergio Martinez were bang on and I’ve said that I’ll go to his gym once a week through loyalty to show my face and to work through tactics for Saunders. I’ve been honest with Oliver though and where I am now at this stage in my career, physically and especially mentally, I’m happier at Jamie’s gym. I’ve seen the same gym for over ten years. Jamie’s a quality coach, the craic is brilliant with all the lads in and it’s great for me at this stage in my career.

“When Oliver became ill and I went with Jamie, I told him how I want to fight. We’re on the same page. Me and Oliver are too but I just feel happier at Jamie’s these days.

“I’ve got a different team around me in the gym but the same team will be in the corner. If it were local Oliver would have been in the corner but it’s in London and people don’t really have any idea how bad he’s had it. It’s a miracle he’s even here. I’ll still have Jamie and Nigel Travis, Alex Matvienko and Frank Hopkins with me.

“This chance has come. We’re completely on the same page.”

Martin Murray fights Billy Joe Saunders on June 23rd, 2018 – the bout has been postponed from its original date in April, after Saunders injured his hand in training. To see our latest boxing markets, check out 32Red Sport here. If you’re up for a flutter on table games or the slots, be sure to check out our award-winning casino too!