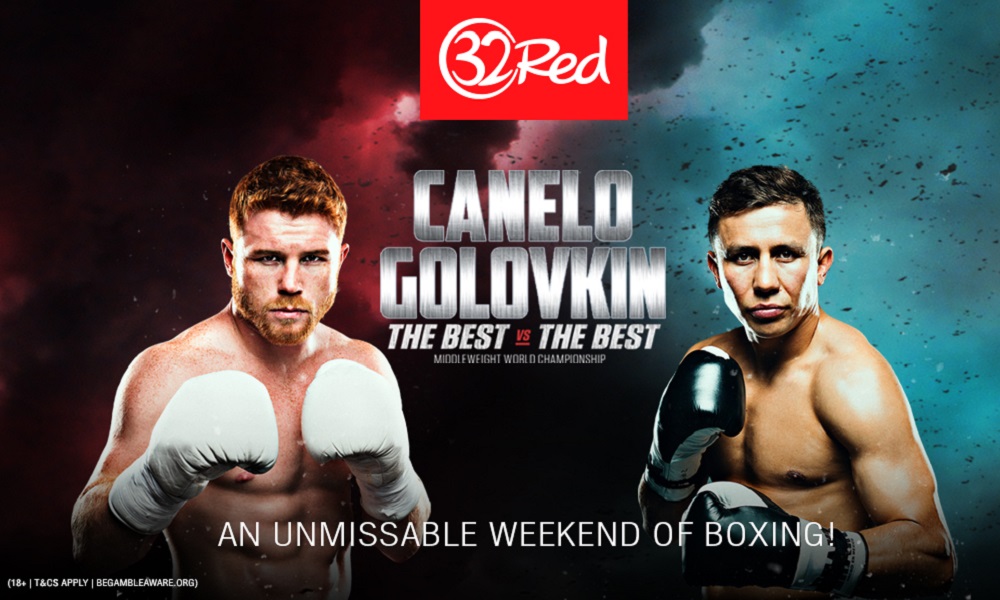 32Red are sponsoring BoxNation’s coverage of Saturday’s sensational middleweight mega-fight between Saul ‘Canelo’ Alvarez and Gennady Golovkin. Earlier in the evening, live and exclusive on BT Sport and BoxNation, WBO middleweight champion Billy Joe Saunders will defend his title against talented American Willie Monroe Jnr in a mouthwatering appetiser. With top class action on both sides of the Atlantic, Saturday looks set to be the highlight of the year for boxing fans.

As part of their fight week coverage, 32Red have conducted exclusive interviews with both Saunders and Monroe Jnr and have also spoken with heavyweight sensation Daniel Dubois, who fights A.J Carter for the Southern Area title on Saturday, and light heavyweight hope Anthony Yarde, who will aim to continue his unbeaten run agains Norbert Nemesapati.

To round out the week we caught up with ten of British boxing’s most well-known pundits, well-respected trainers, and most exciting fighters to gauge their opinions ahead of the mega-fight between ‘Canelo’ Alvarez and Gennady Golovkin.

I’m going for Golovkin. I always stick with my first instinct and it’s always been Golovkin. ‘Canelo’ is the better boxer, the better thinker and probably the more versatile of the two but I still think that he has to hold his feet to have any effect on Golovkin and push him back and holding your feet against Golovkin is a dangerous game. ‘Canelo’ effortlessly throws punches in combination and looks great doing so. That’s his strength but it might work against him. He won’t throw single shots, I think he’ll throw in combinations and if Golovkin can throw with him, there’s only one winner there. I think ‘Canelo’ will go for the body early and neither has shown any frailties around the chin. They’ll both be tested but ultimately I think Golovkin will either make up a points deficit in the second half or get a late stoppage.

I think in the first round Golovkin will probably go to the middle of the ring and ‘Canelo’ will be happy to have a look and box around him. About three or four rounds in, I think Golovkin will start throwing proper punches. In his head, he’ll be looking for the knockout. That’s when they’ll start exchanging and we’ll see how good ‘Canelo’ is. Is he one of the pound-for-pound great fighters? We all know he’s good and he’s got better since the Mayweather defeat but I don’t think he’s been pushed since. I think ‘Canelo’ has got more in his locker and I feel he may amaze us with his boxing skills from the midway point onwards and take a good points win, maybe only losing three rounds in the fight.

Golovkin by stoppage. I just think that when he wants it to be, his defence can be great. When he fought David Lemieux I think he knew that if he got caught it might be game over. He’s got a great defence when he wants to use it. When he knows he can walk through people he’s lackadaisical. He knows he can’t be lazy with somebody like ‘Canelo’ and he’ll be switched on. ‘Canelo’ won’t have fought anybody who can punch like him and it’ll be a massive shock to the system.

Billy Graham, former trainer of Ricky ‘The Hitman’ Hatton and countless other champions

I think we’re going to see the best ‘Canelo’ we’ve ever seen because he’s finally fighting at the right weight. I know a lot of people think Golovkin is slipping and possibly – because ‘Canelo’s’ people made him wait for so long – he is but I don’t think so. I think there were reasons for his last two performances. He was ill for the Kell Brook fight and in Danny Jacobs he fought a tall guy who was probably over the light heavyweight limit. I’m expecting it to be very technical at the start from both sides but I think it’ll become brutal and I see Golovkin stopping him.

I’ve never gone against GGG before but I do think ‘Canelo’ for some reason. I just think ‘Canelo’ outboxes him and beats him on points. The movement gave Glolovkin plenty of problems against Danny Jacobs and if ‘Canelo’ can replicate that – and I believe he can – that can be the difference. If he can punch and move he’ll outbox and outpoint him. If he stays on the ropes like he did against Liam ‘Beefy’ Smith, I do think Golovkin can land and maybe knock him out but I think ‘Canelo’ is too clever to stay there.

I’ve been with ‘Canelo’ since day one, even before the last couple of fights where people have been going for him. A lot of people have gone for ‘Canelo’ since Golovkin fought Danny Jacobs but I’ve been there since before then. It’s 22 months since Oscar De La Hoya famously said to Golovkin, “Make sure your phone is on tomorrow morning” after ‘Canelo’ beat Miguel Cotto. Even then I fancied him.  I just think he’s still coming into his best and the other fella has just about peaked. I fancy ‘Canelo’ to win on points. I don’t think Golovkin is shot at all, I just think he’s plateaued out a bit. It’s not one of those fights where people will be able to say, ‘I told you so.’ Look at ‘Canelo’ learning fights. Not just Mayweather but Erislandy Lara and Austin Trout. Those are second to none and his defence is so good.

I’m going for Golovkin on points. I think he’s got a better jab and he’s slightly the bigger man. From the pictures I’ve seen from his training camp, ‘Canelo’ looks in cracking shape but I think if you put all that muscle on it might slow you down and stylistically I’m going to go for the naturally bigger and longer man. If Golovkin turns up with the jab that he had in the David Lemieux fight, it’ll be quite a convincing win.

I’m going for Golovkin on points. He’s got a much better amateur pedigree, better boxing I.Q and he’s just a bigger, better boxer all around. This is the reason that there are weight divisions in boxing but we’ll see!

I’m gonna go for Golovkin. I reckon he’ll get the stoppage in about eight or nine rounds. I’ve a feeling that ‘Canelo’ has seen Golovkin’s last couple of fights and thinks this is the end of him but I think he might blow himself up. I think there will be a few scares in the fight but there’s just something about Golovkin. He’s physically and mentally stronger than anybody else I’ve seen during my time in boxing. I think against Kell Brook he thought that he just had to turn up to win but he’ll be taking this one very seriously.

I think ‘Canelo’ is going to beat Golovkin because he’s got more to his arsenal. I think GGG is quite one-dimensional. He’s good at one thing and although he does that one thing very well, at the highest level being really good at one thing isn’t enough. I think it’s going to be entertaining because they’re both great fighters. Whatever the outcome, it’ll be entertaining. I think Golovkin’s defence is quite flawed. I don’t think he’s a great defensive master but one of his main weapons is fear. He strikes fear into every person he fights. The people who don’t care about that catch him but then his power comes through. When you’re at the highest level, you have to have more than one trick. I would not be shocked or surprised if ‘Canelo’ stops him.

You can also win tickets for future boxing events with our Boxing Giveaway – just opt in first to ensure you qualify.

If you’re up for a flutter on table games or the slots, be sure to check out our award-winning casino too!

Canelo v GGG Preview: We’ve had the event of the year, now for the fight of the year
Tyrone Nurse exclusive interview: Boxing is a thinking man’s sport