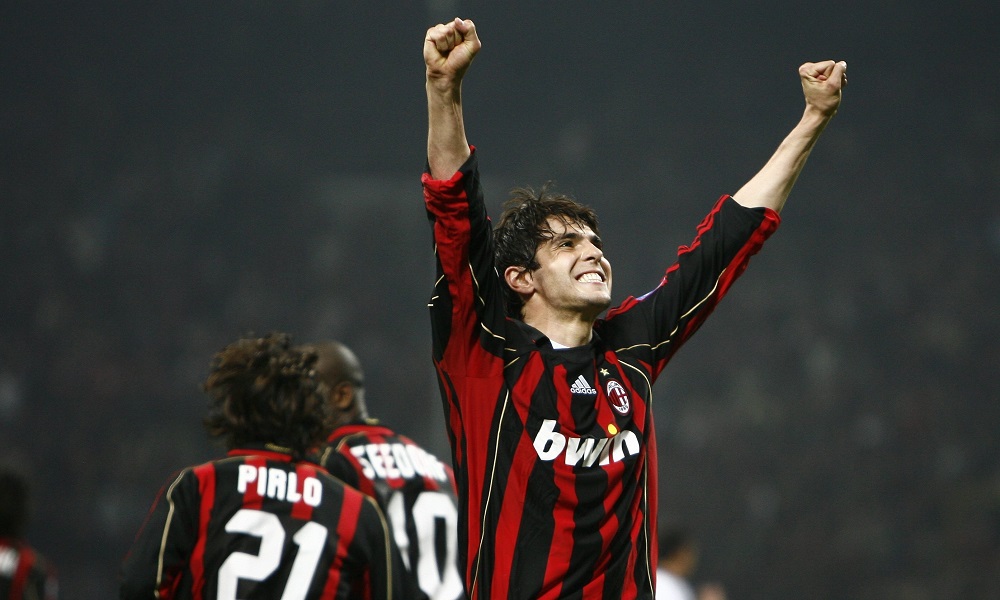 Completely Kaká – the highs and lows of the Brazilian great

World Cup winner, Champions League winner, Ballon d’Or winner. Kaká is one of just eight players in the history of the game to have completed that particular hat-trick – and at his best, it was a sheer delight to see the Brazilian with the ball at his feet.

But who was this clean cut, immaculately well-mannered young man with speed, power, finesse, the entire package on the pitch – plus a devout faith in Christianity that made him ideal son-in-law material too?

Ricardo Izecson dos Santos Leite is Kaká’s real name – the nickname came about because as a child, his younger brother Digão had difficulty pronouncing the name Ricardo.

Now 38 years old and retired since 2017, Kaká made his professional debut 19 years ago, turning out for Brazil’s Sao Paulo in 2001 – where he quickly established himself as a wonderful prospect. He would also figure in Brazil’s 2002 World Cup squad, with the team going on to win the Korea/Japan event – though Kaká himself made just one appearance at that World Cup.

A year later, Kaká would make the move to Serie A’s AC Milan – the club where he would enjoy his greatest successes. But Milan was also where the playmaker would experience one of his most extraordinary disappointments, losing to Liverpool in the 2005 Champions League despite Milan having been 3-0 up at half-time.

Reduced to that summary, it really sounds like Milan carelessly blew the game against Liverpool. This isn’t the time or place to get into that – but we can say assuredly that Kaká played some sublime football in Istanbul, even if he didn’t end up on the winning team – see this video for proof of that.

In fact, for his performances during that Champions League campaign, Kaká was named UEFA’s club midfielder of the year in 2005, with the Milan midfielder laying on more assists than any other player.

Like so many other special talents, Kaka’s greatness was compromised by injury; but even before he became a professional, the young Kaká had overcome physical problems, injuring his back in a freak water slide accident as a teenager that saw him fracture his spine, and could have left him paralysed.

He recovered to become one of the finest players in the history of the game – here are a few of his highlights.

Serie A title win in his debut season

In his first season for Milan, Kaká would immediately make an impact, scoring 10 goals for the Rossoneri and otherwise playing a significant role in helping the team win the scudetto for the first time in the 21st century.

Kaká would also be named the Serie A Footballer of the Year in his debut season in Italy.

Two years after the events of Istanbul, Milan would face their English nemesis once again – and this time, the Serie A side finished the job.

En route to that therapeutic final, Milan would defeat Bayern Munich in the quarter-finals, winning two-nil in Germany after Kaká had scored a late penalty to salvage a late draw for Milan in the first leg at San Siro.

In the semi-final, the Italian side would see off Manchester United 5-3 on aggregate, with Kaka scoring three goals – including the one on the video clip above that the man himself would later refer to as his greatest ever goal.

Next came the final, and that opportunity to exact revenge against Liverpool – and this time, there would be no implausible turnaround for the Merseyside team. Milan won 2-1 in Athens, Kaká providing the assist for Pippo Inzaghi’s decisive second goal.

In December 2007, Kaká would be recognised with European club football’s most prestigious individual prize, becoming the last player to win the Ballon d’Or before Cristiano Ronaldo and Lionel Messi began their ten-year duopoly of the award (Luka Modric has since won it too).

Years later, Kaká would acknowledge Messi and Ronaldo’s excellence, telling Marca newspaper in 2016: “You could say that I was the last Ballon d’Or winner to have been born on this planet.”

After another couple of seasons at Milan where Kaká continued to impress as one of the greatest talents in football, in 2009 the player would move to Real Madrid for €67million. Unfortunately, soon after joining Real he would sustain significant injuries that hampered his progress with the Spanish club.

Real manager Jose Mourinho didn’t seem to coax the best out of Kaká, although the player was part of the squad that won the 2011-12 La Liga championship. A return to Milan in 2013 on a free transfer started ominously; captaining the side, Kaká tore a muscle in his first competitive game back for the Italian side.

His second stint at Milan lasted just until the end of the season, the then 32-year-old moving to the USA’s Major League Soccer at the start of 2015, where he would become the league’s highest player on a salary of around €6.6million a year, plus bonuses.

It’s always nice to be well paid – but for a time, Kaká was less about taking the big pay-day, more about pure talent, God-given or otherwise. An absolute joy to watch at his finest, Kaka found his little slice of heaven on Earth for a while – and had the fans in raptures, too.

Mid-June restart expected for Premier League
Das reboot: what to look out for in the Bundesliga this weekend