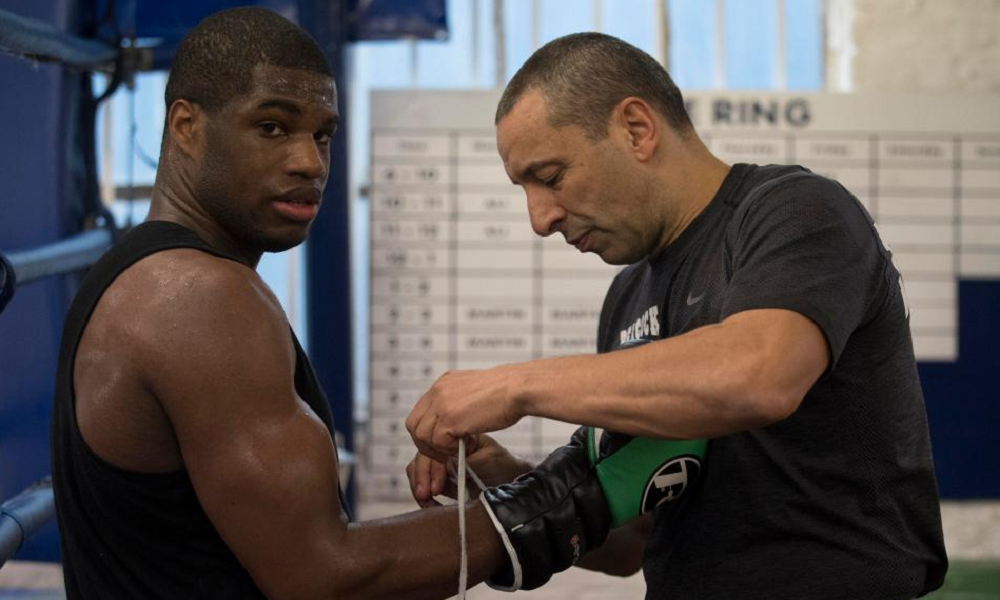 The eagerly awaited British heavyweight clash between 32Red ambassador, Daniel Dubois, and Nathan Gorman draws ever closer and 32Red continue our build up to the fight by catching up with the man charged with ensuring Dubois enters the ring in peak condition. For all the latest fight odds, visit our sportsbook.

Martin Bowers has overseen the unbeaten 21 year old’s seamless progression and knows exactly what makes the enigmatic destroyer tick. Speaking from the famous Peacock Gym in East London, Bowers gave 32Red a unique insight into the final weeks of Dubois’ preparation and gives a hint as to what fans can expect when the two undefeated heavyweights collide this weekend.

“For the final couple of weeks Dan’s been mainly sparring. We concentrate on that and not so much on the other physical work you usually do in the gym. All of his energies need to be used for the sparring. We’ve got serious sparring partners and these are big boys throwing big shots at each other.

Typically, he’ll probably run on a Monday morning and then – using this week as an example – he’ll spar. He did eight really good rounds and then we did four rounds of pads and a bit of stretching.

Tuesday we were in the gym. He’ll run, skip and then do the usual stuff. Bags, pads, and a bit of technical stuff that we’re working on for Nathan and then sparring again on Wednesday.

The week before fight week might involve a final sparring session and some pads and tapping out but he’s ready to go. We can’t leave it at that, we’ll work on some speed drills and plenty of talking and banter with the boys but it’ll just be about being in the gym enjoying the last days before the fight. I don’t want things to be stressful.

We have a programme and – like most professional athletes – I’d guess it’s quite boring. It’s very repetitive. You have to do drills, drill, drills. There’s no secret to it, It’s all down to hard work. There’s a routine to follow and it’s eat, train, sleep, and repeat. Let’s hope it carries on working.

Obviously, Nathan’s got a gameplan and Daniel has a gameplan. Both boys have different scripts and both boys will be reading off those scripts trying to impose themselves on each other. As in all fights, your gameplan is only really a skeleton. Once the first round is over, you have to re-adapt and you might have to have a few different things to work on. That’s what we’re working on at the moment.

That’s what makes a good fighter. They have to be able to suss it out by themselves. It’s no good painting by numbers.

Dan is a good boy. The good thing about him is that he’s really focused. He might look like he’s not taking a lot of notice but he takes it in. You’ll say something and he’ll go home and really think about it. I always tell him that he has to tell me what he’s thinking about things and then it’ll work best. It can’t always be all me. You have to draw that out of a fighter.

All of Dan’s fights so far have been progressive and – I might be wrong here – but I think he’s improved a bit each time. That’s not blowing smoke up our arses because we train him, it’s down to progressive fights. He hasn’t been allowed to get stale. If Dan beats Nathan – and obviously that’s what we’re planning on happening but nothing is a foregone conclusion – then I think that’ll be our level for the next year to 18 months. I don’t think we should rush him beyond that level.

Nathan is at the same level as Dan. There’s nothing in this fight. I’m no fool, this is an absolutely cracking fight. A lot of other people should take note. This will get the public talking. It’s two good fighters taking each other on. They’re not calling each other out or calling each other names, Nathan is buying into it a bit but that’s allowed. I don’t mind that. He’s a nice kid. Let him do their thing if that’s how they think they’re going to get into Dan’s head but they won’t. I’ve been everywhere with Dan and he doesn’t flap. He’s bulletproof. He’s a terminator. I don’t want to oversell him or talk out of turn and we don’t have to shout about things, we’ll see what happens on the night.

I’ll tell you how focused Dan is. A few weeks ago, the WWE were doing a show at the O2 and they wanted Daniel to go along and introduce him to the crowd. I told him that the WWE had been on and he said ‘Who are they?’ I told him it was the wrestling people. Bear in mind he doesn’t watch television. They don’t ask many people. I’ve seen Floyd Mayweather and Mike Tyson go along and do it so it’s really good company to be in and I thought he should be honoured to go along. He said, ‘Do I have to? Martin, I’d rather just train.’ He didn’t go. It’s not him being rude to them or disrespectful, his opinion is that ‘I fight’.

They’re two really good boys. As long as the public get a good fight and they both come out healthy, I’ll be happy.”