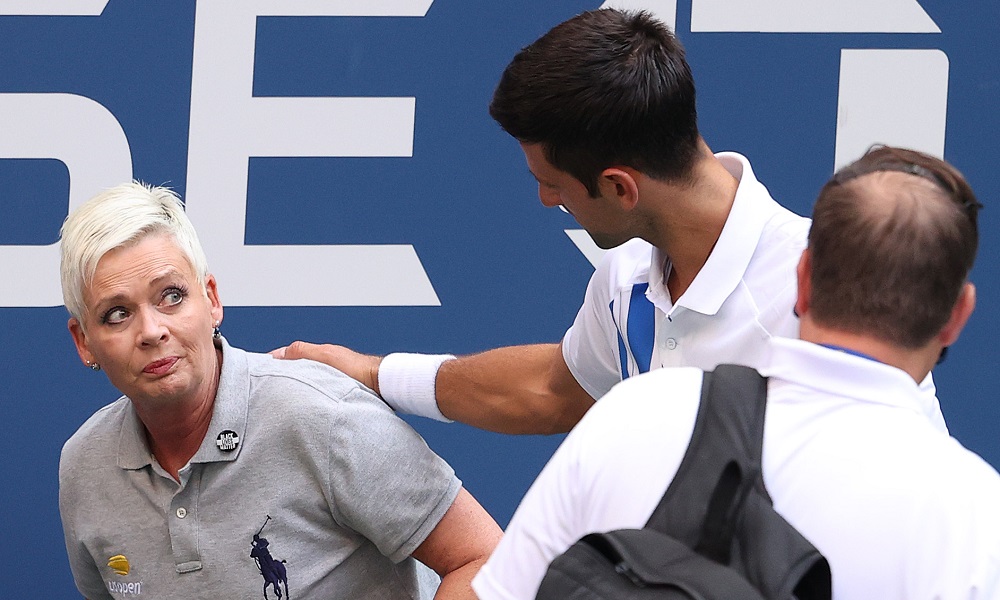 He’s a hell of a player, but Novak Djokovic is not so hot when it comes to humility. “Dim” Novak hasn’t lost a match all year – yet from a public relations point of view, 2020 has nonetheless proved fairly disastrous.

The first Djok-blocking beat came way back in January, when the Serbian was hit with a $30,000 fine after abusing an umpire at the Australian Open. Since then, the 17-time Grand Slam winner has ruffled plenty more feathers, speaking out against the surely uncontroversial idea that all tennis players should be required to be vaccinated against COVID-19.

With a seeming disdain for the seriousness of the worldwide pandemic, Djokovic also organised a series of tennis events, the Adria Tour, during the height of the crisis – and subsequently caught the coronavirus during one of the events.

Most recently, during a moment of annoyance mid-game at the US Open on Sunday, Djokovic hit a tennis ball in the direction of a line judge – with the ball hitting her straight in the throat. The 33-year-old was quickly disqualified from the prestigious tournament, and has apologised for his actions, calling the incident “so unintended”.

Alas, the current world No. 1 is just part of a well-established tradition of tennis twattery…

First dubbed Supermac, then Superbrat by the tabloid press of the day, McEnroe was a brash American playing at Wimbledon in a time when England’s lofty ideals of decorum and etiquette were still reasonably well upheld.

McEnroe’s reputation as pantomime villain of tennis was such that when he stepped onto centre court for the 1980 Wimbledon final against Bjorn Borg, he was booed by sections of the crowd even before he hit a ball. McEnroe would eventually lose a five-set classic against the Swede – but it was his appearance at the event a year later that gave the world his trademark cry of exasperation.

Uttering the words “you cannot be serious” on several occasions to umpires he disagreed with, McEnroe also told one official he was “the pits of the world”. McEnroe’s bad-tempered antics would continue throughout his career – though they didn’t prevent him from attaining greatness, winning Wimbledon three times and the US Open on four occasions.

Occasionally, like all of us, Andre Agassi would lose his temper (see the above video). But actually, Agassi didn’t really get up to a whole lot of confrontational nonsense on the court. When he first came to the sporting world’s attention, his greatest misdemeanour was to wear some garish gear (again, see the above video) which got him into trouble with tennis’ up-tight establishment.

Still, boasting a 20-year career where he won every Grand Slam tournament and overcame a protracted spell of decline to come back even stronger, perhaps concentrating on the lurid clothes of Agassi’s early years misses the bigger picture.

Nonetheless, the Las Vegas-based star’s insistence on unusual attire was an issue – in his early days, it meant he chose to avoid playing at Wimbledon altogether, since the English tournament insisted players wore predominantly white clothing.

That’s a pretty silly reason not to play one of tennis’ four grand slam tournaments – and Agassi eventually relented, going on to win Wimbledon in 1992. But even after that, the American still found time to titillate the tabloids, not least when he struck up a romantic relationship with Barbara Streisand, the actress and singer some 28 years older than Agassi.

Other than that, Agassi is also notable for the jaw-dropping revelation that during the final of the 1990 French Open, the poor sod couldn’t keep his mind on the match because he was concerned his flamboyant hairstyle (again, see the video above) would be exposed for the wig it actually was; Agassi was terrified his rug would come loose mid-match.

Admitting to the toupee torment in his autobiography, Agassi wrote “During the warming-up training before play I prayed. Not for victory, but that my hairpiece would not fall off.” His prayers were answered. The wig didn’t fall off – and he didn’t win the final.

The Romanian was one of the world’s greatest players during the seventies, winning both the French and US Open and making two finals at Wimbledon. Yet Nastase’s obvious quality went hand-in-hand with his tendency to lose his temper.

During a quarter-final match at Wimbledon in 1977 he entered into a row with umpire Jeremy Shales, the Romanian yelping “Mister Nastase to you! You call me Mr Nastase!” after Shales had reprimanded the player using only his surname.

Nastase’s idiosyncratic personality didn’t mature with age either; in 2017, at the age of 71, and serving as Romania’s Federation Cup captain, Nastase made derogatory comments about Serena Williams that the man himself insisted had been intended as a joke – but that saw him banned from taking any professional role in tennis for a four-year period. Prior to that incident, at the same event Nastase had also asked GB captain Anne Keothavong for her room number…

A gobby, talented, tortured player who admits he’d rather be on the basketball court than the tennis court, Kyrgios is the ill-disciplined Australian who simply can’t stop self-sabotaging. Like the bad boy hero of an eighties sport movie, though so far without the redemptive climactic moment where he learns to channel his aggression productively and seize ultimate glory in classic sporting fashion, Kyrgios can’t stop making dumb, dumb decisions.

Since coming to the notice of the general public in 2014 when he beat world No. 1 Rafa Nadal at Wimbledon, Kyrgios is still yet to progress any further than the quarter-finals in any grand slam, and has won just six singles titles.

He has a reputation for “tanking” – choosing not to play to the best of his ability when things are going against him. In the above video, such is Kyrgios’ lack of effort he brings to mind Richie’s tennis meltdown in Wes Anderson’s The Royal Tenenbaums.

Alas, not all of Nick’s nitwittery has been so cinematic. Kyrgios has also taunted a rival about his lovelife, smashed multiple racquets in anger, hurled a chair onto the tennis court mid-match – and even told an umpire to “call time so I can go home”. He’s not a good loser, is what we’re saying.

To see all our latest tennis markets, check out 32Red Sport here. If you’re up for a flutter on table games or the slots, be sure to check out our award-winning casino too!

Can’t win ‘em all: The worst ever losing streaks in sport
Sorted for sport – what events are worth a flutter this week?