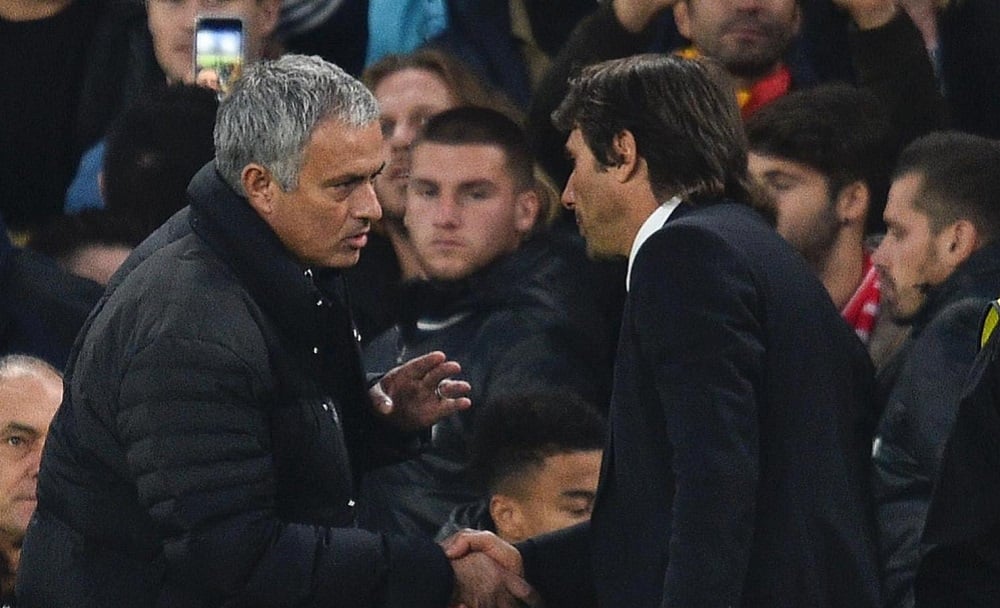 It’s the FA Cup this weekend! Alas, with Jose Mourinho’s ‘pragmatic’ approach likely to strangle the life out of proceedings, we’re not exactly anticipating a classic on Saturday. If it’s a toss-up between watching Mourinho’s United or spending an afternoon grouting the bathroom tiles, the DIY could well win out in the thrill stakes.

Perhaps the best we can hope for is an outbreak of simmering hostility between the two managers on the touchline. Mou and Antonio Conte have been at loggerheads previously this season, the Manchester United manager referring to Conte’s hair transplant and his match-fixing court case when he coached Juventus (the Italian was exonerated), with Conte responding that Mourinho was ‘senile’.

Plenty of needle then – but will that translate into a captivating spectacle on the pitch? We have our doubts. In any case, if you’re hankering for less yakking and more tackling, here’s four times when the FA Cup really did live up to the hype. 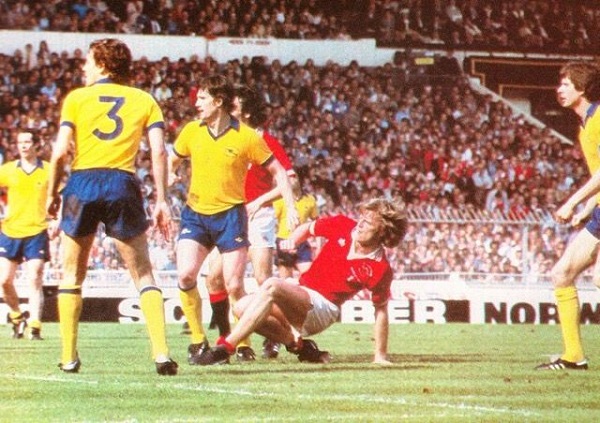 A fairly one-sided contest for much of the match, this game burst into life in the final five minutes. Before that, Arsenal had taken an early lead through Brian Talbot, before Frank Stapleton doubled the lead for the Gunners shortly before half-time.

When the second half got underway, United were kept at bay until the 86th minute, when Gordon McQueen seized upon a chance from a set piece to drag United back into the game at 2-1. Two minutes later, Sammy McIlroy evaded David O’Leary and keeper Pat Jennings to level the scores and dumbfound Arsenal manager Terry Neill.

Yet the shocks weren’t over – just one minute later, Alan Sunderland scored from Graham Rix’s cross to give Arsenal the lead again, cruelly putting the kibosh on United’s brief revival. 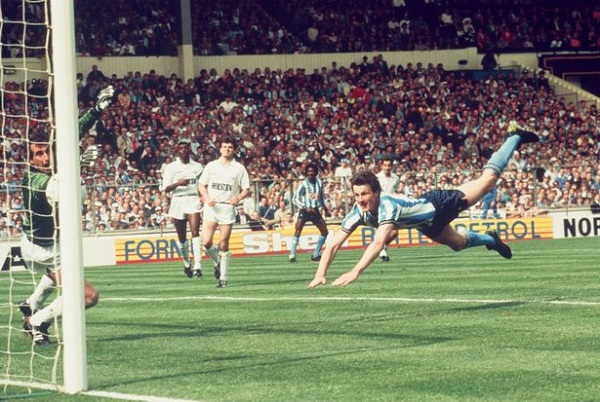 In Coventry’s first and only FA Cup final, the Sky Blues put in a memorable performance to overcome their more glamourous opponents Tottenham. The north London side had won the Cup on seven previous occasions – two of which had come in the preceding seven years.

All of which goes to show that history only gets you so far. Still, the game started well for Spurs; Clive Allen scored after just two minutes (his 49th goal of the season!), but Dave Bennett equalised for Coventry in the 8th minute to restore parity.

Tottenham’s Gary Mabbutt put the Londoners ahead once more in the 40th minute, but in the second half Keith Houchen scored from a diving header to equalise from six yards out – and the BBC would go on to name Houchen’s contribution the goal of the season.

With the deadlock unbroken in the regulation 90 minutes, the contest was settled in extra time in unfortunate style for Mabbutt – a ball from Lloyd McGrath was deflected off Mabbutt’s knee and into the back of the net, settling the game 3-2 in Coventry’s favour. That own goal gave the Midlands side their greatest ever moment in football, at least to date… 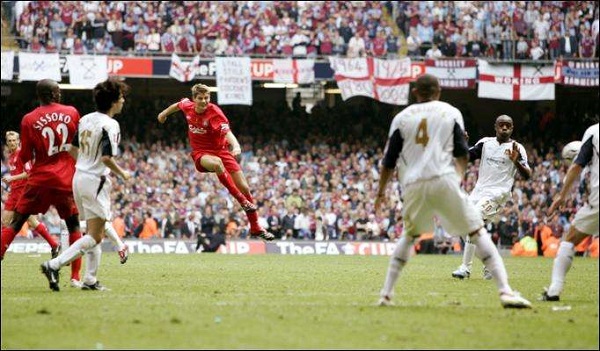 Liverpool were looking to win the Cup for a seventh time, while the Hammers were hoping to win the event for the first time in 26 years, having previously won in 1964, ’75 and ’80. Played at Cardiff’s Millennium Stadium in front of a crowd of 71,140, West Ham were able to take the initiative thanks to an own goal from Jamie Carragher in the 21st minute.

Dean Ashton scored a second for the East London side seven minutes later, reacting quickly  to goalkeeper Pepe Reina’s fumble. Yet this was the Liverpool side that had come back from a 3-0 score line against AC Milan in the Champions League final a year earlier. Rafa Benitez’s side rallied again here, Peter Crouch scoring a disallowed goal in the 30th minute, before Djibril Cissé found the net a few minutes later.

In the second half, Steven Gerrard would level the scores, smashing home a volley in the 54th minute, before defender Paul Konchesky put West Ham into the lead once again 10 minutes later with a fortuitous cross that ended in the back of the net. As the clock ticked down, Konchesky’s brilliantly misplaced effort began to look decisive – until Gerrard saved Liverpool’s bacon (not for the first time), in injury time scoring a thunderous volley from some 35 yards to force extra time. The goal was subsequently named the best to be scored in the last 50 years of FA Cup finals.

With neither of the two sides unable to steal ahead in extra time, the game came down to penalties, with Didi Hamann, Gerrard and John Arne Riise all scoring to beat Alan Pardew’s side 3-1 on penalties. 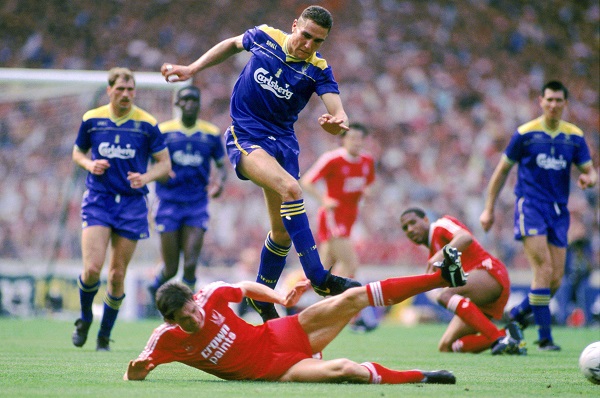 Liverpool dominated English football in the 1980s, but this was one occasion when the Merseyside team didn’t have things all their own way. While Liverpool’s attacking style favoured an easy-on-the-eye approach, Wimbledon favoured a more route 1 style approach, long balls, hit-‘em-and-hope tactics, plus the fairly artless skulduggery of the likes of Vinnie Jones who, let’s face it, was a pretty horrible piece of work.

Still, Wimbledon’s approach could undeniably be effective. In front of a Wembley crowd of 98,203, manager Bobby Gould masterminded a victory for the underdog, courtesy in large part to Lawrie Sanchez’s 37th minute header.

The match itself was perhaps not the most amazing you’ll ever see, but the result makes it one to remember – and it’s also worth taking note that Wimbledon keeper Dave Beasant made history here by making the first ever penalty save in an FA Cup final, denying John Aldridge. On the final whistle, BBC commentator John Motson famously quipped ‘the Crazy Gang have beaten the Culture Club!’

Bet on the FA Cup here. If you’re looking for a different kind of flutter, check out our 32Red Casino site – there’s plenty of slots and table games to keep you entertained!