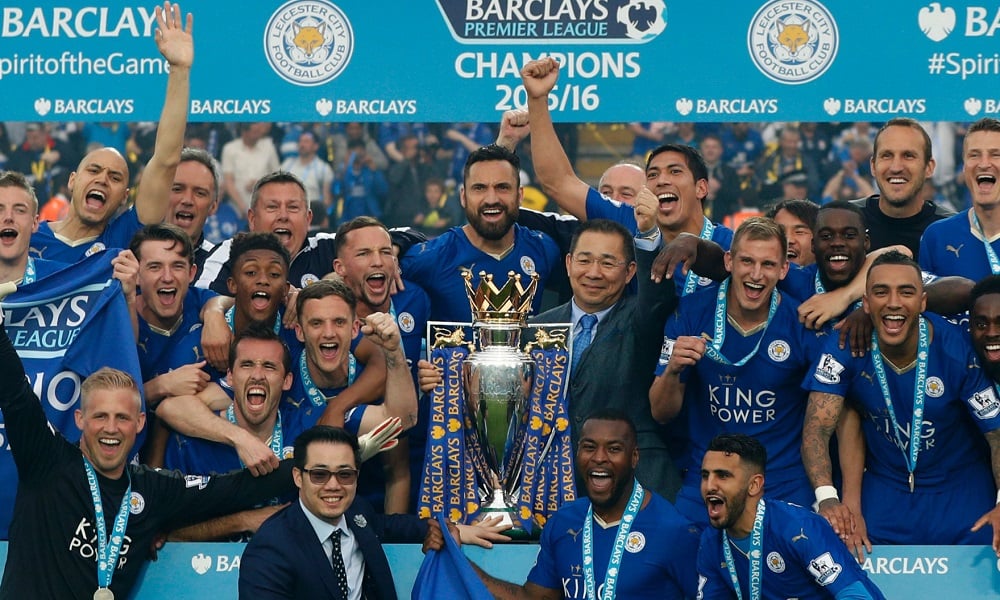 Sporting shocks that will stun you

Sporting shocks have the power to make the whole world sit up and take notice. Anthony Joshua’s recent defeat to Andy Ruiz Jr was a timely reminder that even the biggest events don’t always follow the expected script.

AJ was a huge favourite when he faced the Mexican American fighter at New York’s Madison Square Garden earlier this month. Yet the Londoner was beaten by technical knockout in the seventh round, with the previously unheralded Ruiz now ranked as the world’s best active heavyweight by some experts.

Here are four more of the most incredible shocks in sporting history. 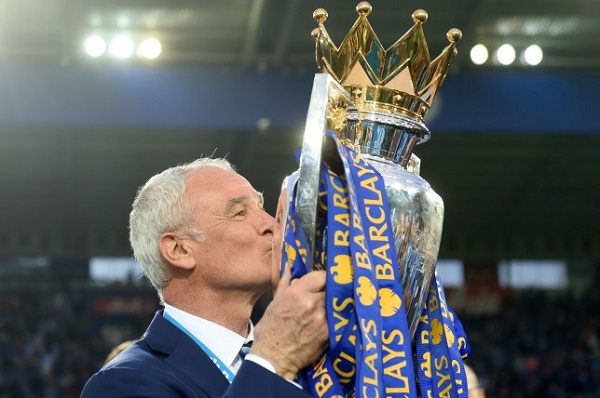 To say that Leicester were unfancied to win the Premier League in the 2015/16 season barely covers it. Leicester have never been fancied to win the Premier League. In 2015, with the newly installed manager Claudio Ranieri prompting one of my colleagues to lump on the side for relegation the idea that the Foxes could even mount a serious challenge for the Prem seemed farcical.

And small wonder. Leicester had flirted with relegation in the previous season, with then manager Nigel Pearson eventually steering the side to 14th – only to lose his job after some of his players (including his own son) disgraced the club during a post-season holiday to Thailand.

Even with the promise of the fresh start which Ranieri promised, the omens weren’t auspicious. The Italian had endured a series of setbacks in his managerial career since he’d last managed in the Premier League at Chelsea more than a decade earlier, with ultimately disappointing spells at Juventus, Roma and Inter; his most recent coaching role before his switch to Leicester was at Greece, where Ranieri was dismissed after the nation lost to the Faroe Islands.

Yet with rival Premier League clubs like Chelsea, Man Utd and Man City all in transitional phases, and Leicester available at odds of 5000/1 to win the title, the unfashionable Midlands club went on an almighty tear, losing just three league games all season.

The club finished 10 points clear of nearest challenger Arsenal to become top flight champions for the first time in their history, with the likes of Jamie Vardy and N’Golo Kante elevating their reputations in the process. Vardy would score in 11 consecutive games – a PL record – while Kante was judged so crucial to the Foxes glory, he would immediately be purchased by Chelsea, who themselves went on to win the league the following year.

Alas, for Ranieri his time at Leicester would end on a sour note; perhaps inevitably, the club would struggle to match the achievements of the previous campaign, and with the Foxes again sliding dangerously close towards relegation, the coach would be sacked in 2017. Still, at least Claudio (and every Leicester fan) will always have that glorious first season. 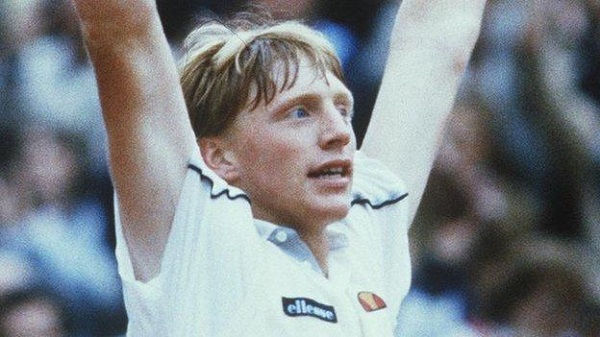 In recent years Boris Becker has made headlines primarily for dubious reasons – like apparently trying to get out of a bankruptcy obligation with a spurious claim to diplomatic immunity, when Becker claimed he was an official diplomat for the Central African Republic.

Boris isn’t much when it comes to business, it seems. But even if he’s made some iffy decisions away from the tennis courts, it’s difficult to explain just what an impact this redheaded German teenager made when he won Wimbledon as a callow youth. Becker defeated South Africa’s Kevin Curran in four sets in the final, announcing his arrival on the tennis scene aged just 17.

The player would be no one-hit wonder, landing a total of six grand slams in a fine career. Yet it was Becker’s first great success in London that endeared him to the watching world – and defines him even now. Becker was the first German to win Wimbledon, the first unseeded player to win the tournament – and one of the most popular players in the history of the sport. 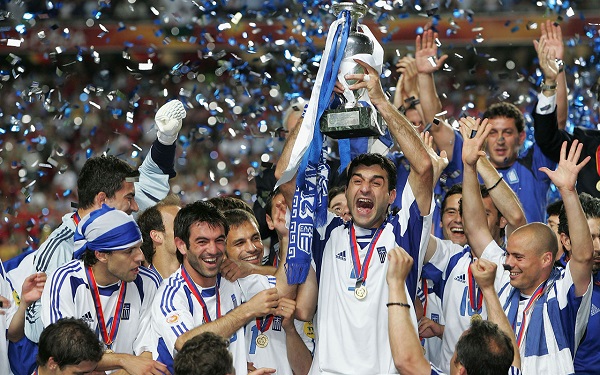 This one is arguably a rare bum note in the pantheon of sporting shocks – even if the nation of Greece would strenuously disagree. Hardly a powerhouse of world football, Greece won the 2004 Euros through a blend of fortune and pragmatism, their head coach Otto Rehhagel prizing fitness and defensive solidity over more aesthetically attractive fare. Hey, it worked.

Greece had never before won a major tournament, but with the likes of big hitters Germany, Italy and Spain all going out in the group stages, the stage was set for an upset.

Portugal and England would tussle, with the Portuguese side coming out on top to make it all the way to the final – where they faced the same well-drilled but technically less proficient side that had nevertheless beaten them in the opening game of this competition.

If Cristiano Ronaldo and co had been expecting revenge, though, they were disappointed; Greece won the final by the only goal of the game, as they had done in both the quarter and semi-finals. 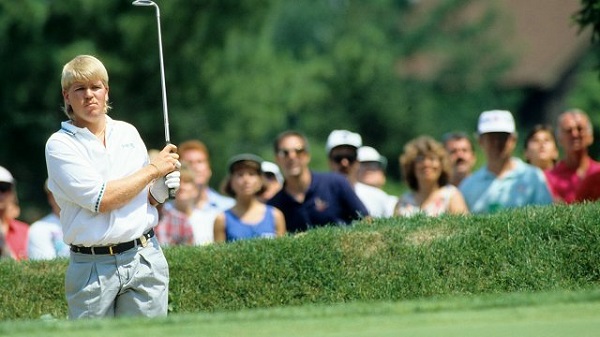 These days he might be better known as the wacky guy with the crazy trousers who takes a golf cart round the course before heading off to Hooters to sign some merchandise for the fans (to buy). But look beyond John Daly’s recent antics and focus on his greatest sporting achievements, and it’s impossible not to be a little impressed.

Daly’s 1991 PGA Championship win seems less like something that happened and more like the blueprint of some endearing but impossible Hollywood tale of the underdog having his way.

The venue for this implausible triumph was the Crooked Stick layout in Illinois, and that Daly even started the tournament is near miraculous. Initially ninth on the list of reserves, with several players unable to take part, Daly was contacted the day before the tournament began to be told he had been promoted to first reserve.

Still not guaranteed a start, he drove through the night for eight hours in order to (possibly) contend – where he learned that with Nick Price dropping out to attend the birth of his son, Daly was in.

There was no time for a practice round, but Daly wasn’t phased; the then 25-year-old American shot rounds of 69, 67, 69 and 71 to win the tournament by three strokes. This major victory was also Daly’s first on the PGA Tour; unsurprisingly it caught the attention of millions watching around the world.

Since then John has also won the ’95 Open – and while it’s amusing to dwell on his fondness for an on-course cigarette and a haircut that wouldn’t look out of place on Rab C Nesbitt’s son, there are countless golfers with far better reputations than Long John who have never won a single major…