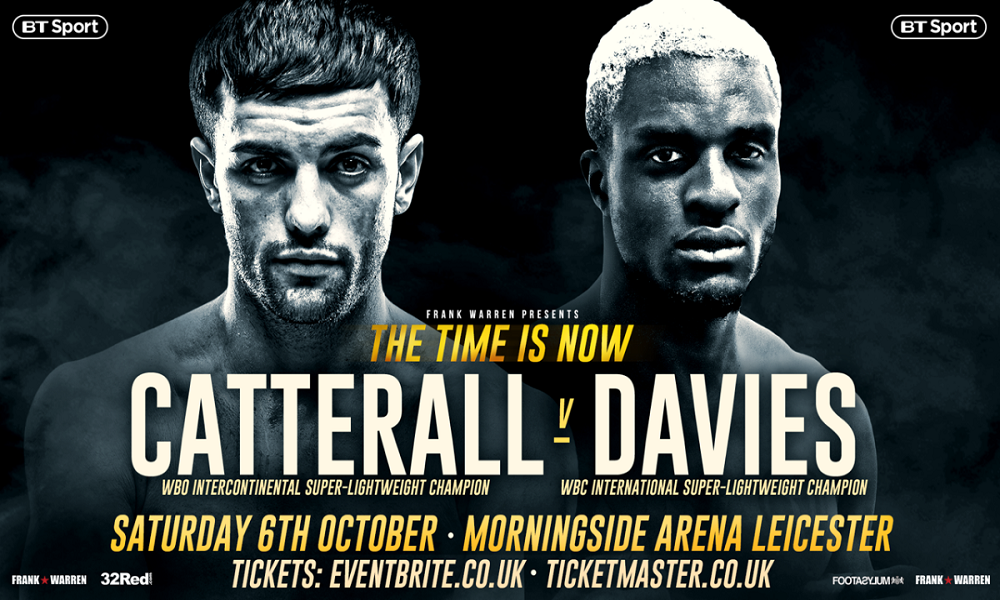 Jack Catterall on Ohara Davies: It’s my turn to carry the torch

Jack Catterall takes on Ohara Davies at Leicester’s Morningside Arena on Saturday night. Ahead of the fight, Jack shares this exclusive fight diary for an unbeatable insight into his preparation for Saturday’s clash.

I’m looking forward to this one. I can’t wait to get stuck in now. Fight week can be boring and I just wanna get it over with and fight. I know I’m gonna have events to do in Leicester and although I like my home comforts and I like coming home at night, it’s all part of the sport. Find the latest odds for Saturday’s fight here.

I seem to have been talking about Ohara Davies for a long time. Even before my last fight people were talking about me fighting him. It was the same before the Tyrone Nurse fight last year. People spoke about that for ages and ages but it’s a thing of the past now.

Ohara’s done me a few favours really. He grips people’s attention for the wrong reasons but for this fight he’s grabbed attention in the right way. It’s done me a favour and the fight has got a bit more attention than normal.

He’s a boxer, not just a character, and he knows he has a hard fight ahead. I’ve always said that I respect any boxer but I just think he’s a mixed up person. I have no hatred for him. I don’t think he’s a nasty person.

He’s said some nasty things – not directly to me – and said some other bad things but I just think he’s mixed up in himself. When everything is said and done, it’s all quite simple. He’s a mixed up person, we’re gonna have a fight and there will be no hard feelings afterwards.

I know Ohara isn’t the most popular bloke but nobody in the gym has said anything nasty about him or mentioned that they hope I smash him up. It’s all business for us. Everything has been about helping me prepare by working on things that are going to work for me in the fight. Everybody has been dead positive in pushing me on and doing everything they can to help me out in the gym.

Me and Tommy Coyle have been helping each other out. He was due to fight a southpaw in America in a few weeks so throughout camp we’ve done a few rounds together. It’s been good. I’ve had quite a few different sparring partners – all British – and I finished up my sparring late last week with Mason Cartwright. He’s big, strong enough and solid for sparring.

The gym is on the up. Everybody across the country can see that and a few of the lads have had big nights recently. I believe success breeds success and I’m in the right hands with Jamie Moore and Nigel Travis. I’ve trained very hard.

I’ve been in the gym with fighters like Carl Frampton, Martin Murray and Rocky Fielding and I’ve seen everything they’ve gone through. I’ve witnessed their training camps, how they dealt with fight week but most importantly I’ve witnessed some big wins. On October 6th it’s my turn to carry the torch and then I’ll pass it on to somebody who’s fighting next.

Find 32Red’s latest boxing odds here. If you’re still up for a flutter, be sure to check out our award-winning casino too!

32Red renews deal to sponsor Frank Warren’s Shows
Daniel Dubois: I feel so well prepared going in to this fight