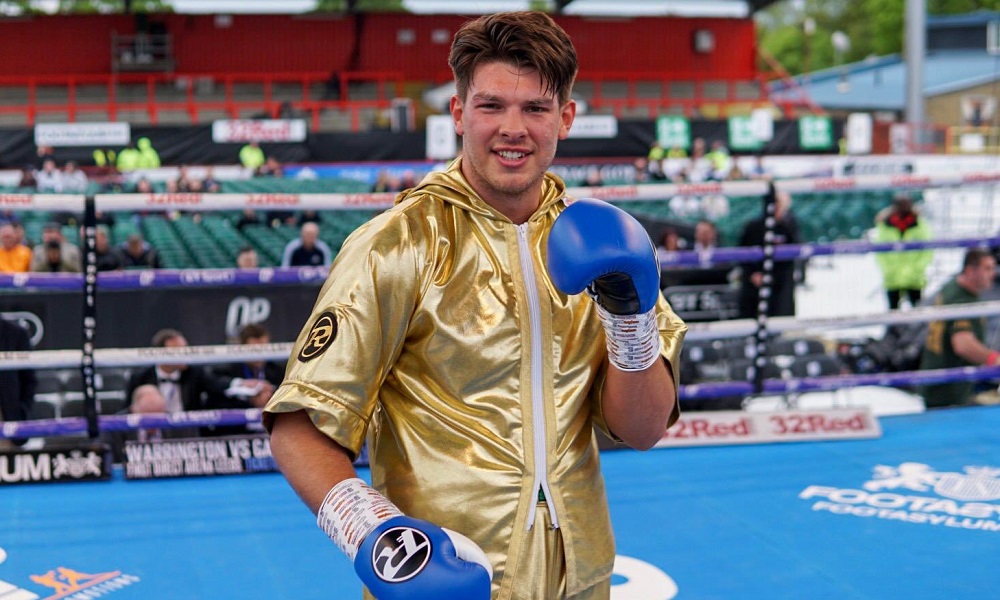 With the imposing O2 Arena sitting across the River Thames and the London Excel Arena just a mile east, whether they walk, drive, or take the bus, fighters arriving for another day’s work at the Peacock Gym are surrounded by reminders of what the future may hold.

The landmarks quickly disappear from view and the fighters descend beneath a Canning Town overpass and through the doors of the the East London institution. Any daydreams are used to push them through another gruelling session.

From Johnny Tapia to Floyd Mayweather, some of the sport’s most talented and glamorous names have used the Peacock Gym but it remains the type of place where nothing is given and everything must be earned.

On Friday night, two of The Peacock’s brightest prospects take the latest steps towards the bright lights. James Branch (pictured) and Chris Bourke both possess all the the relevant tools needed to make it to the top but neither will have the red carpet rolled out for them. On Saturday night they take the tradesman’s entrance to the big time when they duck between the ropes at the York Hall, live on BT Sport. For all the latest fight odds, visit our sportsbook.

Branch (5-0, 1KO) got an early taste of the high life when he made his professional debut under the O2’s famous dome but this will be his first appearance at the spit and sawdust home of British boxing. A naturally talented fighter, Branch is an equally good talker.

“I ain’t bad at both,” Branch laughed. “Everything has gone well since I turned professional. I’m in love with the game at the minute. Touch wood, everything keeps on going as it has so far.

“I’ve been feeling it in sparring. I’ve been getting closer to the weight starting to feel the magic coming back. As you get closer and closer to the fight you get more and more into the zone. The rounds start flying by and you’re getting fitter and fitter. The little moves start coming back and by fight night you’re as sharp as a razor blade. You’re ready to just cut straight through them.”

The 24 year old cruiserweight is a larger than life character and he has attracted plenty of attention since deciding to turn professional last year. He has been given a good promotional push by Queensbury Promotions and the illustrious Boxing News magazine has followed his fledgling career closely. Branch relishes the pressure that the attention brings.

“I like it. I thrive on it. I like the pressure and I think I always perform better when I’m up against it. When all the pressure comes on I’ve noticed that it gets me up for it. When people are doubting me I think, ‘I’m gonna prove you all wrong.’”

If Branch is the armoured tank of the Peacock, Chris Bourke is the quiet assassin. The modern boxing bible – Boxrec – lists Bourke as standing 5ft 4in tall but the 24 year old is actually 5ft 7in, rangy, and very hard hitting. The former Team GB boxer has stopped all four of his professional opponents but Bourke isn’t a crash, bang, wallop merchant. His power is generated by his balance and clever accurate punch selection. A 100% stoppage ratio is an almost unheard of ratio for a British bantamweight.

“Yeah, it’s unusual and the boys I’ve stopped have all been tough boys too,” Bourke said. “I’m 5ft 7in tall and I’ll fight at super bantamweight. I think what separates me is that I’m a big puncher at the weight but I’m not just a brawler, I can box as well. As an amateur I boxed for Team GB for three years but even back then I knew that my style was suited to the pros. I like to take my time and pick my shots. I practice and always try to make sure that when there is an opportunity, I’m in the perfect position to take it.

“I like fan friendly fighters like Arturo Gatti but on the opposite side I like fighters like Pernell Whitaker who are just pure skill. I’m a boxing fan and I try to mix both styles. If Plan A doesn’t work then you have to go to Plan B.”

32Red ambassador Daniel Dubois is currently the Peacock Gym’s leading light and his seemingly unstoppable march towards the top of the heavyweight division should create opportunities for Branch and Bourke to follow in his wake. Both compete in divisions where rapid progress can be made and there is every likelihood that both will be back on BT Sport contesting major titles before the end of 2020. This weekend gives boxing fans the opportunity to see the latest formative steps in their careers.

“Cruiserweight is a very exciting division a the moment,” Branch said. “There are some very good prospects coming through and I’ve got a lot of history with a lot of the champions from the amateurs. With a little bit of luck, 2020 is going to be the year when I make my mark. I’d like another two fights this year and then next year fight for the Southern area title and get the ball rolling.”

Bourke’s opportunities may well come equally as quickly and he is happy to see where his journey takes him. “There has been talk of me moving quickly and my coaches believe in me. I haven’t been pro for a year yet and after this I will have already had five fights. I’ve been fighting pretty much every other month. It’s been perfect and exactly what I wanted.”