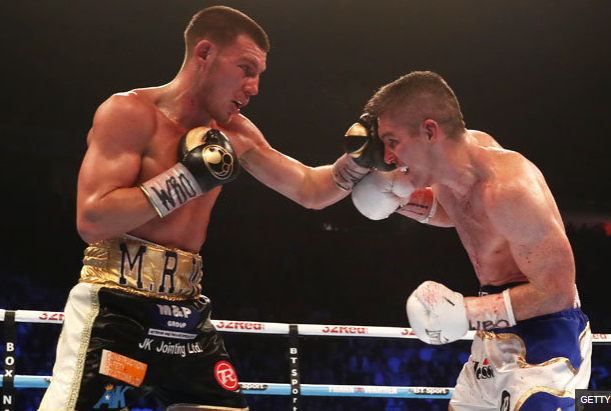 It was a fight of two halves, one clash of heads, and three cuts.

The nine rounds that Liam Williams and Liam Smith shared in April were amongst the most intense seen in a British ring this year.

Already cut, a sickening thud opened up a second, more serious slash over Williams’ right eye. The fight was over. After starting strongly and inflicting a nasty cut over Smith’s eye, the Welshman finished bloodied himself and beaten. The sudden ending prevented the fight from reaching boiling point and the rivalry has simmered ever since.

Officially the 25 year old lost the first fight, but given the way he acquitted himself before the controversial conclusion he has been able to draw plenty of positives from his evenings work ahead of Saturday’s eagerly awaited rematch.

“Last time I knew, well, I personally believed that I was good enough and I obviously proved that to myself and answered all my own questions,” Williams (16-1-1, 11 KO’s) told 32Red. “This time I’m going in a lot more confident. Training has gone perfectly. Everything is good and I’ve no complaints. I’m more than ready and I can only see one outcome.

“I didn’t take any satisfaction at all from the first fight because it ended terribly for me. I did answer questions and ticked boxes that I hadn’t ticked before and I’m sure it’ll only benefit me in this next fight and for future fights.”

Following the first fight, debate about just how the fight would have played out had the pairs heads not violently collided raged almost as intensely as the fight itself. Smith certain that he was in the ascendency and Williams positive that he had more than enough left in the tank to turn back the former WBO junior middleweight champion’s late charge.

“I believe that the truth probably lies in the middle somewhere,” Williams says. “Yeah, he was starting to come on strong but I also easily had nine minutes in me. I could have ran away on the jab and nicked the last few rounds and gone home with the win. It’s just one of those things and to be perfectly honest with you, I don’t really want to talk about any of that any more. It’s all in the past and it’s all negative stuff. It’s a fight I lost and I’m not impressed with keep having to go over it. I want to move forward and I believe I’ll get the win this time.”

As impossible as it would be to preview the rematch without referring to April’s events, it would be equally as hard for Williams and his trainer, Gary Lockett, to prepare without heeding the lessons learnt in the first fight. For six rounds, Williams set out his own blueprint for how to beat Smith. A blistering start and a willingness to put himself in harms way in order to unload his own combinations prevented Smith from getting into his rhythm until the midway point of the contest. There is no need to rip up those well laid plans and go back to the drawing board, a few simple revisions could make all the difference.

“I’m not the type of fighter to sit back, move, and win by landing a few jabs per round. That’s not really my style. I want to make it as action packed as possible, obviously without blowing myself out. In terms of me getting off to a flying start, I think that was probably due to a little bit of inexperience compared to Smith. He’d been in more long distance fights and I do believe he probably paced it better but now that I’ve been through it, that knowledge is only going to favour me in this fight.”

Even the smallest fragment of doubt can wreak havoc with a fighter’s mindset as the weeks, days and hours pass and the first bell approaches. Whether it is subconsciously designed to build confidence in his own chances or an attempt to plant a seed of uncertainty in Williams’ mind, Smith has openly questioned his rival’s heart and mental toughness from the moment the first meeting ended.

“I think it’s a bit of both. He’s obviously trying to say negative things and plant the seed in people’s heads to try to convince them [that he’s right]. He’s got a bully mentality and personality and by him bringing other people down, he takes strength from it. Last time, I believe I showed him too much respect. Not as a fighter – because I still have a lot of respect for him – but in person I believe I showed him too much respect and didn’t give him anything back. This time, there’s no respect. I don’t give a fu*k what he thinks or says. I don’t like him and i just want to punch his head in.”

Fighting on pure emotion or investing too much energy in in pre-fight antics are unlikely to serve Williams well and he absorbed enough from the first encounter to know that he must retain a cool head if he is to emerge from the pair’s protracted conflict on November 11th.

Liam Smith exclusive interview: Ask anybody around me they’ll tell you that I’m 100% on it this time…
Smith v Williams – No ifs, no buts betting preview