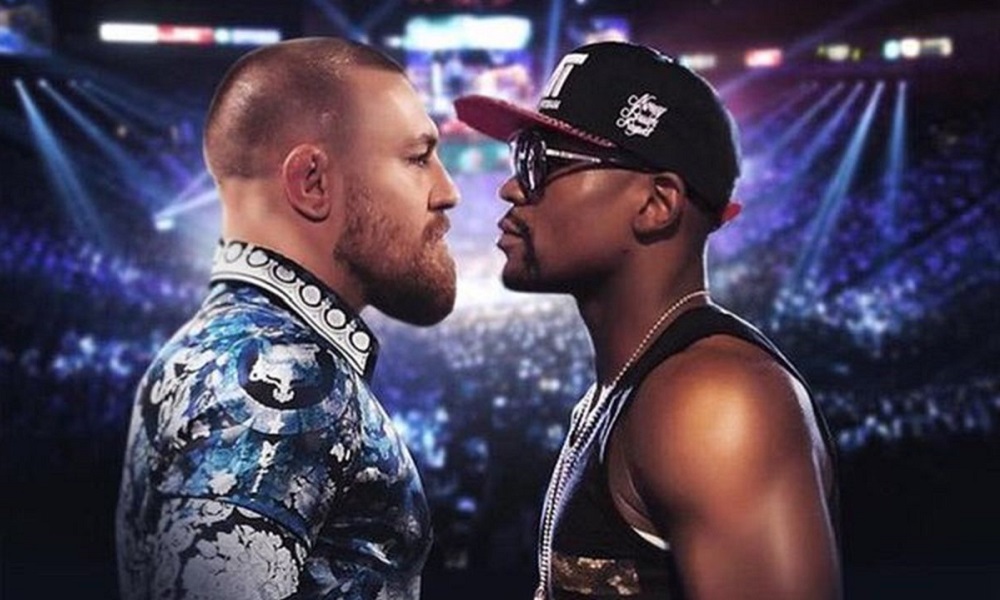 If you’re a hardcore boxing or UFC fan, your opinion of the #MayMac fight has probably followed a similar path to mine. Fight announcement, complete disdain… only morons would help fund such a blatant money grab. Press conference, annoyance… this WWE rip-off is overshadowing genuinely competitive and meaningful fights, what about Cormier v Jones? Or GGG v Canelo? That’s what people should be talking about! The last few days, sod it… everyone else will be watching so I may as well too. It’ll be a mismatch, but at least the circus surrounding it will be entertaining.

While my inability to take a firm moral stance in avoiding the fight is not shocking, to be looking at odds of 1/4 Mayweather and 13/4 McGregor is quite frankly astonishing. From Ricky Hatton onwards, Floyd Mayweather has faced 11 men, with 435 wins and 126 world title fights behind them. None of them have beaten him. None have come close. Yet a fighter who has yet to make his professional debut and has no significant amateur pedigree, apparently has a greater chance of victory than Miguel Cotto, Juan Manuel Marquez and Shane Mosley? I suppose that trio only had a measly 52 world title fights between them before facing Mayweather. 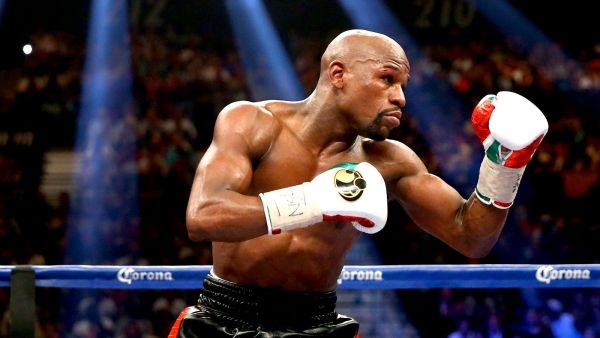 The most eloquent explanation of the current odds comes from a fight brain far superior to my own, but possibly not one you’ll all be familiar with, former boxing manager, Charles Farrell. In his words:

“insane misperceptions that impact the betting line almost always center on either the sentimentalization of an icon or an intense identification with a fighter based on nationalistic, cultural, or racial grounds.”

This is inarguable with McGregor, whose army of supporters, whether proud Irish, or simply UFC fans who’d love to see their combat sport gain its most public victory over boxing, have clearly driven down his price with loyalty bets since the date was set. 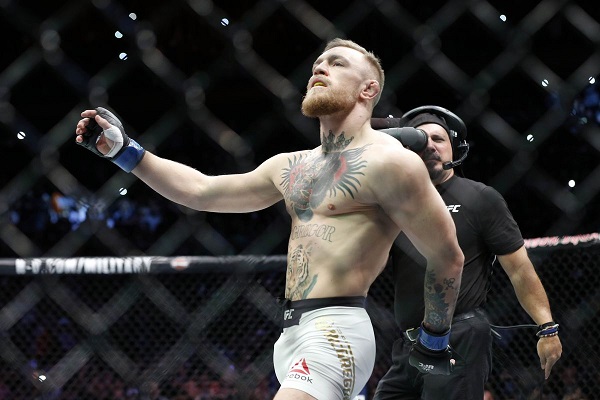 In normal circumstances, backing Mayweather to win would be the obvious bet. It probably still should be, but personally I just can’t fully trust what I’m seeing enough to be backing a 1/4 shot at high stakes. When the pair can happily share a private jet to London, but then suddenly turn on the animosity when the Wembley Arena crowd have filled their seats, there’s almost certainly some collusion between them.

Apropos of nothing, the aforementioned Charles Farrell’s notoriety in boxing is in part driven by the openness with which he speaks about his previous role fixing fights.

So my advice for Saturday? Don’t take it too seriously. Enjoy the pantomime for what it is – a bit of fun. I fully expect the bout itself to be uncompetitive and ugly viewing and given there’s a good chance you’ll feel short changed by the PPV fee, a contentious outcome is the last thing you’ll need to add to that pain at 5.30am Sunday morning. If you do fancy a bet to keep it interesting, then why not dip into one of the specials at 32Red Sport. My pick of the bunch would be:

Either corner to throw in the towel at 4/1

Assuming everything is above board, my prediction is for a Mayweather stoppage between rounds 7-12. (currently available at 9/4) Regardless of how hard McGregor has trained in the lead up to this fight, there is nothing he can have done to prepare him for the mental fatigue that facing a defensive genius like Mayweather poses. (No disrespect Paulie Malignaggi, but when Sam Eggington is making light work of you, you’re not adequate preparation for the best fighter of his generation). After six rounds of jabs landing short and continuously finding himself hitting fresh air, I could easily see Conor start to run out of gas and Mayweather begin to land at will. This is exactly what happened with the much more experienced and technically sound Canelo Alvarez during their 2013 bout and there were times when this elite level fighter was visibly close to calling it a day.

Given all the words that have been exchanged, don’t be surprised to see Conor’s corner throw in the towel when the going gets tough. This way they’ll avoid their man having to be seen flat out on the canvas or, even worse, quitting himself.

Either fighter to be deducted a point at 2/1

Ignore all the nonsense of McGregor losing his temper and deciding to throw in some kicks or a take-down attempt, there’s a much more plausible reason why a point could be deducted from either man on the night. Conor McGregor is (incorrectly in my humble opinion) given a chance of success because of his ability to ‘quickly cover distance when he throws his power shot’ – his left hand.

In UFC terms, that means he can effectively move from out of range to landing a shot flush on his opponent and it’s obviously worked in the octagon. However, in boxing, this is simply falling-in after you throw a punch and is, in short, just shoddy technique. It will result in either Mayweather picking him off as he tries to throw a shot from too far out, or a succession of ugly clinches as his momentum carries him into Mayweather. The latter is highly likely to result in a miserable spectacle and this is when a deduction becomes probable.

McGregor’s natural urge will be to push Mayweather down in a clinch – a foul. Mayweather is not shy, or inexperienced in using his elbows and forearms to protect himself up close – also a foul. Don’t be at all surprised to see some early warnings and ultimately a deduction or two as the fight progresses.

If history tells us one thing about Mayweather, it’s that the win is far more important to him than putting on a show. McGregor’s only chance of success is with a lucky punch and inevitably that means at some point he’ll have to go for broke. It wouldn’t come as a shock to see Mayweather allow McGregor to empty the tank in the early rounds in pursuit of that stoppage, supremely confident in his own defensive skill and safe in the knowledge ‘The Notorious’ will pay for his exertions in the later rounds. Floyd’s interest is always in the ‘W’ and if he can increase his chances of that by handing an early round to McGregor on aggression, then he’ll be absolutely fine with that.

If you also fancy a flutter on the undercard, then I have a treble to keep you awake through the early hours. Badou Jack and Nathan Cleverly is a genuinely intriguing supporting bout and while Cleverly’s work rate should make for an interesting fight early on, Jack, without the burden of making super-middleweight, should have too much for him. Neither are massive punchers and the safe pick would be Jack to win on points at 7/10.

In contrast, Floyd’s star in the making Gervonta Davis can dig and I’ll be backing him to stop his opponent Francisco Fonseca inside the first 6 rounds at 7/20. To be honest, I don’t know much about Fonseca… if you’ve trawled the internet in search of Costa Rican boxing video to find footage of him plying his trade, then you’re more dedicated than me. What I’m fairly certain of is that Mayweather’s matchmakers will be aware of what they’re bringing over and he’ll have been hand-picked to make their future star look as good as possible on the big stage.

Completing the set is Andrew Tabiti to beat Steve Cunningham at 7/20. Cunningham is a fighter you want to see do well and one who’s taken tough fights and got rougher decisions throughout his career. Unfortunately, his days at the top-level are done and the reality is he’s also been selected to help introduce Tabiti to a large audience. Cunningham isn’t one to lie down, so this could well go the distance, but Tabiti should be too fresh for the 41 year old.

A Badou Jack points, Gervonta Davis 1-6 KO and Tabiti win treble currently pays 2.18/1. It may not make you Money Mayweather rich, but it can hopefully cover the cost of the PPV.

Floyd Mayweather fights Conor McGregor this weekend from Las Vegas – see the latest odds here. And for a wide range of boxing markets, check out 32Red Sport here. If you’re up for a flutter on table games or the slots, be sure to check out our award-winning casino too!