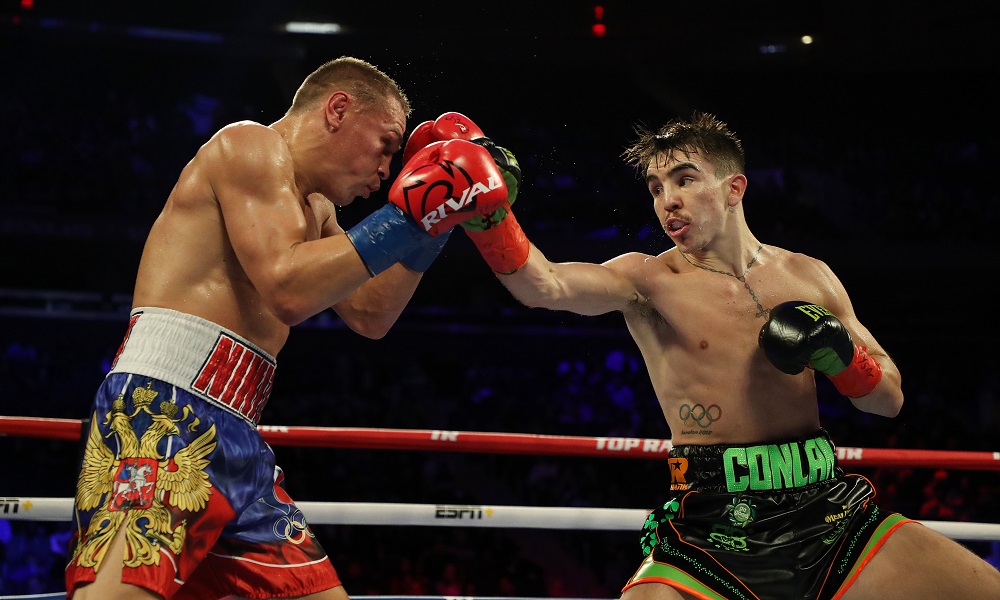 Happy in his new weight division, happy in his own skin, happy with training and happy with the way his career is shaping up, Michael Conlan has never been more settled.

The only thing missing is a world title belt but the undefeated Irishman can even take a massive step closer to that goal this weekend. He fights Ionut Baluta in what amounts to a world title final eliminator. For all the latest fight odds, visit our sportsbook.

Win and he can expect to be mixing with one of the super bantamweight champions before the end of the year. Conlan has never been closer to achieving his goals but it is a position he always knew he would one day find himself in. In some ways it feels like business as usual.

“It is indeed,” Conlan told 32Red. “Although I think the only thing I feel differently about this time is that I’m gonna KO this guy. I’m gonna knock him clean out.”

Baluta is on a six fight-winning streak and in the form of his life after beating two of Conlan’s countrymen. He looked like a heavy handed wrecking machine when dispatching David Oliver Joyce last September and Conlan (14-0, 8 KO’s) can expect Baluta to happily meet fire with fire. It might be expected that the common sense approach would be for Conlan to use the boxing ability which earned him a host of amateur accolades, avoid unnecessary risks and take a safety first approach to matters but Conlan has a more definitive outcome in mind. He wants to announce himself at super bantamweight and make an example of Baluta.

“I’ve been training with that in mind. I feel like I’m punching a lot harder,” Conlan said. “Whether that’s with coming down to the 122lb division or whether my technique has got better because we’ve been working on that too, I’m not sure. I’m not gonna go and hunt for it but it’s gonna happen. I can see me doing it with a left hook, I can see myself doing him to the body. There are so many ways I can hurt this guy but I believe I can get him with a big shot.

“I’m not underestimating him. He’s just beaten two Irish guys in a row, good fighters too. T.J Doheny is a former world champion and David Oliver Joyce is a former Olympian. They’re two good victories and he’s riding a wheel of confidence because he’s just beaten some serious f****ng fighters. He’s gonna be trying to take my head off. I just believe that this guy is gonna bring the best out of me and make me look really good. 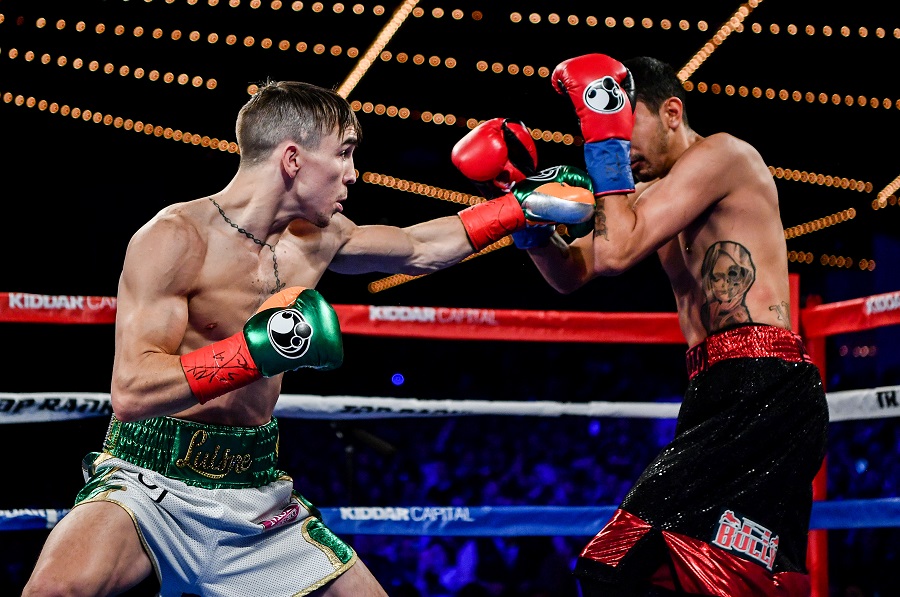 “Maybe it’s that confidence and believing in himself more is bringing out that power. His confidence will be his own downfall.”

It is just over four years since Conlan turned professional in a blaze of publicity. He has always held ambitions of becoming a multi-weight world champion but initially set his sights on beginning his quest at featherweight. With time and experience, he realised that he could take his frame down to super bantamweight. Considering the new lease of life the move down has given him and the power he can feel coursing though him at the new lower weight, is there a twinge of regret that he didn’t make the decision earlier?

“There’s no point in regretting anything, it’s life,” he said. “Maybe I could have done this from the start and I might be further along but it’s life. It’s done and I can’t change that. I’ve done what I’ve done, had the fights that I’ve had and earned what I’ve earned and you won’t get me complaining. I’m in a fantastic position in life, in sport and in general. I’m in a really good place and I’m excited for what to come. I’m only 29 and in the pro game I’m a baby. There’s not a lot of miles on my clock.

“I’ve made the weight better than I ever even made featherweight. The lower I came down the stronger I felt. That’s no word of a lie. I’m excited about how much of a beast and monster I’m gonna be at this weight.”

Conlan certainly looked like a monster in a recent photo posted on social media. If appearances are to believed, his new rivals at super bantamweight might have to worry about more than Conlan’s boxing ability. 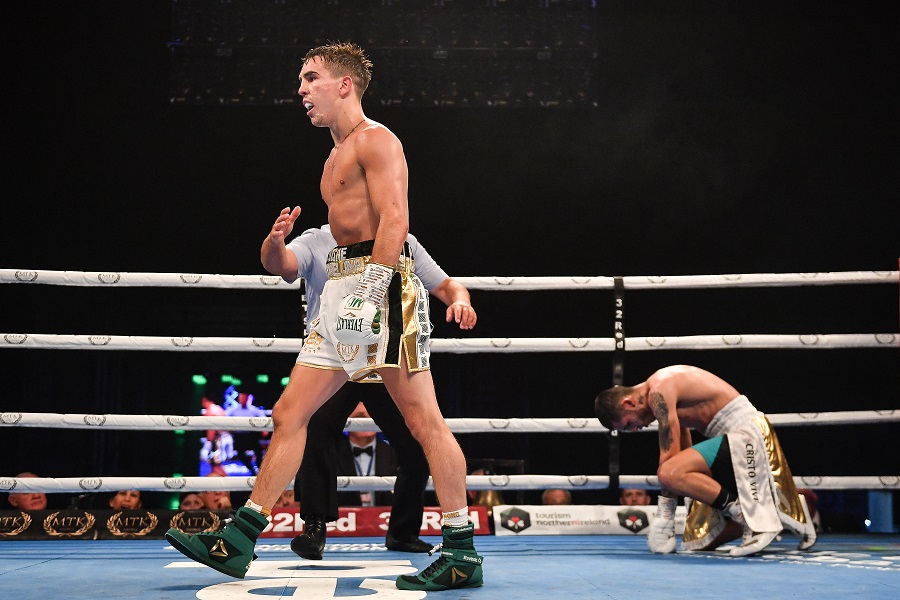 “I’d just finished sparring and boxing work so I hadn’t done any squats or anything. I’m probably 8 or 9% body fat and every part of me is ripped. That doesn’t mean anything but it just shows the condition and physicality I have at the moment. It’s probably the best of my whole career.”

Not that the other champions will lose too much sleep. Get past Baluta and Conlan will soon be mixing with like-minded confident operators who spend more time worrying about themselves than their opponents. Just the type of fighters who will bring out the very best in him. Stephen Fulton holds the WBO belt and impressed during a spell in Manchester sparring Carl Frampton, WBC champion Luis Nery has had his issues outside the ring but remains a fearsome prospect inside it and Conlan has first hand experience of unified WBA and IBF boss, Murodjon Akhmadaliev.

“I beat Akhmadaliev in the world final. It’s a fight I would love to have. Fantastic fighter. Ramrod jab and sharp explosive puncher. I know that first hand.

“I still believe I’ll fight Fulton or Nery this year. After this fight I’ll put it to Fulton. Come on, fight me. Let’s go in August. If he goes on and fights the winner of Nery and Brandon Figueroa I’ll fight the winner and it could be for both belts. There’s no point in thinking that far ahead but when I do let myself, I end up thinking this could work out even better for me.

Frank Warren exclusive: thoughts on Bentley vs Cash and more
Sunny Edwards exclusive: You’ve gotta back up what you say!