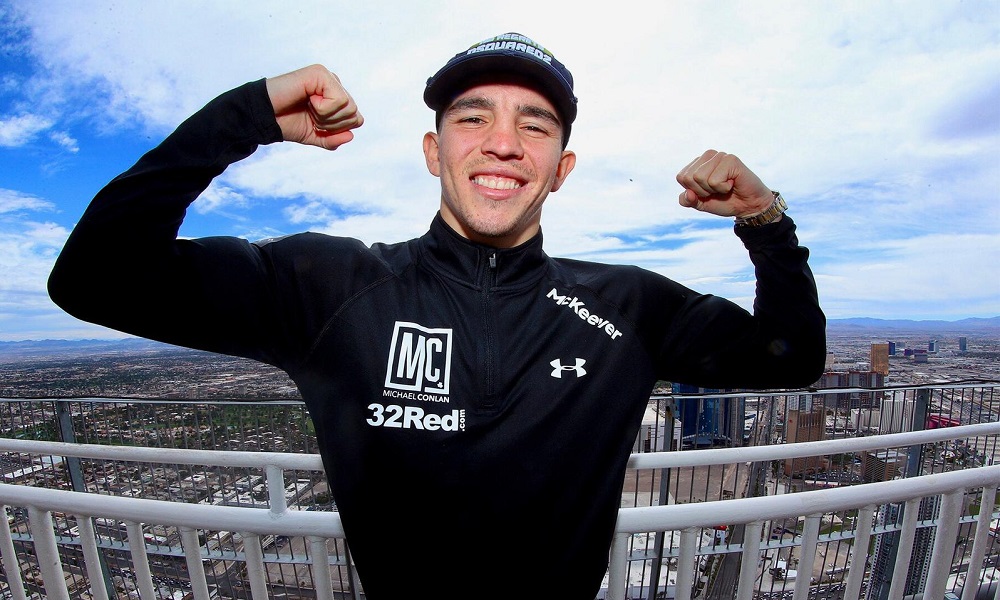 Boxing is a sport that requires its participants to deprive themselves of many of the good things in life but although the tale of the lonely warrior locking himself away from the world and preparing in isolation is one of the sport’s most well used stories, it isn’t a role that every fighter benefits from playing. Michael Conlan has realised that home comforts sharpen his edge rather than soften it. For all our latest boxing odds click here.

Conlan’s fiancée, Shauna, recently gave birth to their second child – Michael Jnr – and the experiences of his first eighteen months as a professional boxer have helped the 26 year old featherweight work out exactly what it is that makes him tick.

“He’s getting big, really fast and it’s unfortunate that I’m going to be in training camp for the next while because I’m missing him growing up,” the 32Red ambassador said. “I wasn’t really going home much in camp before and it was hard with just one child, let alone two, so I’ve decided I’ll go home every second weekend.

Me and Adam [Booth, his trainer] sat down and talked about it and it’s all about being happy. This is actually the best I’ve felt in training camp in terms of my mental state. I feel in really good form and it’s showing in all the sparring and training.

“Going home doesn’t make you any less hungry to win fights. In fact, it shows you what you’re doing it for. Listen, everybody is different. Some people might need solitude and time away by themselves to maybe try to prove to themselves why they’re doing it.”

Conlan (8-0, 5 KO’s) was swept through his first year as a professional on a wave of enthusiasm and support but began to realise that he needed to begin using his brain rather than brawn if he was to fulfil his potential. This new way of thinking ties in with his cooler in-ring demeanour.

“You know that: ‘I’m alone, I’m away from my family and somebody has to pay’ attitude. If you’re going in there with a ‘somebody must pay’ attitude, you’re never going to box to the best of your ability. You don’t box on anger, you box using skill and your brain. When I hear somebody say all that stuff I think: ‘Oh, right. So somebody has to pay? I know what you mean, but you probably aren’t going to go in there and fight like that so you probably shouldn’t bother saying it.’

“I’ve said it myself in the past but when I’m alone I’ve thought about this – these are the kind of things that come through my head when I’m sat by myself – and that’s not something you should actually say. That’s backward thinking. Like I said, everybody is different but I think the way I’ve gone is working for me.”

Conlan isn’t your usual novice professional. He has had to learn the ropes whilst maintaining his place at the forefront of Top Rank’s next generation of stars. The hectic routine of his first full year as a professional inevitably took its toll on Conlan’s body but physical aches and pains pale compared to the strain the heavy schedule placed on the mind.

Over the course of 18 months, Conlan traded the Irish amateur set up for the brutal reality of life as a professional in Los Angeles and then switched from California to Adam Booth’s stable just outside London. He boxed 35 rounds on three continents and fought in front of rabid crowds in Madison Square Garden and the SSE Arena in Belfast.

The chaotic start to Conlan’s professional career may fit perfectly with the wildchild reputation he was tarred with following his infamous middle finger salute at the 2016 Olympics but in reality, the 26 year old is entering the second part of his career relaxed and rejuvenated after a month away from the sport and with his family and training team providing him with the most solid of foundations.

“I was talking about this with Shauna,” Conlan said. “She trained with me for a day during my break and was really sore. I said: ‘You know I train every day? Every day my body feels like that for between eight and ten weeks.’ There’s always something that’s sore every single day but you don’t even take that into consideration. I was sat there thinking: ‘F**k. I do go through some hardship don’t I?’ She started laughing. She knows what I go through.

“To be honest, it’s more the mind. It was non-stop and it wasn’t even as if they were small fights. I was headlining at Madison Square Garden. Then I was fighting in Australia. Then I ended up back in Belfast. It was a lot to take in and handle. Even though I have my amateur experience I was still a novice pro.

As an amateur you get the Europeans one year, the Worlds the next year, then the Olympic Games so you have maybe five big events over four years. I’ve had eight pro fights now and they’ve all been big events. Trying to fit that all in and relax is impossible. It all came so fast and thick that a lot of enjoyment was taken out because of the scale of things. It starts to slow down now.

“It was absolutely crazy for the past 18 months. A month or so after my last fight [an eight round decision over Adeilson Dos Santos in June], I started to do my own training but I took a full month of not doing any training. I enjoyed family life and my two kids.

We went away on a big family holiday with my mum and dad, my brother and all the grandkids and it was great. We were together in Portugal in the warm weather and all living together under the same roof. After that I felt like I was ready to get back into the swing of things and I was actually looking forward to putting some hard work in. I wanted to get ready for an opponent and have a target. It was the perfect time off. It was enough time to enjoy the first months with my new baby and the holiday topped it off.”

In part two of Michael Conlan’s exclusive interview, the 32Red ambassador rates his first year as a professional and talks about his Las Vegas debut.