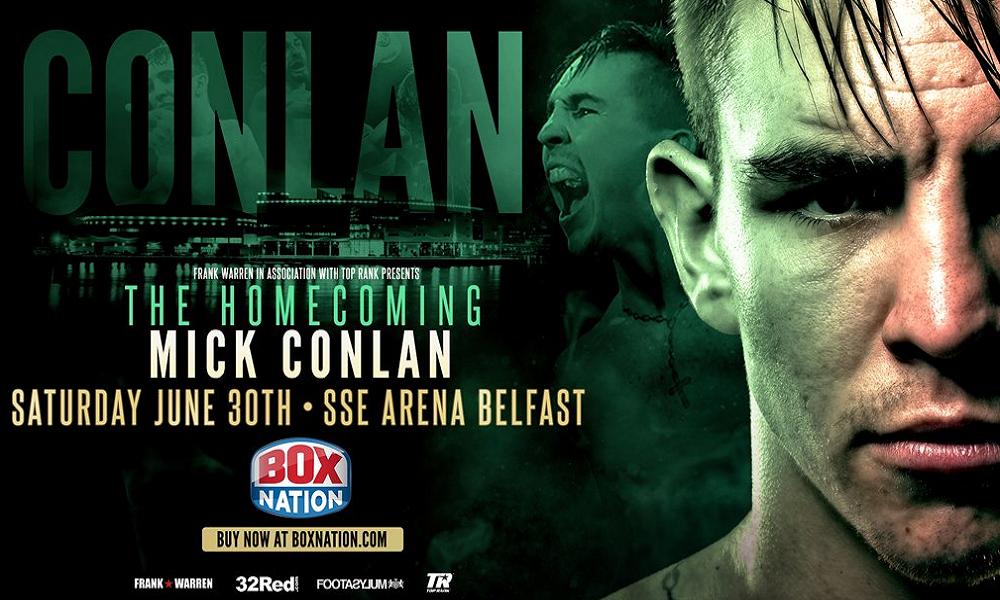 As he prepares for his encounter with Adeilson Dos Santos at the SSE Arena in Belfast on Saturday, Michael ‘Mick’ Conlan – newly sponsored by 32Red! – gives us a taste of his preparation for the big night. And his mission to find the best pancakes in Belfast, too.

“It’s been a good week. I’ve been chilling out at home here in Belfast since Sunday but I headed down to the hotel on Tuesday night. I started to really pick up the fight atmosphere buzz from there. To be honest, I was buzzing about it when I was just sat in my own home but after the public work out, things picked up big time in terms of the fans. Sometimes you just want things to be over and done with but I’m really trying to soak everything up here and take it all in.

“The weather’s been great all week and it was 27 degrees for the public workout. What a great day that was. Belfast never gets this sort of weather. Paddy Barnes was already burnt to a crisp by Tuesday.

“With the fight being at home, you do get a lot of requests and people asking for tickets but luckily now I have by brother Jamie [the former world title challenger now making strides in the business side of boxing] to handle all that stuff so I can just palm it off on him. He has to take all the flak so that I don’t have to. That’s his job nowadays.

“There are no certain places that I have to visit while I’m home but I do want to find out who does the best pancakes in Belfast. I’ve been thinking about it for ages. I’m going to put a tweet out after the fight asking people to recommend places and I’ll go out and try them all because I have time and I don’t mind getting fat for a while. They have to be the American style buttermilk ones, though. They’re unbelievable and I’ve fallen in love with them. I’ll have them with chocolate and cream and all of that stuff. If you know somewhere, give me a shout. There’s some amount of carbs in them so they’ll have to wait until after the fight.

“The weight is handy enough for the time being. It’s decent enough to make. I’ll only have to train once this week so it’s not a big shift down for me. At the end of the day, making weight is making weight and whether you only have to stand one the scales once like I do as a professional or whether you have to do it four times like I would as an amateur, it’s always hard. It doesn’t get easier, it just becomes routine. For me, it’s probably one of the hardest parts of the sport because you have to keep it consistent throughout training camp while your calories are being cut down.

“I’ve got to stay focused. Adeilson Dos Santos is a decent step up in class.  Find all the latest boxing odds here. I’m in with a guy who’s a known puncher and his record speaks for itself. He fought Jessie Magdeleno for the world title and took Kid Galahad twelve rounds. He’s a decent step up. Once we come face to face in Belfast I don’t know if he’s going to talk shit or if he’s going to be a nice guy but I don’t care and it doesn’t bother me. It’s just another job at hand and I will remain focused.

“I’ve had the experience of headlining at Madison Square Garden twice and I’ve felt the atmosphere of big, big events. It’s been great so far and I think those kind of things will stand me in good stead for things like this.

“I’m not really focusing on domestic opponents but if I look purely at the result, the fact that Dos Santos took Galahad twelve rounds is a great marker for me and a good gauge for where I am at this stage. Depending on how well I do and how well I perform, I’ll obviously take either good points or bad points from both but how other people have gone about the job doesn’t really matter to me. I’ll just focus on myself.”

The Homecoming: Exclusive video with Mick Conlan and Paddy Barnes
Out of the comfort zone: Four stars who tried to move from one sport to another