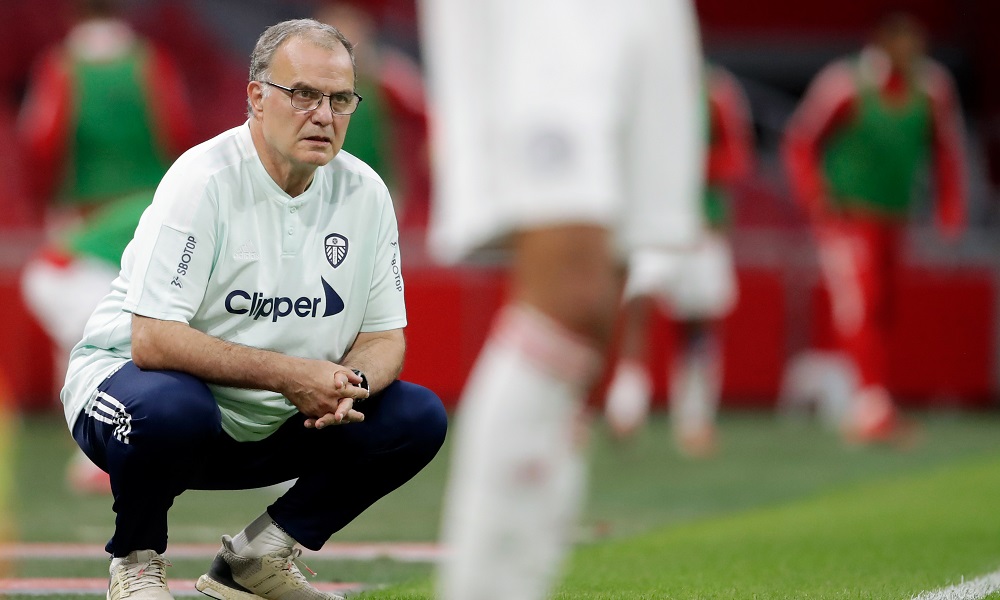 Man United started last season in sluggish style against Crystal Palace, going down 3-1 at Old Trafford to Roy Hodgson’s men. Could a similar misfire be in store for Saturday’s lunchtime kick-off?

Ole Gunnar Solskjaer will prefer to look to last season’s home match against Leeds, where United won 6-2 against Marcelo Bielsa’s entertainers. But the reverse fixture at Elland Road in April was a less goal-heavy occasion – in that it ended goalless. Has Bielsa moderated his lifelong obsession with attacking football to adapt to life against the Premier League’s biggest teams?

Maybe so, with the Yorkshire club also earning draws with Man City, Arsenal, Chelsea and Liverpool last season. They also finished their previous campaign in positive style with four wins on the bounce, though – so will Leeds’ gung-ho spirit be in evidence here?

Bielsa’s side scored three against Liverpool in their opening game of the season last time – even if they did ultimately lose 4-3, they started in positive style. With both Man United and Leeds pumped up for the new campaign, over 3.5 goals at 31/20 might be worth backing.

Otherwise, Man United will be hopeful that Jadon Sancho can show exactly why he’s so highly rated. The former Dortmund man is 39/20 to find the net at any time, though Edinson Cavani at 11/10 could a good shout too – the veteran forward has 10 goals from his last 11 appearances in all competitions.

They got off to a very slow start last season too, having to wait until November before recording their first league victory, against Crystal Palace. A refresh seems overdue – but while the side looks in need of new blood, goalkeeper Wayne Hennesy and centre backs Jacob Bedeau and Nathan Collins are the only arrivals so far this summer.

But if you’re thinking the Seagulls can swoop in and snatch the points like a doddering old man’s bag of chips, it’s worth pointing out that eight of the last 11 matches between these teams have ended in draws.

Under Graham Potter, Brighton have earned a reputation for dominating games and putting in good performances without necessarily collecting the win. Can Potter improve on that failing in this campaign? He’ll have to do so without defender Ben White, sold to Arsenal this summer; Brighton’s biggest signing, meanwhile, has been 23-year-old midfielder Enock Mwepu, formerly of RB Salzburg.

Back to Saturday’s game, and the draw is a 21/10 shot, and could well be worth backing here once again.

Crystal Palace have a new manager in Patrick Vieira, and the Arsenal legend could be in for a rum go of it in his first game in charge. Fresh from that Champions League triumph, now Chelsea boss Thomas Tuchel is eyeing Premier League glory, and his side seems the likeliest candidate to stop Pep Guardiola from bagging another title for Man City.

Chelsea have been efficient rather than bombastic under Tuchel, but they did beat Palace 4-1 at Selhurst Park in April (and Frank Lampard’s side won 4-0 at Stamford Bridge earlier in the season, too).

A tough ask for Paddy’s Palace to get anything here then. It’s difficult to single out a potential scorer since no one player particularly shone for the Blues last season; Romelu Lukaku’s imminent signing will take care of that issue at least. For now, Chelsea to win to nil is a 7/10 shot that looks a strong possibility. If you’re expecting a drubbing, over 3.5 goals could be worth a look at 2/1, or 19/5 if you choose over 3.5 goals solely from Chelsea.

Everton underperformed with Carlo Ancelotti at the helm last time out – and with the Italian reluctantly exiting his Mersey paradise to slum it with Real Madrid, now it’s Rafa Benitez who’s taking the reins at Goodison Park. Huh.

The former Liverpool coach has not exactly been greeted effusively by every Toffees fan, but if Benitez can bring some consistency to Everton, perhaps his former allegiance can be forgotten.

As for the Saints, they had a pretty lousy season last time – and since then, main goal-provider Danny Ings has been sold, with Ralph Hasenhuttl currently amongst the favourites in the next manager to leave market. It’s not an auspicious build-up to the big kick-off.

Everton are favourites to win at 10/11, and it will be interesting to see if Benitez can immediately improve Everton’s woeful home record of the last campaign.

Dominic Calvert-Lewin got off to a good start for the hosts last season with six goals in his first four matches, and the Englishman may be worth backing again here; DCL is 5/4 to score on Saturday, assuming he starts – he missed a friendly earlier in the week with a “slight knock”.

Leicester were excellent for much of last season before fading at the climax, a familiar story for Brendan Rodgers in the Premier League. Still, his team looked oddly delighted to win the Community Shield against Man City last week, and will be hopeful of starting their campaign with victory against Wolves.

A word of warning – the last four encounters between these sides have yielded precisely one goal (scored by the Foxes). Still, new Wolves boss Bruno Lage might not be so goal averse as his predecessor; the former Benfica coach oversaw a 10-0 beating of Nacional back in 2019, en route to winning Portugal’s Primeira League.

Life in the Premier League may not be quite so accommodating for Lage, though. For the Foxes, there’s certainly lots of potential for goals in new signing Patson Daka, who was the leading scorer in the Austrian top flight when he played for RB Salzburg last season. Will the new signing figure here, or will Vardy and Iheanacho continue to be Leicester’s mainstay forwards?

Iheanacho scored the penalty that won the Community Shield for Leicester last time out, and he is 19/5 to find the opener here.

Here for a bad time, not a long time – it’s a phrase that might be levelled at Watford coach Xisco and the Hornets themselves this season. Despite clinching promotion to the Prem, the Spanish coach is a 6/1 joint favourite to be the next coach to leave; his side are evens to be relegated.  Poor old Xis is probably wishing he hadn’t bothered busting his hump to get these lads here in the first place.

As for Villa, last season they finished 11th in the table, enjoying some memorable results under Dean Smith; will the departure of assistant coach John Terry make any difference to Villa’s future progress?

With respect to the always colourful JT, the loss of Jack Grealish is probably a bigger concern. But Villa have bought prolific striker Danny Ings, and there’s an air of positivity around the club despite Grealish’s departure. Ings is 33/20 to score at any time.

Norwich are another side who spend all their time trying to get into the Premier League, then don’t especially enjoy themselves where they get there. Promoted to the Prem in 2015, they were relegated in 2016; they again landed promotion to the top flight in 2019, only to be sent down in 2020, after losing their last 10 games in succession. Now the Canaries are back – and favourites to be relegated at 9/10.

It’s a bit dispiriting, but at least Norwich made a habit of pulling off a few shock wins last time they were here. Can they do something similar against Liverpool here? Uncertainty surrounds the Merseyside team after their mid-season fall from grace last time out.

While key defender Virgil Van Dijk’s return is manna from heaven for Liverpool, the side have not bought much fresh blood in during the transfer window.

Maybe the team that won the league back in 2020 can still challenge the likes of Man City and Chelsea – but it’s difficult not to recollect that spate of losses at Anfield last season and wonder if the Klopp glory days have been and gone already.

None of which necessarily means Liverpool won’t win this game of course. Assuming Diogo Jota starts, maybe it’s better to back the Portuguese at 21/20 to score at any time for the visitors.