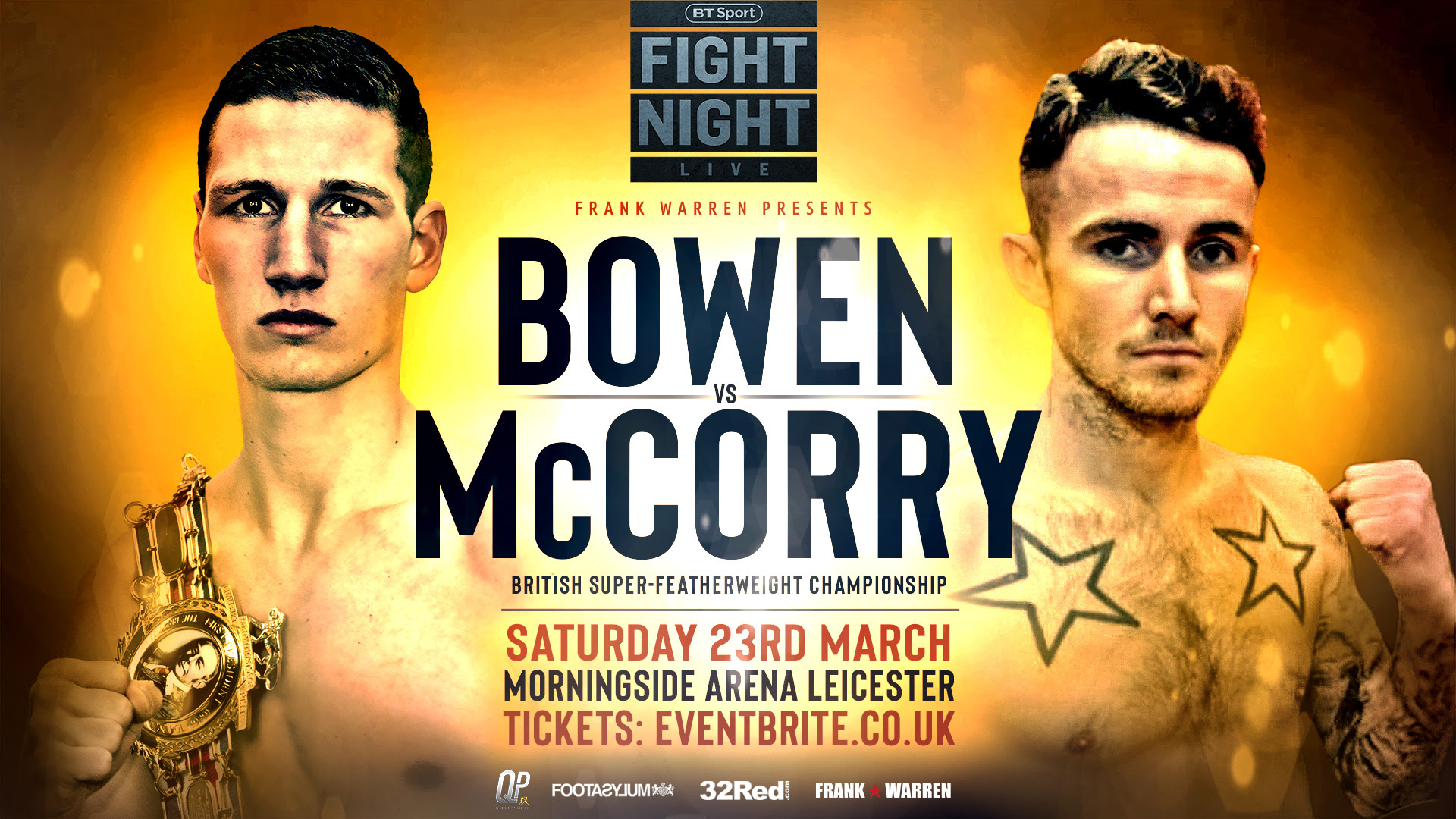 Sam Bowen exclusive: Talking won’t get you there. It’s winning fights that does it.

The venues may be larger and the profile bigger but British super featherweight champion Sam Bowen is still dealing with the same old problem.

“I get so many opponents that for one reason or another never come off,” Bowen (14-0,10 KO’s)  told 32Red. “It happened five times when we due to fight for the English title. For the British we got Maxi Hughes. After that I don’t really know. That’s why I never watch too much of my opponents. I never look at anything two months out because I don’t think there’s much point. My trainer, Carl Greaves, watches them and we work on things.”

After initially being matched in a certain war with the come forward Ronnie Clark, ‘The Bullet’ was then close to accepting the role of hunter in a fight with the well rounded Craig Evans this Saturday night. Instead, the 26 year old from Ibstock will defend his Lonsdale belt against Jordan McCorry.

Bowen has just begun to establish himself as a television attraction and could be forgiven for worrying about a late notice change of opponent disrupting his preparation but whoever the opponent and whatever the style he initially signs to fight, experience has taught him to be ready for anything.

“Whatever name that comes forward now I have to expect that they’re going to be a tough opponent. I just have to deal with whoever it is, whenever the fight happens,” he said. “I didn’t really know much about Craig Evans but when they mentioned him to me I had a quick look at him against Tom Stalker and thought he looked a good lad. I was looking forward to boxing Ronnie because I enjoy having a good scrap.

I’ve had a lot of different sparring partners and as an amateur I’d come out on top against somebody who was going to stand toe to toe with me. The only fights I’ve ever really lost were against guys who I had to chase down. Over three rounds it’s quite difficult. As a pro you’ve obviously got more rounds to wear them down. I usually spar lads who are a bit heavier than me and I’ll stand toe to toe and have a good scrap with anybody.”

Bowen built his reputation under the dim lights of the small halls. Those who hadn’t seen him fight watched his record build ominously on Boxrec whilst those who had seen him in action on Carl Greaves’ shows came away talking excitedly about the best kept secret in British boxing.

Learning his trade in this way helped Bowen to perfect his craft but it also made it difficult to lure attractive, name opponents into the ring with him. Through determination, Bowen and Greaves battled their way into a shot for the vacant British title. Winning the Lonsdale belt opened up new avenues.

“It’s difficult being on the small shows when all you ever want is to be on the bigger shows,” Bowen said. “After I won the British title it all came together though. I boxed on the last big show in Leicester and I’m thankful that I’m on again. These are the best shows that you’re going to get on. I don’t think it’s necessary to rush”.

“Obviously, now I’ve won the British and WBO titles I’m not going to be going backwards, I’m going to be pushing further on. If – for example – tomorrow I boxed for a world title then that’d probably be a little too soon but we’re on the right tracks”.

“If my first fight had been on TV, after ten fights or so people would have been asking when I was going to be fighting for titles. You can then maybe be pushed a little bit into the deep end. I don’t know about others but hopefully the way it’s going now is the right way.”

Twelve months ago, Bowen was the dangerous but unheralded danger man of a bubbling super featherweight division which also includes 32Red ambassador Zelfa Barrett, Archie Sharp and Lyon Woodstock. Times have changed. Perseverance has paid off and it is now he who leads the pack. Bowen is looking to push onwards and upwards rather doubling back on himself to stay in the mix but if any of his British rivals can keep up with him, he is more than happy to take them on.

“If they’re on my path, I’ll box them. There’s no point in boxing if it’s meaningless. It’s got to be worth something. It’s obviously got to be for a title and a lot of money. Let them get in to position. I’m not chasing after them now. To be honest, I was never chasing after them in the beginning though.

“For example, you were saying they’ve been ahead on social media but that’s just because they’ve put themselves there. Far play to them. They’re good at it. Anyone can talk and be a loudmouth and people suddenly think somebody’s amazing because they can talk. I’m too busy for that. If I put all my time and effort into that then my name would probably have been right up there with theirs. I probably wouldn’t have a social life though.

“Winning fights gets you to where you want to be and that’s how I’ve done it. Talking won’t get you there. It’s winning fights that does it.”

Johnny Garton exclusive: I ain’t gonna change who I am
Nathan Gorman exclusive: When you’re in the gym with Ricky every day you can’t help but learn.