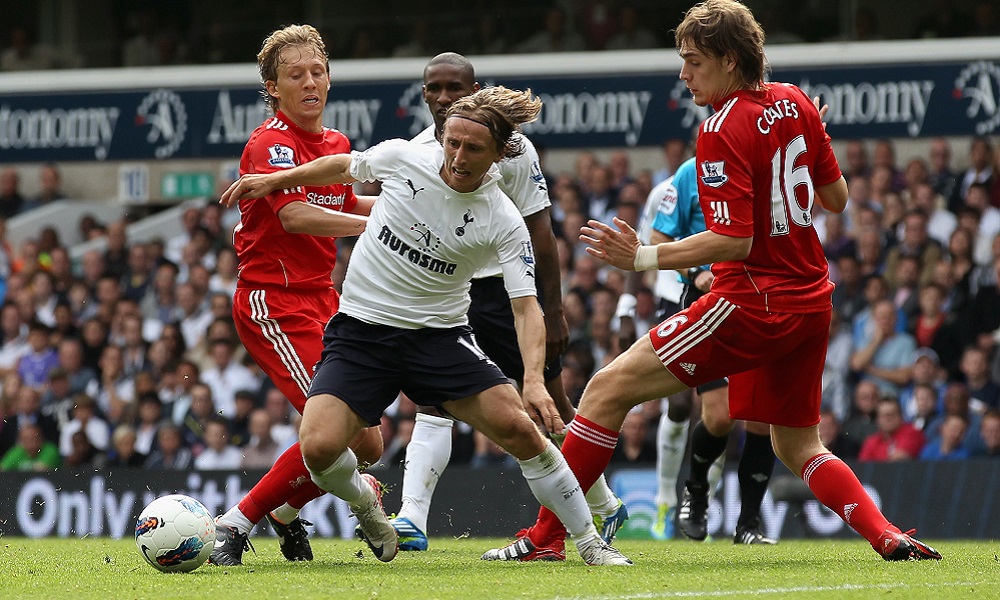 Have Tottenham finally got the hang of winning at Wembley, their current home? The North London side won their last game at the Stadium, beating Bournemouth by a goal to nil last Saturday.

But Liverpool will be in fine spirits after their spanking of the luckless Maribor in the Champions League earlier this week. Klopp’s side won 7-0 against the Slovenian side – and the German coach will be hopeful his side still have more goals in them this weekend.

Whichever side triumphs on Sunday, there have been some classic encounters between Spurs and Liverpool over the years at White Hart Lane. Here’s four of the finest.

Liverpool have generally enjoyed the upper hand over Spurs, winning 69 league games against the North London club, while Tottenham have won just 41 of their league meetings.

Still, Spurs made mincemeat of the Merseyside team on this occasion, Harry Redknapp’s side benefitting from Charlie Adam’s typically dim-witted sending-off; Adam was shown a second yellow card in the 28th minute for following through with a tackle on Scott Parker. Tottenham were already a goal to the good by that point, courtesy of Luka Modric’s 25-yard curler in the 7th minute.

Martin Skrtel would also be sent off for Liverpool in the second half, after a reckless challenge on Gareth Bale; shortly afterwards Jermain Defoe scored a second for Spurs, with Emmanuel Adebayor finding the net two minutes later – and on his home debut too. The Togolese player would get a second with the last kick of the match to end the game in style.

With Liverpool hopeful of securing a fourth-place finish and that all-important spot in Europe, Mauricio Taricco opened the scoring with his first goal for Tottenham on the 49th minute, but just two minutes later Michael Owen would equalise for the visitors.

Emile Heskey and Steven Gerrard scored in the 72nd and 82nd minute to put Liverpool firmly in control. Teddy Sheringham gave the home side cause to believe when he fired in a goal on the 87th minute to set up a grandstand finish, but the visitors hung on. A fine performance from Gerrard then, but Spurs boss Glenn Hoddle concluded: “There was nothing wrong with the [Tottenham] performance – apart from throwing the game away.”

With Spurs flirting with disaster in the league – they would eventually finish 14th this season – the side produced one of their better performances of the campaign here, but could still only take a point.

Three times Tottenham would take the lead in this game; and three times Liverpool would fight back to level the scores. Jurgen Klinsmann opened the scoring for Spurs with a fine header on 13 minutes, before Steve McManaman equalised eight minutes later.

Four minutes into the second half, David Ginola gave the home side the advantage with a belter of a shot, but Paul Ince scored on the 64th minute to restore parity. Then Ramon Vega popped up with a header in the 80th minute to give the home side the advantage – only for McManaman to score his second of the match in the 89th minute, ensuring that Liverpool would take a share of the spoils. Spurs boss Christian Gross would keep Tottenham up, though in the following season he survived only three games before then chairman Alan Sugar wielded the axe.

A rare roasting for Liverpool from the Lilywhites, who topped the league table prior to this game; under manager Bill Nicholson, the side had won the league and FA Cup double two years earlier, and in this campaign they would go on to win the European Cup Winners Cup.

In this match, Jimmy Greaves took just eight minutes to score the opener, but the Reds’ found an equaliser courtesy of Roger Hunt on the 25th minute.

Cliff Jones would put Tottenham ahead once more in the 39th minute, with a third arriving moments before the interval as the referee awarded Spurs a penalty for a handball that the Liverpool players hardly felt was merited. To add insult to injury, the visitors had had two penalty shouts turned down minutes earlier.

In the second half Tottenham really took charge, Cliff Jones rattling home a fourth goal from a corner on 54 minutes, before Hunt raised the faint prospect or a comeback for Liverpool with a 20 yard screamer in the 70th minute.

But Frank Saul found the top corner in the 80th minute to snuff out any hope of a comeback, before Greaves got his hat-trick in the 84th minute – and then scored once more for good measure in the dying moments with an awesome strike, to finish with a similarly awesome scoreline.

Tottenham host Liverpool in Sunday’s afternoon kick-off. To bet on this game or a range of other sporting events, check out 32Red Sport – and if you prefer table games or slots action, be sure to take a look at 32Red Casino.