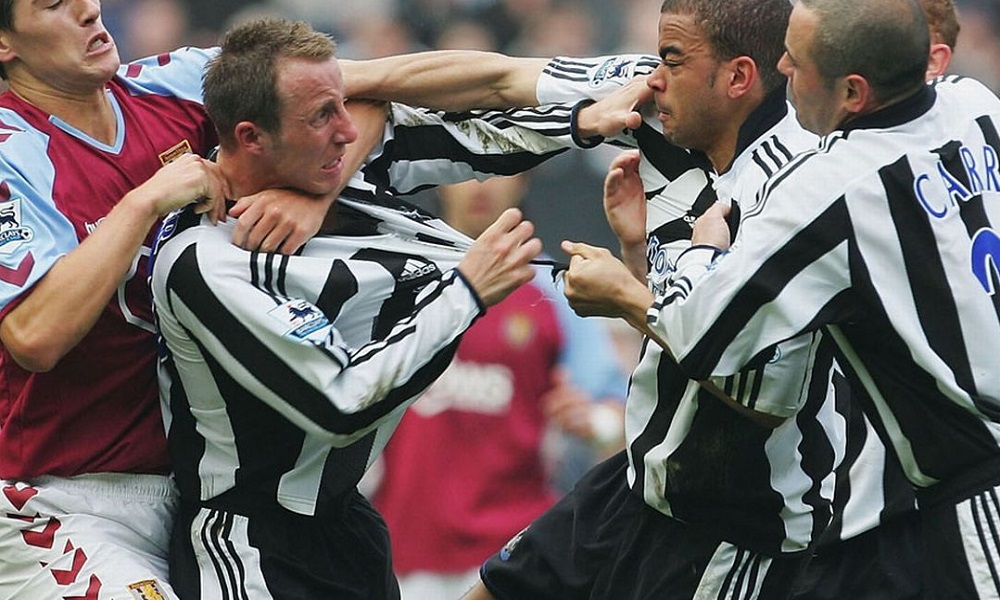 In the classic Midnight Run, Charles Grodin’s character tries to avoid boarding a plane, claiming he suffers from a fear of flying – aviaphobia. Which prompts Robert DeNiro to tell his reluctant companion “if you don’t co-operate, you’re gonna suffer from fistophobia”.

Sometimes you have to work with people you wouldn’t voluntarily choose to spend time with – personal differences shouldn’t matter, with the focus being on getting the job done. Sadly, it doesn’t always work like that.

Which brings us to Raheem Sterling. The Man City striker is set to miss England’s Euro 2020 qualifier against Montenegro this week after a training ground bust-up with fellow England player Joe Gomez.

Surly Sterling isn’t the only man to lose his rag with a co-worker on the pitch, of course. Here’s five more times that teammates got into a tussle. 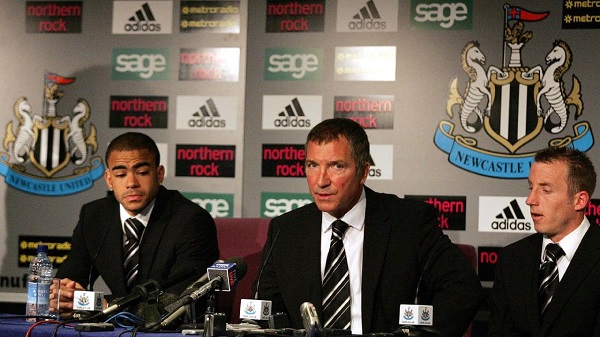 This is one of English football’s most famous dust-ups. Dyer was the once promising younger player who hadn’t managed to live up to early expectations; Bowyer had a history away from the football pitch, one incident seeing him go to court for assaulting a student (though he was cleared of any wrongdoing).

In any case, in April 2005 the pair were playing together for Newcastle at St James Park – and in the closing minutes of the game, with the side losing 3-0 to Aston Villa, Bowyer took exception to Dyer, who he accused of deliberately not passing him the ball.

Expertly acting to defuse the situation, Dyer responded that the reason he hadn’t been passing to Bowyer was simply because he was “shit”. Eep. After a bit of to and fro, Bowyer would throw a couple of punches before being dragged away, each player being shown a red card for their troubles.

Bowyer would be given a four-match ban and fined six weeks wages, and was widely viewed as the man at fault, with Magpies boss Graeme Souness describing Bowyer’s behaviour as “indefensible”. Not to worry – Dyer says that the pair are friends now: “That’s just the way Lee is.” 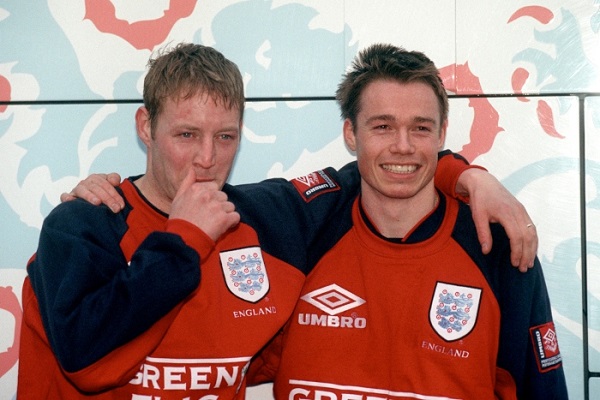 Le Saux is not one of English football’s hard men. Disparaged as something of a boffin in footballing circles, the Jersey-born player was once mocked by Andy Townsend for reading the Guardian!

Nonetheless, beneath Le Saux’s bleeding heart liberal exterior beat the heart of a lion. So it was that a brawl that was as unlikely as it was unseemly erupted between Graeme and fellow Blackburn player David Batty, mid-Champions League encounter against Spartak Moscow.

The two players collided while going for the same ball, with Batty voicing his frustration at Le Saux in a style we can safely assume falls into the “industrial language” category. Le Saux was so incensed by this he punched Batty in the throat, Blackburn captain Tim Sherwood getting between the pair before any further damage could be done (though Sherwood received a smack in the mouth of his own from the still livid Le Saux).

With the pair continuing to hurl boorish insults at one another as their teammates kept each other apart, the real mystery is why the referee didn’t send the pair off. Perhaps he was enjoying the show as much as everyone else, or maybe he just didn’t want to get on the wrong side of ‘psycho’ Le Saux.

Whatever, the game continued, Blackburn lost – and Batty departed the club a couple of months later. As for Le Saux, he looked back on the incident with bemusement in his autobiography. “I swung at him, connected and knew immediately that I had broken my left hand. I am not a fighter.” 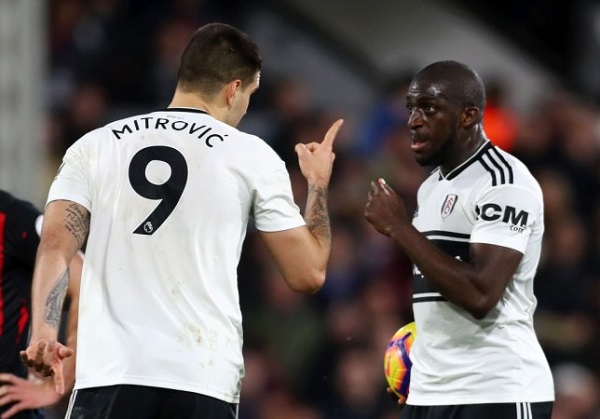 Any kind of face-off between colleagues tends towards the ludicrous, but the setting to this squabble was so ridiculous, it could have been an outtake from the Borat movie.

Back in January, with Fulham midway through a lousy Premier League season that would see them finish 19th, players Aleksandar Mitrovic and Aboubakar Kamara were taking part in a yoga session. Not exactly a pursuit to get the blood roiling, the idea of this meditative Indian exercise is to calm and centre the mind.

Instead, with bad feeling having festered between the two players since Kamara took and missed a penalty that Mitrovic had been ready to take, the search for spiritual enlightenment ended with the Serbian telling Kamara to “shut up”, explaining later that the player had been ‘rude,’ refusing to stop talking when the yoga teacher asked him to be quiet.

If there was any doubt who was at fault here, a few weeks after yoga-gate, Kamara apparently clocked a security guard, immediately getting banned from the club’s training ground. The Frenchman has now been shipped out to Turkish side Yeni Malatyaspor… 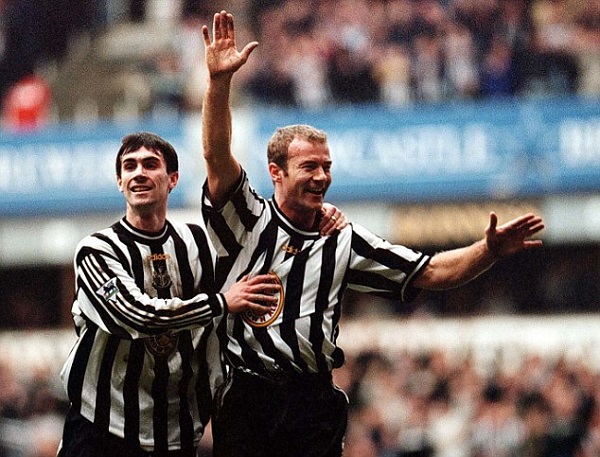 During a beer-fuelled break to Dublin in 1997, Newcastle’s Keith Gillespie fell out with Alan Shearer in a big way. Exactly what led to the contretemps is not entirely clear – like a pissed-up version of Rashomon, everyone’s got a different story.

In David Batty’s autobiography, Batty, who was there, says that Gillespie had decided that flicking bottle tops at Alan Shearer’s head would be good for a few laughs. Shearer responded to this boyish prank by telling his team-mate “do that again and I’ll give you a good hiding”.

Gillespie himself reckons it was nothing so provocative, claiming he knocked over some cutlery, which was enough to arouse Al’s ire. And Shearer’s version of the story is that, after hours on the ale, Gillespie deliberately knocked a bunch of glasses off the table, shattering them – then did the same thing an hour later, infuriating Shearer in the process.

In time-honoured tradition, the pair duly decided to take their disagreement “outside”, where Gillespie supposedly threw a punch at Al from behind as the striker was walking to the car park. Shearer turned round and stuck one on Gillespie, promptly decking him. 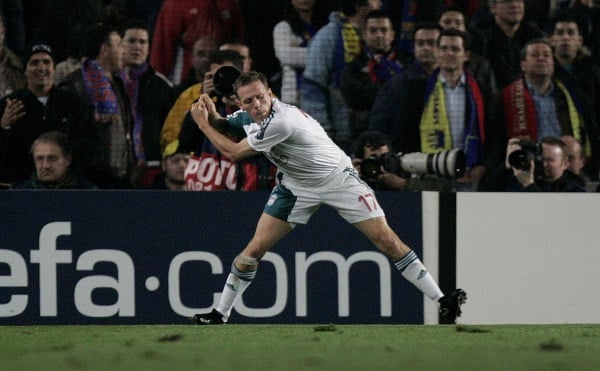 In 2007 Craig Bellamy and John Arne Riise were teammates at Liverpool, the pair finding themselves in Portugal, the aim being to relax before an important Champions League encounter. In retrospect, not Rafa Benitez’s greatest idea.

During a memorable night out that also saw goalkeeper Jerzy Dudek arrested for refusing to leave a bar, Bellamy had needled Riise, drunkenly insisting that the Norwegian take part in the karaoke action that was providing the night’s entertainment. Riise responded, not unreasonably,  by telling his teammate to wind his f%$king neck in. A storm in a teacup? Not exactly. Later that night a still furious Bellamy would burst into Riise’s hotel room wielding a golf club.

Bellamy’s recollection of the incident makes it sound almost like a bit of fun that got out of hand. But in his autobiography, Riise said of the attack: “Bellamy raised the club over his head and swung as hard as he could. He tried to hit my shins, which would have ended my career, but I managed to pull my leg away in time. He raised the club and swung again. This time he connected. Full force on my hip.”

Bellamy was later fined £80,000 and issued an apology – although as Riise notes, the fact that the player scored a goal soon afterwards and celebrated by miming the swing of a golf club suggests that maybe the sorrow wasn’t all that sincere…