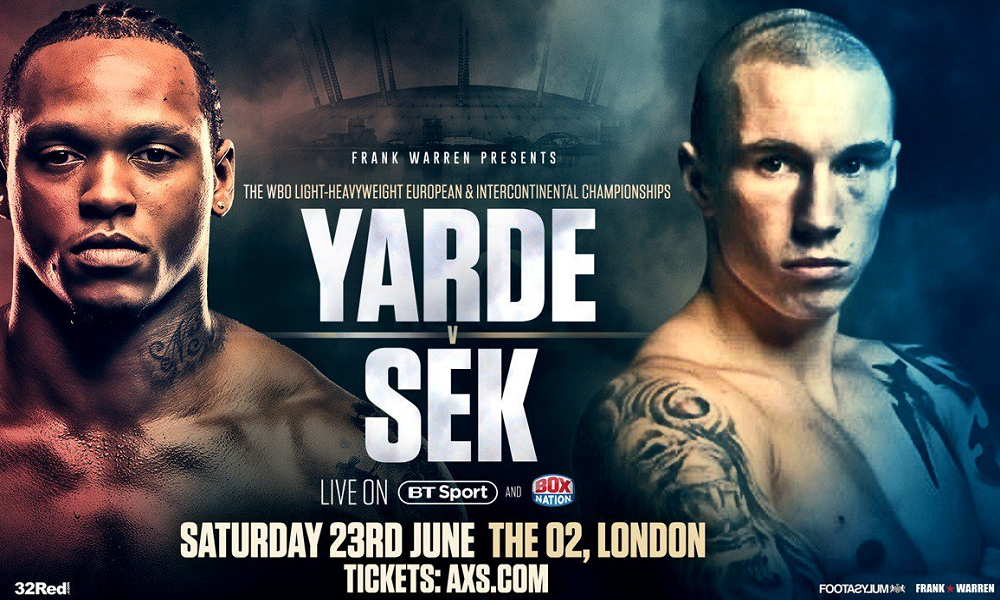 Despite his face looking out from countless magazine pages and television adverts, there is still an element of mystery to Anthony Yarde.

None of the sparring stories which swirl around the industry seem to involve the 26-year-old light heavyweight. He never targets rivals in public and, so far, none of his opponents have been able to drag him out of his relaxed style and into a battle. Nobody is quite sure just how good Yarde is, and everybody is getting increasingly desperate to find out.

“I love that. I feel like that’s part of the journey. ” Yarde (15-0, 14 KO’s) told 32Red. “When I started out, nobody knew who I was. It builds. When you see something building, it’s a beautiful thing. I’m enjoying it but keeping my feet on the ground. I’m not getting big-headed by this fame that’s slowly coming or anything like that. I’m just trying to build.

“Everything is timing. It’s something that not everybody understands. You can waste your time explaining it. Some people like boxing and some people like fighting. That’s just how things go.”

On Saturday night, Yarde faces Poland’s Dariusz Sek (27-3-3, 9 KO’s) at London’s O2 Arena. Find the latest odds for the fight here. Sek will be the first southpaw he has ever faced, amateur or pro, not that Yarde sends too much time worrying about what his opponent may be capable of.

“Literally, it’s all about me. I need to focus on myself and become a better fighter. In the ring, you never know what somebody is going to do so it’s about being sharp yourself and being able to deal with whatever comes your way. That’s why boxing is so exciting.

“You never know what’s going to happen. You don’t know how the person is going to fight you. They may come out and fight you differently to how they’ve fought anybody else. It’s about adapting quickly and once you figure out your opponent, you can go to work.”

Sek is, tall, left-handed and sports a winning record. Granted, he isn’t one of the leading lights in a thriving world light heavyweight scene but the major source of disappointment for many fans is that he isn’t British. With such an exciting group of fighters competing domestically at 175lbs, external pressure is building on Yarde to join the mix. The Londoner’s team, however, are perfectly happy with his progress.

“From looking at the sport as a whole and looking back through boxing history, I’ve realised I need to worry about my job. My job is to fight,” Yarde said. “I’ll be honest with you, at the moment I’m not in control of who I fight. I can argue my point but I’m not in charge of the opponent.

“I understand the history of boxing. Whoever is put in front of me I need to demonstrate on them and do as good a  job as I can on them. I feel like if you put your hands in different pies, at the end of the day you don’t get a good grip on any of them. My pie right now is the fighting. I think I’ve done well so far because I’ve focused on one thing and that’s fighting.

“Not only that, I feel like it’s working. Since the beginning of my career I’ve never focused on another person. I’ve never said; ‘I’m coming for this person.’ I’ve always just focused on myself. I feel like people are calling out my name right now because I’m doing something right. I’m trying to keep it that way.

“I don’t feel like there is anybody out there right now who I’m chasing. The only thing I’m not at right now is world level but I’ve been called for a world title shot already. That just shows the level that I’m getting to. I’ll just keep doing what I’m doing.”

Callum Johnson recently said ‘yes’ to the opportunity that was initially presented to Yarde. The new British champion tore the title from Frank Buglioni and decided to instantly parlay his fortune into a world title bid, leaping at the chance to take on fearsome IBF champion, Artur Beterbiev. It is a risk which doesn’t fit in with Yarde’s long term view of his career.

“He [Johnson] had been out of the ring for a long time and just had a good win but I feel like things like that come with doubt. You know when you doubt yourself and wonder if the opportunity will ever come again? I’m a very confident person and I’m a strong believer in that whatever will be will be anyway.

“Whether I do it now or do it in six months time or eight months time, I’m just not putting any pressure on myself. I’m trying to become a better person and a better fighter every day.”

Raheem Sterling and Harry Kane are the latest sporting figures to have their lives scrutinised. Whether you believe that it is engrained in the British psyche to cut people down once they begin to earn success or whether you feel that the criticism is borne out of frustration at not yet seeing true potential fulfilled, what can’t be disputed is the fact that the extra attention created by a high media profile brings added expectation.

“One thing I’ve learned growing up is that you can’t please everybody. It’s a losing battle. I’m trying to please myself first and then put myself in a position where I can help my family and those around me who are less fortunate. In order to do that I need tunnel vision and that’s what I’ve got right now.

“On the 23rd, it’s another ‘Don’t Blink’ night. If you blink, you might miss it. I’m looking to have a lot of fun. You’ll see aggressive, smart boxing and whatever else comes out on the night. It’s going to be entertaining though.”

Martin Murray exclusive: I’ve never felt this good so close to a fight
Jack Catterall exclusive: I know I’ve got to win convincingly