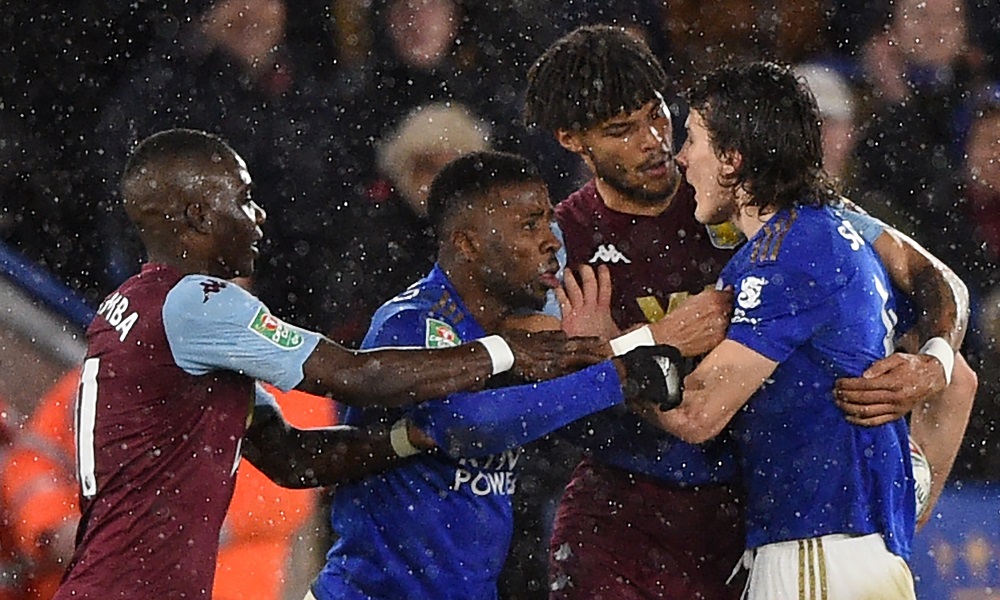 Who’s on their way to Wembley, then? The second legs of the Carabao Cup semi-finals take place this week…

Tonight, Aston Villa host Leicester City with the score delicately poised at 1-1, while on Wednesday Manchester United will attempt to overcome a two-goal lead, having gone down 3-1 against Man City in the first leg.

It’s worth bearing in mind that away goals don’t count double in this competition. Nor will there be extra time; if the teams can’t be separated at the end of the 90 minutes, the match(es) will go to penalties.

Here’s our thoughts on how the two games could play out.

With the spectre of relegation looming behind Villa – the club are just two points clear of the drop zone right now – the side could use a boost, and a trip to Wembley could prove just the tonic for Dean Smith’s side.

In the first leg, the Foxes had most of the possession but for all that the side trailed by a goal until the 74th minute, when substitute Kelechi Iheanacho saved Leicester’s bacon. Since that match, the side have lost against both Southampton and Burnley – hardly results to buoy Brendan Rodgers’s spirits, though the club remain third in the Premier League table.

More promisingly, Leicester have won their last two matches – albeit against a poor West Ham team and Brentford in the FA Cup. But Villa are improving too – they beat the resurgent Watford in the Prem a week ago.

For the visitors, Jamie Vardy may be fit to play – the striker was an injury worry, having had to leave the field against West Ham when he suffered a “twinge in his glute”. Wilfrid Ndidi should return too, and it’s fair to say Leicester have felt his absence.

Leicester have already beaten Villa 4-1 in the Prem this season at Villa Park, so it’s not hard to see why the visitors are odd-on favourites here.

Still, this one’s no done deal – in Jack Grealish, Villa have one of the most exciting young talents in English football. Villa have at least been scoring too, finding the net in nine of their last 10 outings.

It’s obvious that Leicester are the better team, but with a few wobbles of late and Dean Smith’s side showing they are capable of keeping the visitors at bay, I’d be tempted to have a small flutter on the home side winning outright at 17/5.

If that’s too optimistic for you, fair enough – but how about looking at Grealish to score at any time at 7/2. He’s Villa’s leading scorer and has already scored against Leicester once this season…

It sounds like madness to see any other outcome here than victory for Manchester City. With a two-goal lead after the first leg, City are 1/100 to make it to the final, with United 25/1 shots! Throw in the knowledge that Pep Guardiola’s side have also won the League Cup for the last two years straight, and it would be just about unthinkable if they screw this one up.

Still, let’s try to see this from a different point of view – after all, perversely, most of United’s good moments this season have come against more impressive opposition. Indeed, they beat City 1-2 at the Etihad back in December.

And after doling out a rare thrashing (yes, to Tranmere) at the weekend, maybe United are feeling a little better about themselves right now. So is it that insane to think United can pull back two goals at the Etihad, plus keep the likes of Aguero and Jesus out for 90 minutes?

Er, it probably is. Maybe have a flutter on the home team to win and both teams to score, then – it’s available at 13/8, which isn’t the most alluring price, but does seem like a feasible outcome. United have to try and find the back of the net, no?