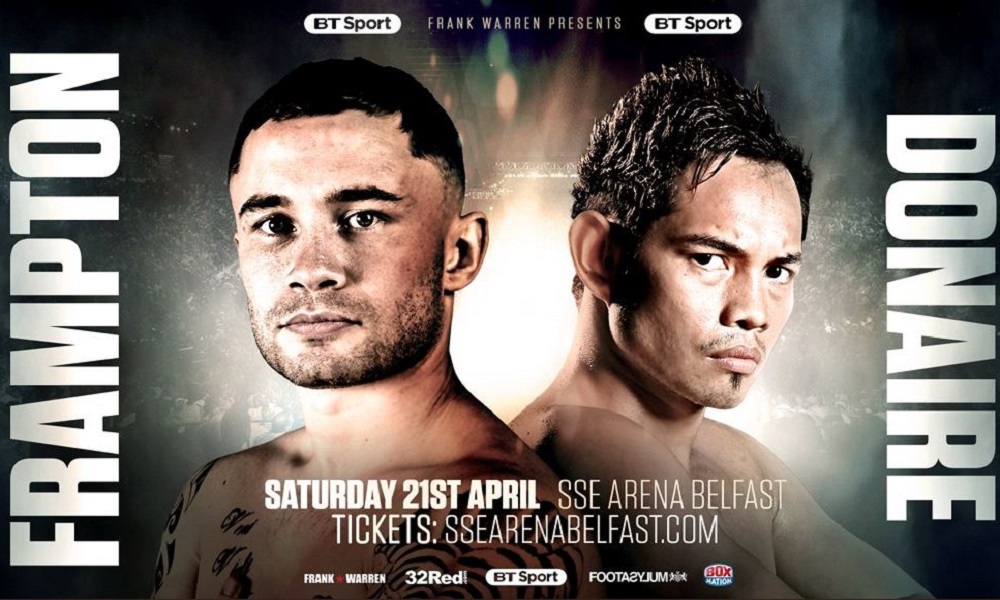 Carl Frampton on Nonito Donaire: The atmosphere will be unreal

On April 21st 2018, Frampton gets his wish. The two-weight world champion will return to the SSE Arena to face Nonito Donaire (38-4, 24 KO’s) in an outstanding match-up of featherweight contenders. The prospect of taking on one of the most decorated champions of the modern era has lit a fire under the 30-year-old. Bet on the fight here.

“This is a great fight. It’s a great fight to lead into a summer world title shot. He’s a big name and he’s a great guy too. He’s always been very respectful to myself and he’s fought some quality fighters. He’s also a four-weight world champion. I’m really looking forward to it,” Frampton (24-1, 14 KO’s) exclusively told 32Red.

“He’s a big name fighter and Belfast is a big boxing city. To have a fighter of Nonito Donaire’s quality coming over to face one of their own is a big deal. I’m glad that we can bring a fight like this to Belfast.

“I needed to be fighting somebody a step up from Horacio Garcia [who Frampton outpointed in November] and my performance will probably need to be a step up from that night too. I wanted a step up and I wanted a fight that’s going to get me ready for a world title fight and Nonito Donaire will certainly do that.”

Frampton will need to be alert to Donaire’s devastating left hook but also conscious of the added motivation of a fighter nearing the end of his career. The Filipino hero may have claimed titles in four divisions but is now 35 years old. The battle in Belfast provides him with the opportunity to instantly reestablish himself amongst the leading lights at featherweight but defeat could signal the end of his illustrious run in the sport.

“He’s a boxer but he really turns that left hook over well and he’s put a few fighters to sleep with it so I’m going to have to be careful but I just feel that at this stage of our careers, if I’m at my best I’ll win the fight,” Frampton said.

“He’s got a lot of notice for it and he’s going to be well prepared. This isn’t a last minute job. He’s coming towards the end of his career and if he loses here it’s probably the end for him. That’s going to give him a bit extra motivation and it’s something I’ll need to be fully aware of.”

The fight will act as an early acid test of the still young partnership between Frampton and his new trainer, Jamie Moore. November’s victory over Garcia developed into a tougher than expected battle as Frampton attempted to replicate the lessons he had been learning in the gym. Should he struggle to find his rhythm again in April, Donaire is more than good enough to take advantage.

“It’s gotta come together a bit better. It’s got to be perfect this time and it will be. I was aware of the mistakes I was making last time but they were things I was trying out. The difference between doing them wrong and doing them right was a split second. I was maybe staying on the ropes a little too long and maybe blocking a few too many shots before coming back with my own. These are things that I’m aware of. I’ll rectify them this time.”

The featherweight division is one of the most talent-laden in the sport and with Lee Selby set to defend his IBF belt against Josh Warrington and Leo Santa Cruz and Abner Mares due to square off in their highly anticipated rematch, the 126lb class is poised to explode into life in 2018.

Rather than biding his time and waiting to see how the land lies after those high profile match ups, Frampton has charged headlong towards arguably the most attractive and high profile figure outside of the current champions.

“It isn’t a world title fight but in terms of the world stage, it’s a bigger fight than Lee Selby and Josh Warrington. That’s a big fight in the UK and a good fight but this just shows you the calibre of the names involved in this fight here. Both guys are chasing world titles and a win gets either one of us a shot at a champion.

“The atmosphere on the night is going to be unreal. It was incredible last time and it just seems to be getting bigger and better every time I come back to Belfast. Nonito Donaire is the biggest fighter who’s ever come to Belfast to fight one of their own, maybe ever. The fans deserve this. It’s going to be a good night.”

For odds on this fight and all the latest boxing markets, check our dedicated sports betting site at 32Red.com/sport.