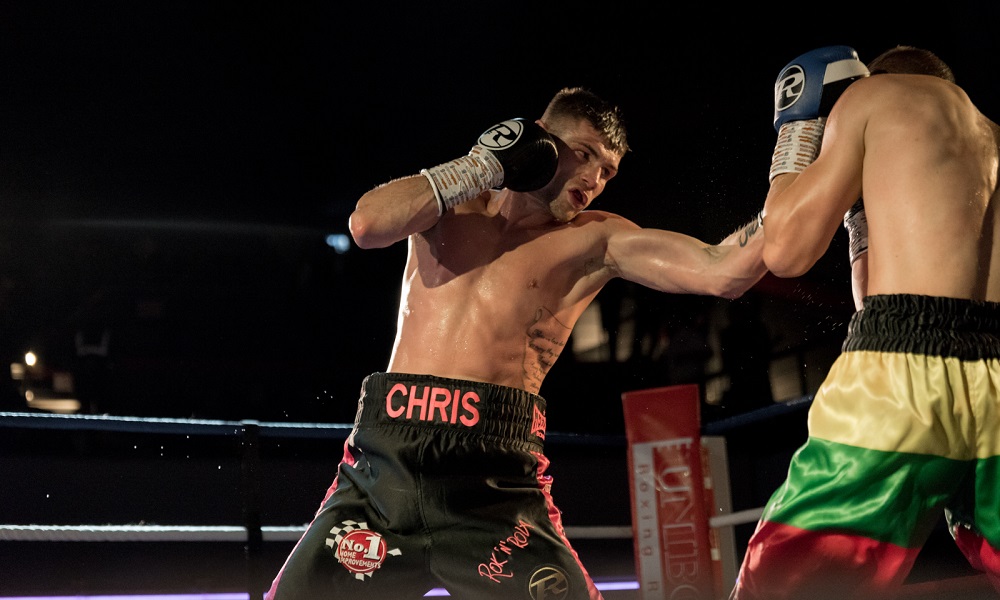 Fans who have only got to know British welterweight champion Chris Jenkins (22-3-2, 8 KO’s) during his recent career resurgence might be confused by the ‘Rok’n’Rolla’ nickname the Welshman uses in the ring. During his title winning victory over Johnny Garton, Jenkins was the coolest man in the Royal Albert Hall as he boxed perfectly to orders and he maintained his discipline and focus throughout his incident packed victory over Paddy Gallagher under the open skies at Belfast’s Falls Park. Jenkins has been more of a calm, classical pianist than a hell raising rock and roller.

“My old man nicknamed me it and it’s stuck. Chris ‘Rok’n’Rolla Jenkins. People who know me know I’m a bit of a nutter. Always making stupid noises and being a joker. When I work, I work hard though. It’s a bit of a rock and roll lifestyle. I’m not out and about around the clubs – I’m always in the house with my kids and wife – but I think I matured a bit later than other people. It’s time I grew up,” the 31 year old told 32Red.

Jenkins is one of the most modest and down to earth fighters on the British scene but his insistence that he has found his level and is content to campaign at domestic level might just be a tool to keep himself concentrated on the job at hand. Jenkins isn’t a fortunate champion. He is a talented fighter who was only denied glory earlier in his career by bad luck and debatable decisions.

“If you look at my actual losses I’ve had a narrow defeat to Tyrone Nurse, I got cut against Akeem Ennis-Brown and I got robbed in Ireland against Phil Sutcliffe,” he remembered. “I’ve had a few disappointments but they’ve made me a stronger person. From my point of view I appreciate it so much. I can’t put into words how I felt the night I won the British title.

“I treat this as my world title. I’ve always said that I’m a British level fighter and if I can win it outright I’ll be delighted and anything else is a bonus.

“My Commonwealth bet, my WBC belt, and my Prizefighter trophy are all under my bed. They’re safe. Hopefully I make enough money to buy a house and I can have a little room for my trophies.”

If Jenkins is to give the beautiful Lonsdale belt a permanent residence in his belt drawer under his bed he will have to get past Middleton’s Liam Taylor this weekend. On Saturday night, Gary Lockett will put Jenkins’ mouthpiece in and send him out to work. In the opposite corner, Taylor will get his final instructions from Steve Maylett who trained Terry Flanagan to world title glory. Both fighters are from ‘proper’ boxing gyms and are guided by intelligent trainers. It seems certain to be a hard fought, no-nonsense battle between hardened professionals. For all the latest fight odds, visit our sportsbook.

“I know for a fact that Liam is going to be mentally strong having had to wait around for his shot but I’ve been there, done it, and got the t-shirt. I’ll be ready,” Jenkins said.

“My fight against Garton, we respected each other before and after the fight. Gallagher might not have respected me afterwards but I respected him before and after. At the end of the day you could say that we’re in a sport where we’re putting our lives on the line. I have a family I need to go home to. I’m not sure if Liam does but the best man wins – that’ll be me – and we both get to go home to them.”

And there we have it, maybe the only interview you’ll read with Chris Jenkins this week that doesn’t focus on the cuts that have stalled his career time and time again.

“Oh don’t worry. I don’t mind talking about cuts, mate. I’ve gotta be careful when I brush my teeth, I have to be careful in case I cut myself. Liam is a tidy boxer, he’s not a come in fighter. We’re both neat boxers so it’s gonna be a good night of boxing for both of us and then fans too.”

Frank Warren exclusive on Midlands Mayhem
Sam Bowen exclusive: He’s gonna be giving absolutely everything and so will I