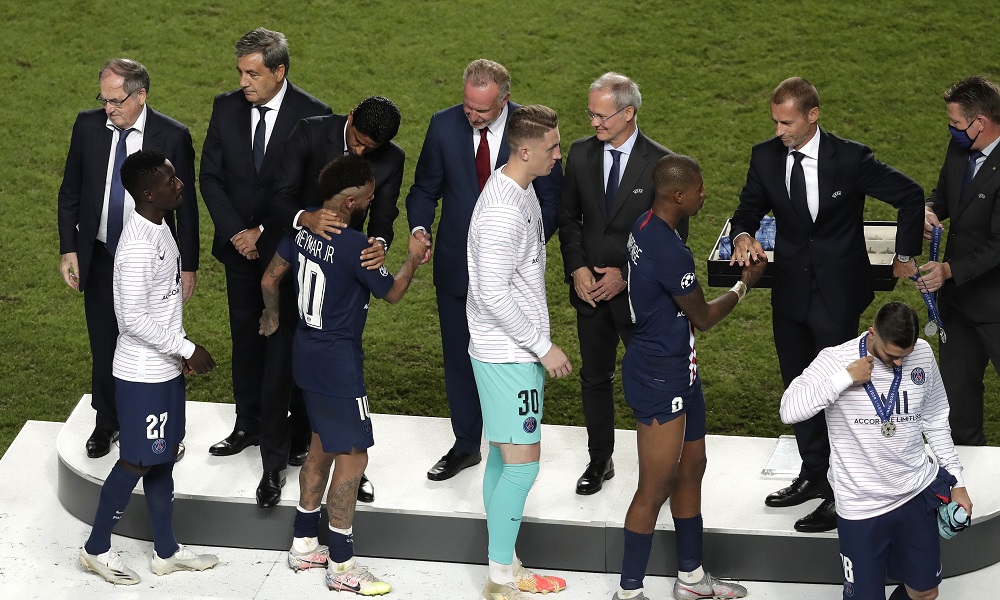 Close, no cigar: 5 teams that made the Champions League final without winning

It woz the Mun that won it, then. In the end, 2020’s convention-defying Champions League campaign concluded in fairly conventional fashion. Latest football odds here

At Lisbon’s Estadio da Luz on Sunday night, Bayern Munich defeated Paris Saint-Germain 1-0 to lift the Champions League trophy for the sixth time in their history. The favourites won; PSG lost; pandemics and empty stadiums notwithstanding, this particular ending felt like a movie we’d seen before.

If it’s any small consolation for the vanquished Ligue 1 side, PSG are obviously not the only team to have come so close to European club football’s ultimate accolade – only to wind up with its players, as Ander Herrera so poetically put it, feeling like shit.

Here’s a handful of the most notable clubs to have flirted with Champions League glory – without ever claiming the trophy. 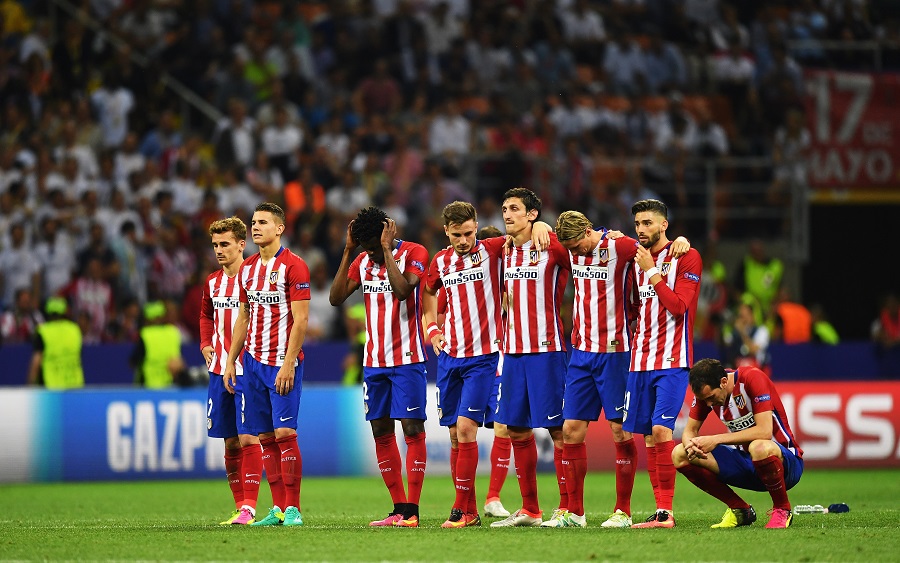 Disappointing Champions League results are nothing new to Atletico. Back in 1974, Atletico’s first effort at European Cup glory ended in a 1-1 draw with Bayern Munich after extra time. A replay – the only one in the history of the competition – was played just two days later, with the Spanish side slumping to defeat as Bayern ran riot, the German club scoring four times without reply to win its first ever European Cup.

Tough to take – but it’s in recent years that the Champions League must have been downright unbearable for Madrid’s less flamboyant side. First up, FOUR of the last seven tournaments have been won by bitter rivals Real Madrid.

More sickeningly still, two of those wins actually came against plucky underdogs Atletico. In their first meeting in 2014, Diego Simeone’s side had led since the 36th minute, only for Sergio Ramos to equalise in the third minute of stoppage time. Three Real goals followed in extra time, to leave Atletico’s hopes in tatters – for once, Simeone’s funereal attire was quite apt.

Two years later, the two sides would again meet in the final; but Atletico fans hoping for revenge as a dish best served cold instead ended up with more sour grapes. Ramos would give Real the lead, with Atletico’s Carrasco levelling the scores late in the second half. The two sides couldn’t be separated in extra time, with penalties eventually seeing Real finish on top once more. 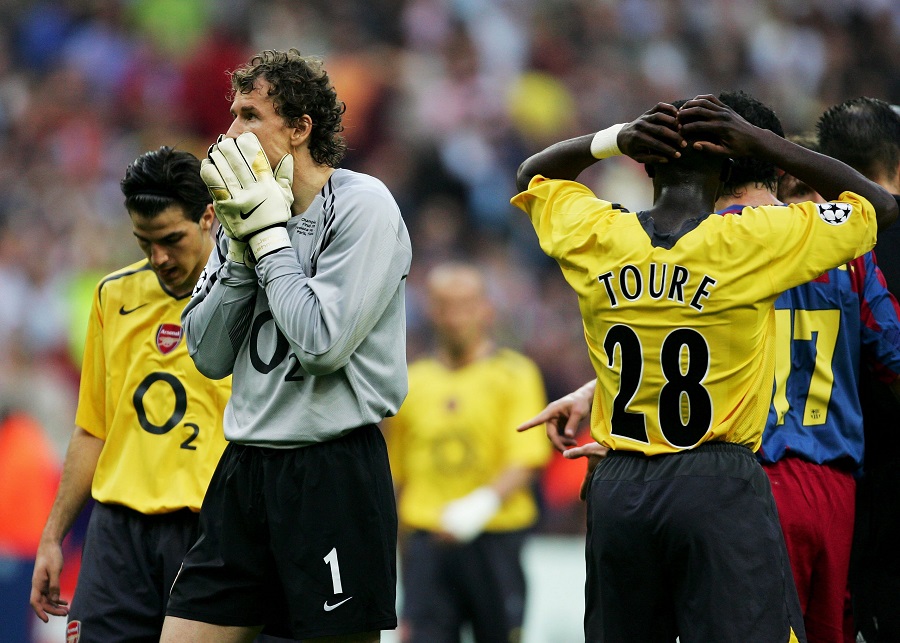 For the Gunners, their first experience of a Champions League final has, to date, also been their last. In 2006, at Paris’ Stade de France, the Premier League side faced a Barcelona that included Deco, Samuel Eto’o and Ronaldinho – with Xavi and Andres Iniesta on the bench. So it wasn’t a great omen when Arsenal goalkeeper Jens Lehmann was sent off after 18 minutes.

Mad Jens achieves some kind of notoriety for being the first person to ever be sent off in a Champions League final, having brought down Eto’o outside the box. But even down to 10 men, nonetheless it was Sol Campbell who opened the scoring with a header from a free kick.

The stage was set for an unlikely underdog story – but Henrik Larsson put an end to that hope, the Swede coming on from the bench to first set up Eto’o for an equaliser, and then provide a further assist, this time for unlikely hero Juliano Belletti. The game ended 2-1 for a result that clearly still haunts Arsene Wenger.

Four years after the defeat, the Frenchman said his side’s defeat “was the referee’s fault, basically” – perhaps an oversimplification – and in 2017, the Arsenal boss claimed that if VAR had been in use during the 2006 final, things might have been very different. More than a decade later, Wenger clearly still felt aggrieved, insisting “Barcelona’s equaliser was offside, and we were 1-0 up with 30 minutes to go.”

The supporters would doubtless disagree, but these days, outside of Spain, at least, Valencia doesn’t tend to loom large as one of the nation’s pre-eminent clubs. Yet at the turn of the century the side appeared in back-to-back Champions League finals – sadly, losing both.

In 2000, the side met Real Madrid at Saint-Denis’ Stade de France, the first time two sides from the same nation had met in a Champions League final. But Valencia boss Hector Cuper could only look on in dismay as his side were comfortably beaten by Vincente de Bosque’s Real, Los Blancos taking the lead through a Fernando Morientes header in the first half before Steve McManaman hit a fine volley to double Real’s lead in the 67th minute. Raul would score a third shortly after to put the result beyond doubt.

A year later at the San Siro, Valencia had a chance to atone for the meek showing of their previous final; but the side were again outplayed, this time by a Bayern Munich side who dominated play, albeit without initially making it count.

It started brightly, Gaizka Mendieta scoring a penalty for Valencia in the third minute; Stefan Effenberg levelled the scores with a pen of his own soon after the start of the second half. After that, normal time and then extra time were played without further goals; Bayern edged the ensuing penalty shoot-out 5-4, to the despair of the repeat runners-up.

That was it for the defensively-minded Cuper; he jumped ship to coach Serie A side Inter, and in his first season in charge narrowly missed out on winning the Italian league – as Rafa Benitez took the reins at Valencia, winning La Liga twice in three years, as well as the 2004 UEFA Cup final. Cuper might have been the nearly-man – but in his defence, Valencia haven’t had a sniff of real Champions League success since his departure nearly 20 years ago.

A year after winning their first European Cup, it seems Bayern enjoyed the experience so much they decided to do it all over again. At Paris’ Parc des Princes in 1975, the Bundesliga side saw off Leeds United in the Yorkshire club’s only appearance to date in the final.

All things considered, this wasn’t a day to remember for Leeds; the side had a goal disallowed and eventually lost 2-0, while the sight of fans rioting in the stands following some questionable refereeing decisions led to the club being banned from European competition for two years. Er, fair to say the Leeds players lived up to their reputation for robust challenges here, too… 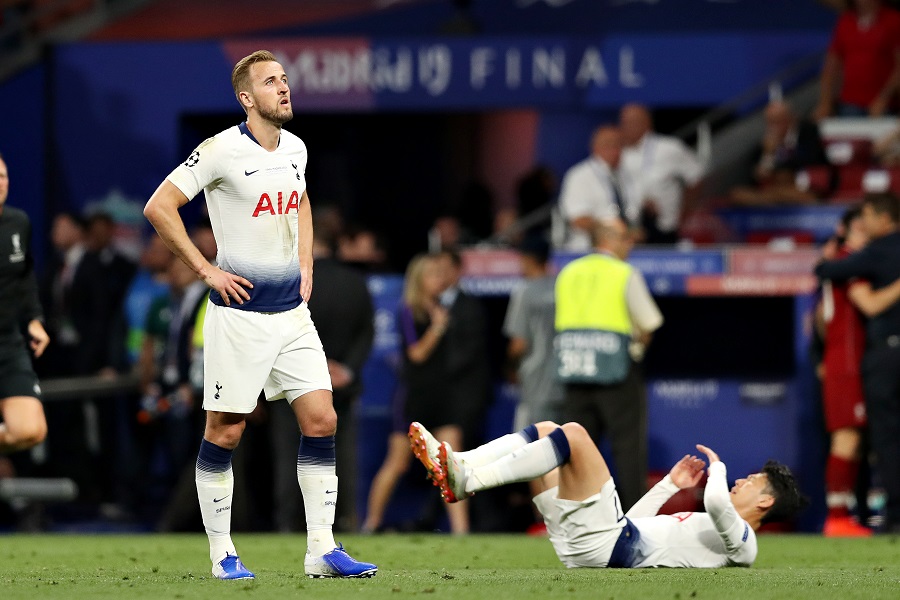 A quick mention for North London’s other Champions League finalists; in 2019, at Madrid’s Metropolitano Stadium, Spurs played Liverpool in a climax that proved pretty anti-climactic. Liverpool fans were at least delighted by the result, even if supporters of either club would be hard-pressed to praise the performances. Mo Salah scored a penalty in the second minute, with Divock Origi doubling Liverpool’s lead three minutes from time to ensure victory.

For Spurs supporters, the possibility of a Champions League triumph had been a rare ray of light in a season when things seemed to be going awry; it didn’t get much better after the defeat, with widely adored Spurs boss Mauricio Pochettino sacked by the club the following season – to be replaced by serial winner/ toxic doomlord Jose Mourinho.

Whatever effect Mou has on Spurs over the coming months, with Spurs finishing 40 points behind Liverpool last season, it seems optimistic to expect a return appearance in the Champions League final any time soon…