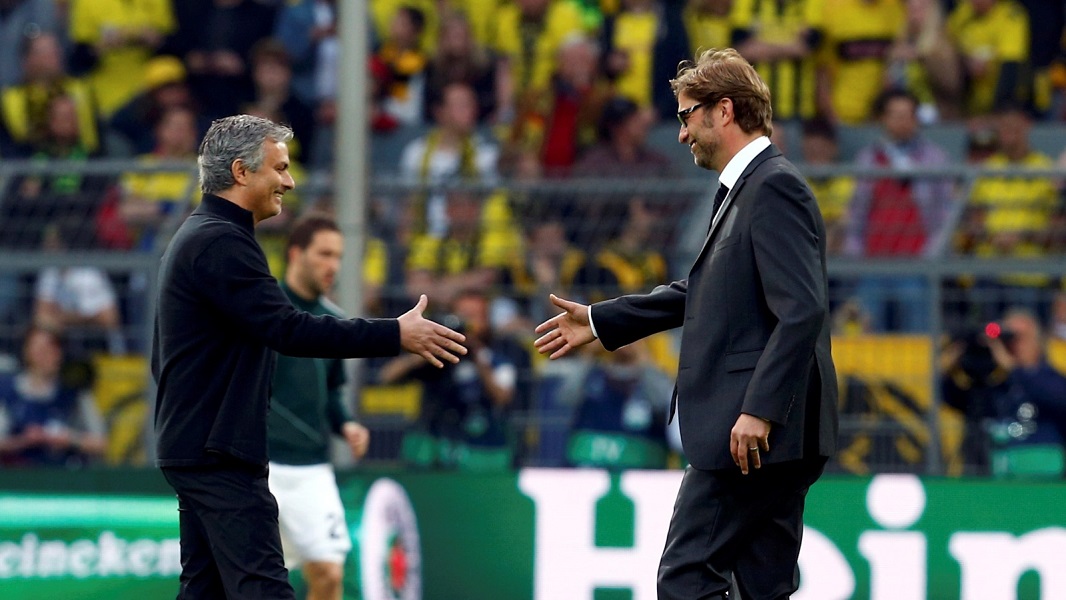 There was a time when Manchester United were widely detested throughout English football, largely for the crime of winning too much. But it was difficult to argue with their approach; the side tended to favour a free-flowing, expansive game that was as attractive as it was effective.

Now it’s Liverpool who score more goals, play more excitingly, win with style. And they’re lauded for it, too – or at least they were. Is a three-game spell without a win enough to be deemed a crisis?

No, but it’s worrying that Liverpool have entered their worst spell of the season as they prepare to take on a United team that appear to have rediscovered the will to win under Jose Mourinho.

The biggest game of the weekend sees United host archenemy Liverpool on Sunday. Sometimes accused of being fixated on past glories, since Jurgen Klopp’s energising arrival the Merseyside team’s future has seemed brighter than it’s been in years.

But after a setback at Southampton, could another stumble be on the cards at Old Trafford?

Liverpool put in one of their poorest performances of the season to lose 1-0 against the Saints earlier this week – though Klopp admits Southampton could have had three. But could a swashbuckling return to greatness be on the cards, come Sunday? Are Liverpool saving their resources for a grandstand performance against United – or are the home side set to maul their Merseyside rivals?

To understand the significance of Sunday’s game, it’s worth looking back at the recent history of these two sides. Since the early nineties, Man United fans have had plenty to be smug about, ruling the roost when it comes to British football. Over the same period, Liverpool have failed to win the league; the last time United’s bitter rivals won England’s top flight was in the pre-Prem days of the old first division, back in 1990.

In all, United have won 13 Premier League championships, sweeping to glory in the inaugural season, dominating for the first ten years of the new league – yet also finishing strongly in the final years of Sir Alex Ferguson’s reign. Man Utd won five of the last seven championships the fiery Glaswegian contested – including Ferguson’s final season.

It was always going to be a challenge to find a suitably impressive replacement for the Scot, then. Since Sir Alex’s departure in 2013, the club have hired and fired David Moyes and Louis van Gaal. Now it’s Jose Mourinho who manages the side – and while his status as a managerial great cannot be questioned, the Portuguese no longer commands quite the respect that he once did. His arrival at the Manchester club comes hot on the heels of an egregious (and quickly curtailed) campaign with Chelsea last season.

But if there’s a sense that Mou’s best days could be behind him, his side have flourished in recent weeks. Mourinho has won his last nine matches on the bounce in all competitions, and are unbeaten in 15. Zlatan Ibrahimovic has defied critics who suggested he might struggle in the Prem, bagging 13 goals already (he’s likely to be fit for Sunday’s game too, having missed the midweek EFL Cup tie against Hull).

Still, while the Manchester side have surely improved under the Portuguese, for all that United currently sit sixth in the Premier League, five points behind Liverpool. In the wake of that spectacular failure with Chelsea last season, it’s been suggested that the don is slipping, his ideas and philosophy being left behind by the current crop of managerial contenders.

Not so his opponent on Sunday. Jurgen Klopp’s usually rollicking style of play doesn’t always win the day (though the side have lost just three times this season) but it frequently results in exciting matches. With likable football – and a likable personality to match – Klopp has got the neutral onside, as well as his own support.

Fergie once told a journalist that his greatest ever achievement was knocking Liverpool off their perch. United vacated that same perch when Fergie retired; is Mourinho the man to guide United back to the top, or is his defensive, pragmatic, occasionally ditchwater-dull approach to the game outmoded in 2017?

The two sides have already met once this season of course, in a goalless draw short on quality or incident. But let’s hope that was just a dry run for something rather more spectacular here. If Klopp can mastermind an audacious win on Sunday, United will slip eight points behind Liverpool in the Prem – and the Merseyside team may start to ask themselves if this really could be the year that they win the Prem.

Of course, then they’ll need to catch up with Antonio Conte’s outstanding Chelsea side. First things first though! Let’s hope Sunday’s clash lives up to the possibilities…

Man United are 23/20 to win on Sunday with 32Red Sport, with Liverpool 14/5 to take all three points. The draw is available at 12/5. For a wide range of markets on Sunday’s game, be sure to visit our site – and if you’re looking for a different kind of flutter, 32Red Casino offers slots, table games and more.

Top 5 Reasons FIFA expanded World Cup to 48 teams
What is Jose Mourinho sulking about this week?