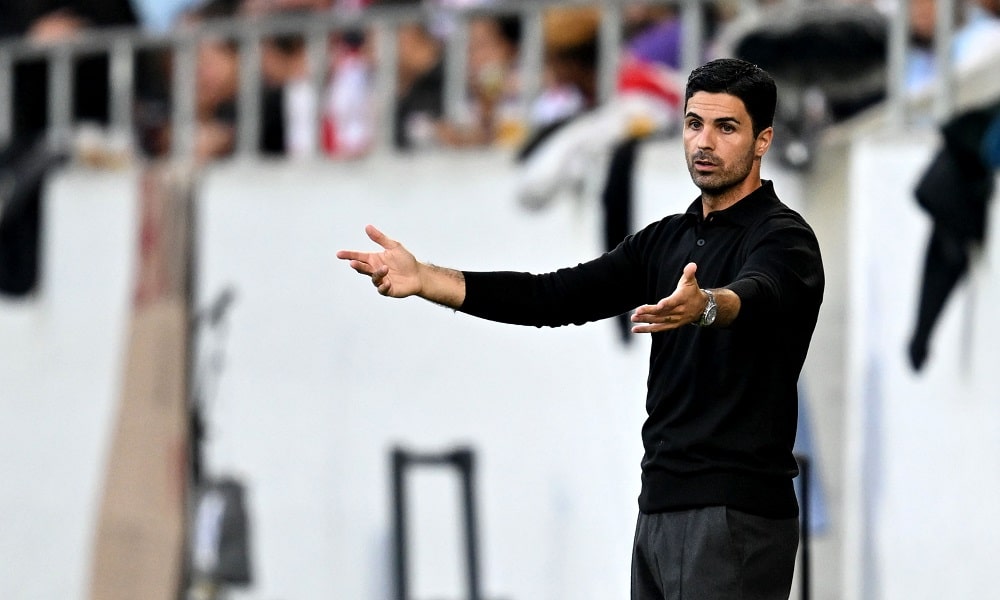 Since Mikel Arteta gets in a tizzy when a Brentford player makes a harmless joke about a nice kickabout, presumably the Spaniard is really going to go off the deep end if Antonio Conte’s side get the better of his boys. Arsenal currently head the league table, but Spurs are just a point behind; victory here would see Tottenham go top.

In fairness, it’s more than a decade since Arsenal were last beaten at home by Spurs in the Prem. Last season the Gunners won this fixture 3-1, and four of Tottenham’s five league wins in this campaign have come on home turf.

All three of Arsenal’s home wins in this campaign have seen them concede a goal, though. And Arsenal to win and Both Teams To Score would have paid off in three of the last four Prem meetings at the Emirates between these sides; you can back an Arsenal win and BTTS at 27/10.

If you want something juicier, William Saliba is already becoming a firm favourite with the Gunners’ support. The defender has scored twice already this season, most recently in his last outing – though he’s yet to score at home.

The Frenchman may be able to get on the scoresheet against Tottenham, and is 14/1 to do so…

Each of these teams has shown they can be capable performers this season; Brentford possibly more so than the hosts, but since Scott Parker’s departure the Cherries are unbeaten in three matches. As for the Bees, they can impress or underwhelm from one appearance to the next.

Perhaps Bournemouth’s Danish striker Philip Billing can continue to bring home the bacon, though. He’s found the net in each of his last couple of outings for Bournemouth, even if he hasn’t scored at the Vitality Stadium since November. Time to fix that? Billing is 10/1 to open the scoring on Saturday…

It’s Graham Potter’s first league game in charge with Chelsea. Can the former Brighton man pick up a win right off the bat?

Perhaps not. The Englishman must know he’s under pressure to deliver wins with the West London side. But it’s widely acknowledged that Potter’s approach could take a while to bed in.

If the players are amenable to his efforts, perhaps Potter can quickly restore Chelsea’s ability to bulldoze the opposition. But having joined the side just before an international break, the new coach hasn’t had a whole lot of time to communicate his ideas.

And for all the good work Potter clearly did in improving Brighton, his former side won just 12 league games last season. The Seagulls drew plenty of games – and the coach started his tenure at Chelsea a few weeks ago with a draw against RB Salzburg in the Champions League, too.

The 48-year-old may go on to be a legendary figure at Stamford Bridge – but regardless, Potter could still be in for a bit of a bumpy start.

A couple of seasons back, Tuchel’s Chelsea came back from an international break in sluggish style – and lost 5-2 to West Brom, improbably. It’s not out of the question that the Blues might not be at their best for this match, either. Backing Palace or the draw at 26/25 is worth a look.

Newcastle’s bid for world domination seems to be taking the long way round. The Magpies have won one league match all season, while five of their seven league games have seen them score one or fewer goals.

It’s a bit underwhelming. Fulham have been surprisingly fiery, meanwhile, sticking three past both Brentford and more recently Forest, and in Aleksandar Mitrovic featuring a striker on a bit of a tear.

If Fulham can beat Brighton and go toe-to-toe with Liverpool, why can’t they get a result against a Magpies side struggling for victories? The Cottagers are 43/20 to win.

Is Liverpool’s iffy start to the season in the process of getting back on track? Well, they did beat Ajax last time out. They’re unbeaten in their last three Prem games too. It’s not a terrible run – it’s more that to compete against Man City, you can barely afford a slip-up.

This week’s encounter with the Seagulls looks a good place for Liverpool to reassert some authority, at least. Brighton have lost influential manager Graham Potter, and replaced him with excitable Italian Roberto De Zerbi.

De Zerbi’s previous roles with Sassuolo in Serie A, and most recently Shakhtar Donetsk, have tended to offer plenty of opportunity for goals at both ends of the pitch.

That said, the Seagulls are unbeaten on their last two visits to Anfield, surprisingly. They drew last season and claimed a 1-0 win in February 2021. Does De Zerbi come in with a bang to leave Klopp and the Kop flabbergasted?

It would be an incredible start for the manager and a wonderful result for Brighton after losing Potter. And it’s not unthinkable, given Liverpool’s lack of oomph in recent months.

Still, with De Zerbi’s reputation for games that produce goals, maybe it’s better to stick to the Overs market. Over 3.5 goals is a 6/4 shot.

Otherwise, Brighton have scored on each of their last three visits to Anfield. If you think that pattern continues this week, it might be worth backing Alexis Mac Allister to score at 11/2; he scored a brace last time out (and had another fine effort chalked off for offside) and has four goals in his last four appearances for Brighton.

The Saints have lost three of their last four matches; can they fare better against an Everton team that claimed their first win of the season just before the international break?

Despite that long wait for a win, the Toffees are unbeaten in their last five outings. But the side are still lacking up front, having failed to score more than a single goal in any match this season.

With Saints drawing blanks in recent meetings with Villa, Wolves and Man Utd, this could be another game short on goals. Under 2.5 goals is a 4/5 shot.

West Ham have scored three league goals all season. Wolves have also scored just three league goals since the campaign started. This is the rip-roaring return from the international break that’s set to light up our screens for Saturday’s teatime kick-off?

If you get your kicks betting on which match is set to provide the fewest goals, go nuts; perhaps it’s worth backing the 0-0, which is a 17/2 shot.