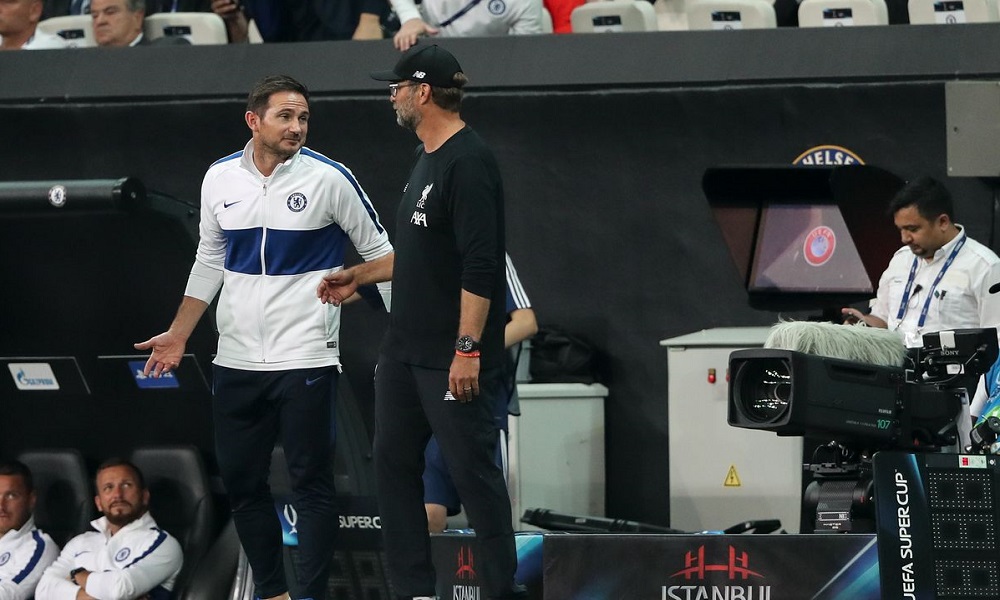 Frank Lampard’s Chelsea host Liverpool in the standout match of the fixtures this weekend – but before that climactic Super Sunday encounter, there’s plenty more football to come.

Despite last weekend’s results just about breaking our man’s spirit, in a triumph of hope over experience he’s back with another punter’s preview. And if Man City get dicked by Watford this week we’re assured he’ll formally tender his resignation on Monday.

Four of the last five matches between these two sides have ended in draws. Backing that outcome this week, you’ll get odds of 5/2 with 32Red – or you can get 11/20 backing Both Teams To Score, which seems a reasonable bet given each side is in reasonable form, goal wise (each team has drawn just one blank so far in the current campaign).

It’s less than three years since Spurs gave the Foxes a thrashing at the King Power, winning 6-1 back in May 2017 – but even if Tottenham haven’t been totally toilet this season, there’s definitely something lacking. Leicester laboured without reward against Man Utd on Saturday, though, so we’re not sure Brendan Rodgers’ side offer much value either.

Here’s a thing – all three of Spurs’ away games this season have ended 2-2. The law of probability tells us this almost certainly can’t happen for a fourth game running, but screw probability – we’ll be rooting for another 2-2 scoreline at 21/2.

If you’re not convinced by that rationale, how about this nugget of info – all but one of Spurs’ games played so far this season has featured exactly four goals. Leaving aside the reminder that past performance is not an indicator of future outcomes, you can get 2/1 on over 3.5 goals.

Dreary old Burnley haven’t won a game since the start of the season – will they fancy their chances of bringing the high-flying Canaries down to earth after last week’s heroics against Manchester City?

Maybe they should. Norwich have lost all their away fixtures so far this campaign, and Burnley’s pragmatic approach could reap rewards if they succeed in shutting up shop and waiting patiently for the right moment. Burnley are 49/50 to take all three points.

The Toffees might not quite be clicking under Marco Silva on the road, but they’ve won each of their last six games at Goodison Park. On home turf, they can surely make short work of newly promoted Sheffield United. Everton are 4/6 to win.

City atoned for their shock loss to Norwich with a straightforward Champions League win on Wednesday. But there’s talk of an injury crisis at the club after John Stones suffered a muscle injury, joining Aymeric Laporte, who will be out until the new year.

Nonetheless, it would be really be a stunner if City were unable to take all three points here. Watford held Arsenal to a draw last weekend and could have won, but the new manager effect attributed to the returning Quique Sanchez Flores will surely be curtailed by City on Saturday.

History doesn’t look to be in Watford’s favour, with 14 losses and two draws in the last 16 meetings between the two sides. Pep Guardiola’s side might be looking to rack up a few goals, here, too; they famously beat Watford 6-0 in last season’s FA Cup final, and might be looking to blow off some steam here. City are 19/1 to win 6-0 again. If that seems too optimistic, you can back City to score over 3.5 goals at 6/5.

A good opportunity for Brighton boss Graham Potter and his team to receive a winning boost, following recent frustrations. The Seagulls are 41/20 to win outright, or 7/1 to win 1-0 – the same scoreline which they triumphed by at St James Park last October.

Poor at home, Palace took a beating at Tottenham last week and may be keen to put an emphasis on keeping it at tight at the back on Saturday. This one could end goalless – backing 0-0 is available at 13/2.

Man United have scored just a single goal in each of their last five matches. Do West Ham have the firepower to outgun Ole Gunnar Solskjaer’s side? Unbeaten since the first day of the season, I’m tempted to back the Hammers against a Manchester team that still seems a little sluggish. Back the Hammers to win at 9/4.

Arsenal’s defence always seem capable of a horrendous rick, but the Gunners have blown Villa away in previous visits and on the back of a decent away win in the Europa League on Thursday, Unai Emery’s side should take this one comfortably. Arsenal to win both halves is available at 9/4.

This has to be a goalfest, and Liverpool are the favourites to win – which makes sense, given the Merseyside team have won 14 straight Premier League games on the bounce.

Chelsea scored five last weekend of course, but they have also conceded at least one goal in every game they’ve played under Lamps; taking on the best team currently playing in the Prem, the West London side could get a kicking. Back the visitors to win at evens, and give over 4.5 goals a whirl at 18/5.

All about Erling Braut Haaland – get the lowdown on football’s latest wonderkid
Manchester United defeats: Six times the club were absolutely rotten in the post-Fergie era