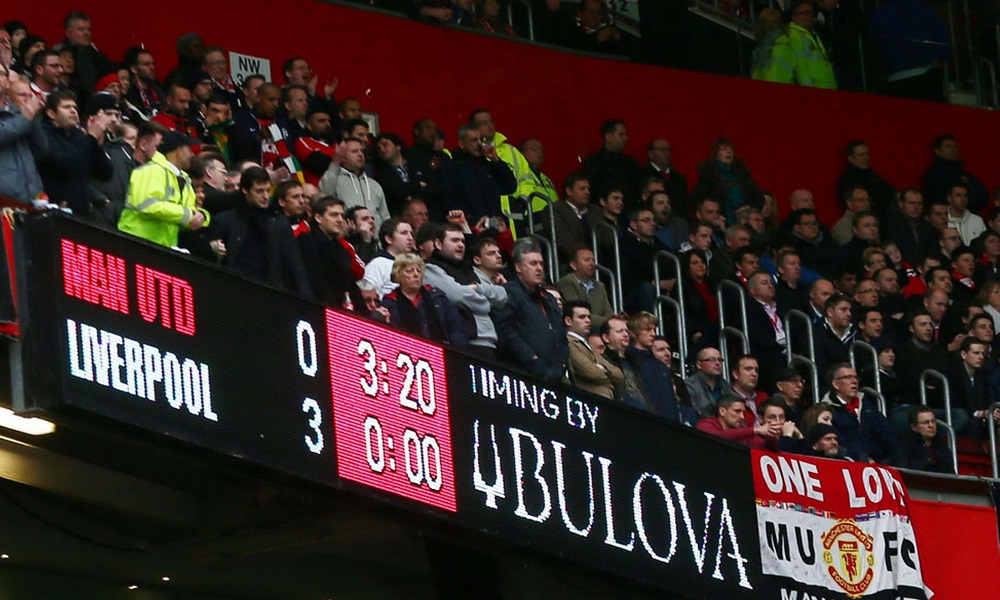 For long years, Manchester United were the irresistible force of English football, an irrepressible engine of excellence that barely understood the concept of defeat. Then David Moyes took over from Sir Alex Ferguson, and things changed.

Despite hundreds of millions spent on new transfers, and respected managers like Louis van Gaal and Jose Mourinho attempting to steer the Man Utd ship in the right direction, it’s fair to say things aren’t looking rosy for the Manchester side.

With Old Trafford legend Ole Gunnar Solskjaer at the helm, the side lost away to West Ham at the weekend in a performance bereft of pizazz. In fact, Man Utd haven’t won on the road since they beat Paris Saint-Germain in the Champions League back in February.

Solskjaer’s side are currently looking a bit of a shambles – and supporters of other clubs don’t have a whole lot of sympathy. But cheer up Ole – it’s not all on you. Here are six of United’s most risible performances since Fergie bid farewell. 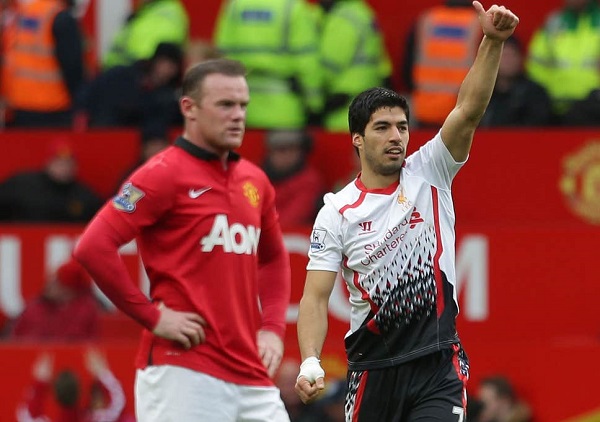 They normally play This Is The One by The Stone Roses when the sides come out at Old Trafford. For this match, fellow Manchester indie icons The Smiths’ I Know It’s Over might have made for more appropriate entrance music.

Prior to this match, David Moyes’ Manchester United dream had already faded, the former Everton manager surely painfully aware that he was out of his depth. With the home side desperate for a big performance, Rafael gifted Liverpool an opportunity with a handball to give Steven Gerrard the chance of a penalty which he duly dispatched – one-nil.

Inside the space of 30 seconds of the second half, Phil Jones had conceded a second penalty, with Gerrard stepping up once more – and converting, naturally.

Amazingly, Gerrard spurned a third opportunity, missing from the spot after Nemanja Vidic’s dismissal in the 77th minute for a challenge on Daniel Sturridge – not that the miss mattered. Luis Suarez would make it three in the 84th minute to complete the Manchester misery.  Moyes would plod on in charge for another month before ‘the chosen one’ was unceremoniously dumped. 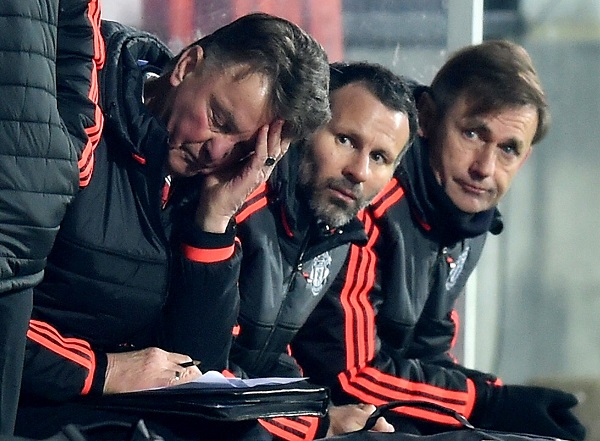 By this point, Louis van Gaal had had the best part of two seasons to get to grips with the Manchester United job. Under the circumstances, you’d think his side would have fared better against Danish hopefuls Midtjylland in the Europa League. Then again, United had warmed up for this game by losing 2-1 away to Sunderland.

There were extenuating circumstances for a defeat to the minnows from Denmark. United had lost David de Gea minutes before the start, the keeper injuring himself in the warm-up. Wayne Rooney was also out with an injury. But even with those absences, United should surely have held their own against this opposition.

After serviceable chances for the home side, Utd would take the lead in the 37th minute with a scrappy goal from Memphis Depay. But Pione Sisto scored a more memorable goal at the other end past replacement keeper Sergio Romero just before half-time, and in the 77th minute, Ebere Onuachu evaded the ineffectual efforts of Juan Mata to slot one home from just outside the box.

To provide some context, earlier in the season Midtjylland had lost 4-1 at home to Napoli, and 5-0 away. As for United, possibly their most memorable moment in this game was being forced to take the second half kick-off twice, after the team failed to move the ball forward with their initial attempt. Much like some kind of crazy metaphor for the modern Man Utd. 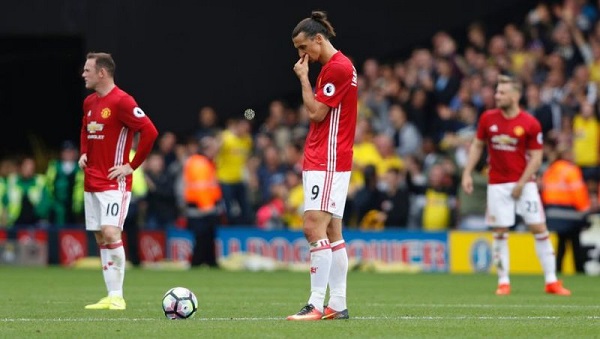 By now Jose Mourinho was leading United, the club having given Van Gaal the boot just nanoseconds after he’d steered the club to FA Cup glory, which seems a bit ungracious. Never mind though, because with easy-going Jose at the helm it would be all sunlit uplands from here, right?

After winning his first three league games in charge, United had lost to neighbours Man City and then Feyenoord in the Europa League to undo some of the fleeting feelgood factor that Mou’s appearance at the club had generated. Would a trip to the Hornets offer a chance to restore some confidence?

Would it heck. Etienne Capoue opened the scoring for the home side in the 34th minute, with Marcus Rashford finding an equaliser in the second half with 30 minutes still to play. Stage set for a classic United comeback?

Alas, no; instead, substitute Juan Zuniga scored a second for Watford after being on the pitch less than a minute, with Troy Deeney slotting home a pen in stoppage time to consign United to their third defeat in the space of eight days. In fairness, United would improve to some extent as the season progressed, winning the Europa Cup – still, this was a wretched afternoon for the club. 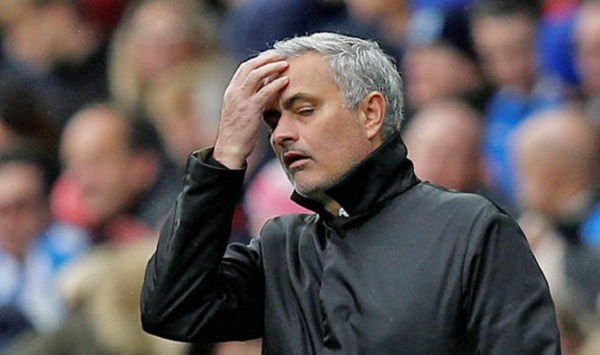 United would finish second in the league this season – a feat Mourinho later described as “one of my biggest achievements,” presumably as a way of saying “what do you expect me to accomplish with this shower?” But if this was Mou’s finest season in Manchester, there was still the odd howler in this campaign. Case in point being this loss to Huddersfield.

Aaron Mooy scored the opener for the Terriers in the 28th minute, with Laurent Depoitre following up five minutes later. Though United had 80% of the possession, and Marcus Rashford would score a consolation late in the second half, Huddersfield Town maintained their lead to claim a first league win over United since 1952. Mou’s verdict? “I don’t even remember a friendly match where our attitude was so poor.” 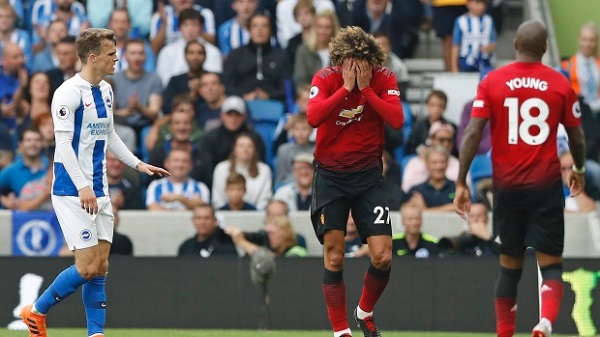 Entering the endgame of Mourinho’s time at Man Utd – and to date, his coaching career – just two games into the new season, the visitors found themselves two down before half an hour had passed, Glenn Murray then Shane Duffy scoring for Brighton within three minutes of each other.

Lukaku pulled one back shortly afterwards, but Pascal Gross scored a penalty at the end of the first half to restore the Seagulls’ two-goal lead. United were unable to overturn that lead in the second half, despite Pogba scoring a penalty deep into stoppage time to make the score slightly more respectable. Having defeated United at Old Trafford the previous season, Brighton were making a habit of spanking the Mancs.

Things wouldn’t get much better for Jose. A week later, the side would lose 3-0 at home to Tottenham, Mourinho resorting to banging on about his past achievements in a bid to divert attention from his current shortcomings. It didn’t work; by December, the petulant Portuguese had been sacked. 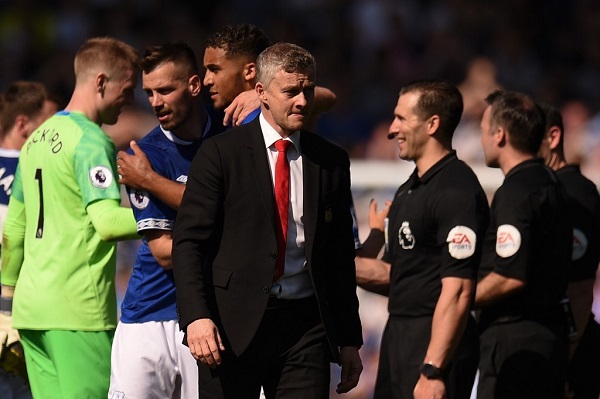 Enter Ole. After the all-pervading funk that surrounded United following Mourinho’s stint with the club, Ole Gunnar Solskjaer was clearly just happy to be involved. The Norwegian was a permanently perky presence, repeatedly referring to the glorious Fergie years – and to start with, overseeing a run of wins that suggested Utd were finally back on the right lines.

Sadly the new feel-good factor was decidedly short-lived. Barely had that man with the Midas touch in reverse, Ed Woodward, upgraded Ole to a new, permanent deal, than the results started to slide. There are plenty of poor moments to choose from, but a 4-0 loss to Everton at Goodison Park was a pretty momentous failure.

Richarlison opened the scoring in the 13th minute with a volley, Gylfi Sigurdsson firing home from outside the box in the 28th minute to make it 2-nil. In the second half, Lucas Digne and Theo Walcott contributed goals of their own for a 4-0 drubbing.

So incensed was Gary Neville with United’s fifth away defeat on the bounce, the former United captain was reduced to making obscure gardening metaphors, suggesting the foundations of the United house had been attacked by “Japanese knotweed”. More like the Norwegian wood simply isn’t up to the task, Gary.

Solskjaer failed to win any of his remaining four games of the season, ending the campaign with a miserable defeat to Cardiff, 2-0 at Old Trafford. It hasn’t gotten much better since the start of this season, and many believe Solskjaer will exit the club in the next few months.