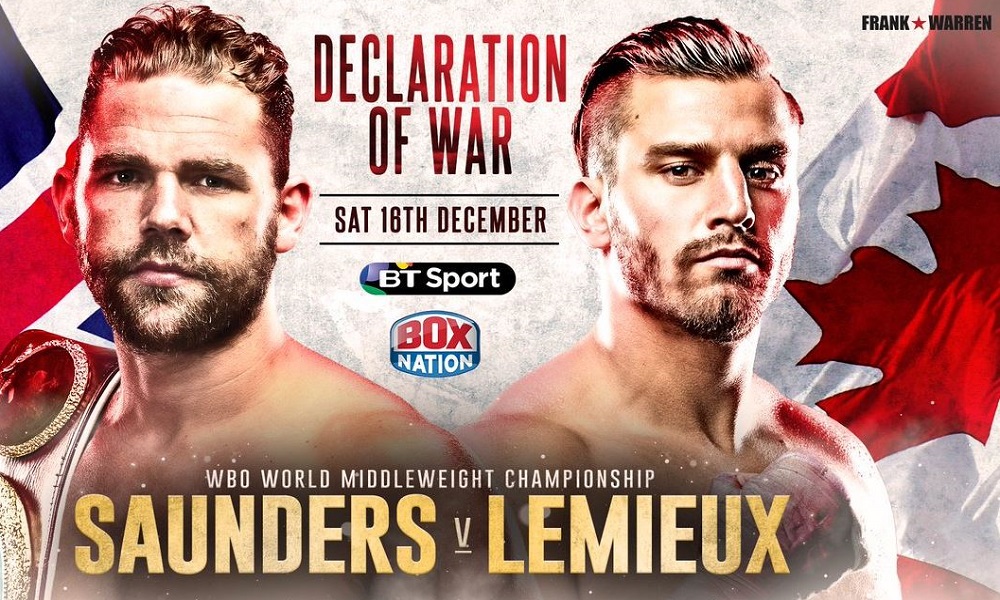 It is the classic “boxer vs. puncher” match up. Unbeaten Saunders (25-0, 12 KO’s) is looking to box his way towards a 2018 super fight with with Saul ‘Canelo’ Alvarez or Gennady Golovkin. To get there, he must stay away from Lemieux’s devastating power and utilise his slick southpaw skills. Lemieux (38-3, 33 KO’s) is the most dangerous opponent Saunders has faced to date and will be roared on by a fanatical home support.

32Red caught up with eight of British boxing’s most well informed and promising fight figures to gauge opinion on the intriguing battle.

It’s not gonna be an easy fight for Billy. If he goes over there and puts in a performance he starts turning himself into a worldwide superstar in terms of boxing. It’ll get him widely known. He’s in there with a live, dangerous opponent though.

He can’t afford to switch off for two seconds and he’s got to carry on boxing throughout. He always looks good in the first half of a fight but he sometimes gasses. I’ll pick Billy Joe to go over there and win on point, similar to when he boxed Andy Lee. Some people thought Lee might catch him and knock him out but Billy managed to dance around him and make him look daft. I’d probably presume it’ll be similar to that.

I think Saunders will win. I think he’ll give him a bit of a boxing lesson. Lemieux will try to put pressure on him and try throwing big left hooks but I think Billy Joe will use his right jab and hit and move. He’ll be as awkward as he can.

Billy will have prepared well in camp and he’ll have prepared his mind for Lemieux’s power. I know for a fact he won’t have underestimated the power either. Billy’s back in his groove. He’s got a new trainer who he seems dedicated to. You can see how dedicated he is because he has abs and looks good in camp. They’ll have done a lot of drills and a lot of repetition work and I believe Billy Joe will win.

I think Billy Joe will win on points but my only worry is whether he’ll get the decision. Billy Joe is hard to catch clean. He’s boxed all around the world as an amateur and he did it when he was a young man. He wasn’t an older experienced fighter when he was boxing in those foreign countries. He’s with the Ingles now and they’re also used to fighting on big shows abroad. I don’t think Billy will be phased by boxing in Canada at all.

Billy doesn’t tend to dominate rounds. There might be a few rounds when he just does enough and although anybody watching it fairly would score the round to him, whether the judges in Canada do is another story.

I think Billy Joe will outbox him over twelve rounds. Whether or not he gets a decision in Canada is another thing but I just feel that he has the superior boxing skills and movement to keep Lemieux at a distance.

I think we’ve yet to see if Billy can take Lemieux’s power. He hasn’t really been hurt with much. I think Eubank Jnr hit him once or twice to the body if I recall correctly but other than that we haven’t seen him in trouble. Lemieux is clearly the harder puncher he’s been in with but I think Billy will use his smarts to ride the punches and not really catch them flush.

This is a tough one but I think I’ll pick Lemieux. I think he’ll get him. I think he’s an underrated boxer and he’s a very hard man. He took some big shots from Gennady Golovkin the night he fought him and he didn’t go down easily. He’s also got real power.

Billy has been in with people like Eubank but he hasn’t been in with anybody who hits as hard as Lemieux. I know Saunders is a southpaw and Lemieux is orthodox but he has that big left hook which is a good shot against a southpaw. Billy Joe is hard to hit but Lemieux only needs to half hit somebody and they go.

I’m gonna go for Billy Joe Saunders on points. I think he’s gonna outbox Lemieux and he’ll be able to keep him well off the angle when he comes in trying to land his power punches. Billy Joe would be a fool to stand there and try to trade punches with him but I don’t think he will. I think he outboxes him and beats him on points.

I think it’ll be a unanimous decision for Billy Joe.

Obviously I think Billy Joe has the capability to outbox him but I don’t know if he can stay away from him for twelve rounds. I think there will be a point where Lemieux could catch him and he’s a thunderous puncher. If the Curtis Stevens knockout had happened before he fought Golovkin, everybody would be salivating over that fight.

Billy Joe is a true fighter. No matter what he says some days on Twitter and the fact that he’s known as a boxer, he’s a fighter. I don’t think he’ll go into his shell if he gets caught but it depends how cleanly Lemieux catches him.

I do fancy Billy Joe though. I think he can sneak a win. I don’t think it’ll be easy and it won’t go his way all the way through the fight but I can also see Lemieux catching him and if he hits anybody clean, they’re going down.

I’m going for a tight points win for Billy Joe Saunders. I don’t think Lemieux has fast enough feet to trap and KO him, which he’ll need to do.

I rate Billy and when he’s on it he is very hard to beat and Lemieux won’t like his southpaw stance. There are two reasons why I predict it will be tight. It’s in Lemieux’s back yard and Billy nearly always slows down the stretch although, to be fair, he usually has a handy lead.

This fight takes place during the early hours of Sunday morning – to see our latest boxing markets, check out 32Red Sport here. If you’re up for a flutter on table games or the slots, be sure to check out our award-winning casino too!