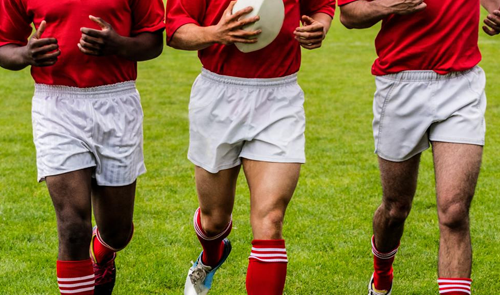 This weekend is the fourth round of the Six Nations, with England hoping to beat Wales at Twickenham tomorrow to earn the Triple Crown for the 25th time. So ahead of the crucial 4th round matches, we’ve rounded up the five greatest tries in Six Nations history.

James Robinson, also known as Billy Whizz for his lightning fast speed, has scored some absolute beauties for England. But this try in 2004 definitely tops the list. When Italy kicked the ball right into Robinson’s hands on the 10-metre line, Robinson then passed it to Lewsey on the wing, who then swung it back to Billy. The Whizz then performed some nifty footwork to outflank his opponents before making one hell of a sprint half way down the pitch to the try line.

Considered rugby’s greatest ever player, Gareth’s brilliant try against Scotland has become one of the most iconic in the game. Gareth received the ball deep in his own half before sprinting more than 70 yards down the pitch. He chipped the ball past the Scottish defence and then famously dived into the left corner, only to emerge a few minutes later, drenched in mud.

Scotland’s clash with Wales in ’82 is one of the most memorable games in Six Nations history. The Scots hadn’t won at Cardiff Arms Park for 20 years, so the match marked a huge turning point in the rivalry. The ball had been going back and forth between the two sides for a while until Roger Baird swooped in and got his hands on it, inside Scotland’s own 22. After a quick succession of passes between Baird, Paxton and Alan Tomes, the ball was finally offloaded to Calder, who raced to the touchline, and scored an absolute corker.

Few tries in Six Nations history can rival Bennett’s brilliant effort in 1977, especially as it came at such a crucial time in the match. Wales were in the lead but Scotland were gaining momentum. Then everything changed when Phil Bennett worked his magic. Gerald Davies had outrun a few Scots on his opponents’ ten-metre line, then swung the ball onto Bennett, who offloaded it to his fly-half. His team-mate then swung the ball back to Bennett, who sprinted down towards the try line. And the rest is Six Nations history.

Rugby fans rarely see tries that start off with kicks. But this wonderful moment against England had three. When England failed to convert a penalty, Blanco launched a counter-attack from inside his dead ball area. The Frenchman passed the ball to Sella who swung it on to Camberabero, who kicked the ball over England’s defence, and then again across the field. It landed in Saint-Andre’s hands, who made the final sprint to the try line. Not bad for a 105 metre effort!

Agree with our top five? Or have we missed any absolute corkers off the list? Let us know below!

And if you can’t get enough of the Six Nations championship, head over to 32redsport.com where you can bet on all the matches as they happen. Or if you want another way to relive all the action, visit 32Red.com and play our thrilling Rugby Star online slots game.